Over wintering at Kalamata Marina 2018/19

Easter time in the Cyclades

Delos: Another Time, Another Place, Another Sight!

Delos, a small rocky island just 5km x 1.3km might not seem the obvious place for what was, for the Ancient Greeks, a most sacred site due to it being the mythical birthplace of Apollo and his twin sister Artemis.

The Sanctuary of Apollo attracted hundreds of new inhabitants and visiting pilgrims to the island during C7/6BC and the hundreds grew to thousands as it later, C3/2BC, developed as trading port and slightly later still, C1BC, became the greatest commercial centre of the old world.

We decided to visit as part of our sail around the Cyclades – about which you will hear more in my next blog post – but for a couple of reasons I decided Delos was worthy of a post of its own.

Firstly it is, without doubt, a stunning place. The extensive ruins sprawl among the unspoiled natural landscape of the island…. 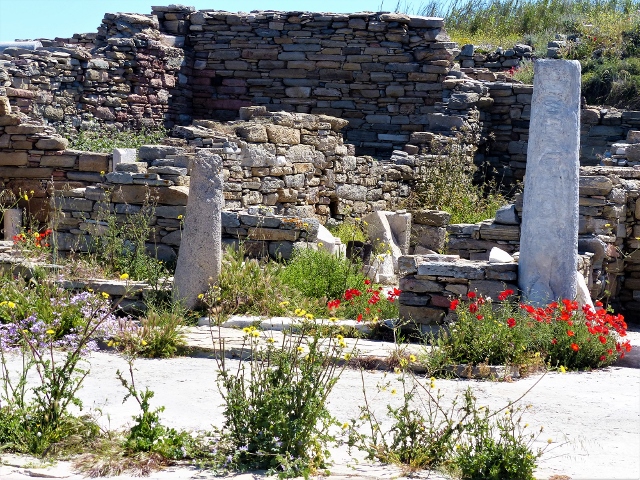 … which lies between the hustle and bustle of commercial Mykonos and the peace and quiet of the small island of Rinia where we anchored in a secluded and sheltered bay. 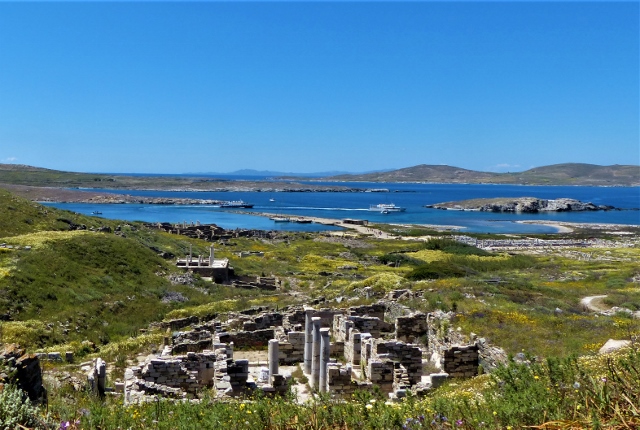 Fantastic view of part of ancient Delos with our anchorage in the furthest, just visible, bay on Rinia

Visitors and yachts wanting to anchor in the immediate proximity are only allowed during the site opening hours and Delos is uninhabited except for a few custodians, occasional visiting archaeologists, several cats….. 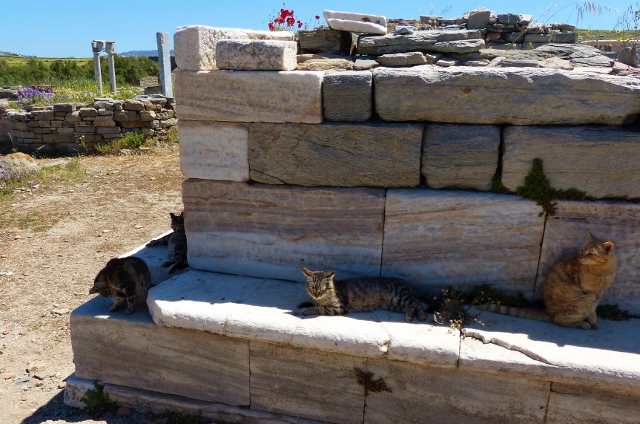 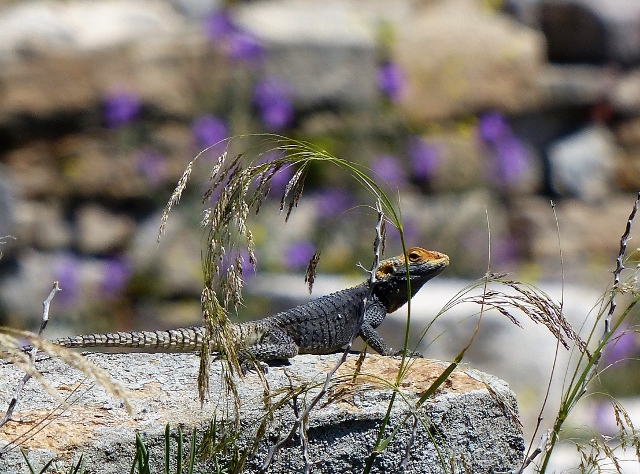 Secondly, having arrived by dinghy at what was once part of the old commercial port I was stunned to see this standing in the sea just off the ancient harbour quarter. 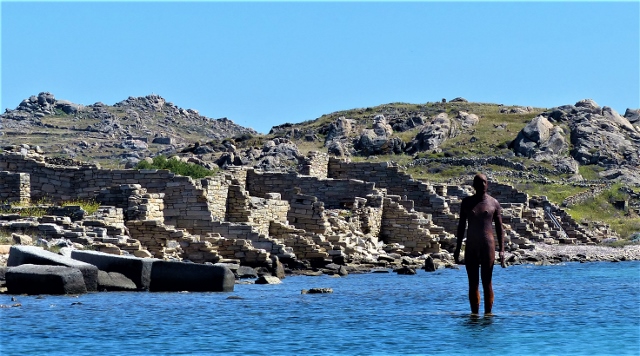 Those of you who have visited Crosby Beach, Merseyside you will no doubt recognise it as a “Gormley” though rather than being one of the figures in that permanent exhibition “Another Place”, this statue is actually entitled “6 Times Left”.

We soon found out what it was doing there. NEON, a Greek non-profit organisation seeking to bring contemporary culture to everyone had collaborated with the “Ephorate of Antiquities of Cyclades” and commissioned “SIGHT” – an unprecedented exhibition in Greece by Sir Anthony Gormley.

The exhibition runs from May to October of this year and, as we visited on 2nd May, we were there on the opening day, as was the man himself!! 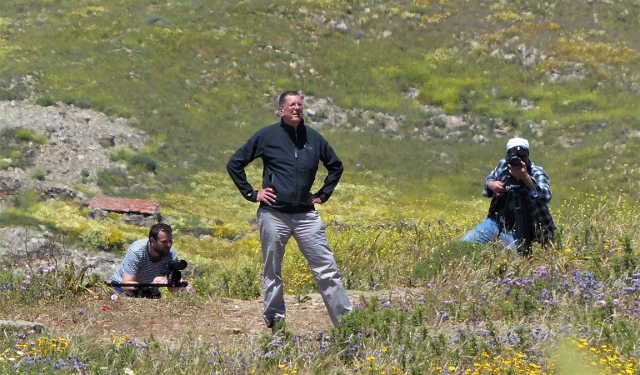 Unfortunately we had walked some distance away before my brain registered who I had just passed…..
…….as he was sauntering down the hill at the time rather than having his photograph taken and it didn’t seem quite right to rush back down to ask for his autograph on our pamphlet – though I wish now that I had!

The idea of the installation on Delos is to repopulate the island with human and other forms and to animate the geological and archaeological features of the site. The official pamphlet description of his work is that he “reinterprets the function of sculpture, transforming the traditional status and totems of the ancient world that once adorned public squares, temples and private dwellings into sites of empathy and imaginative projection”. As well as studying the site he also played close attention to the horizon and the topography and the placing of some of his installations reflect that. 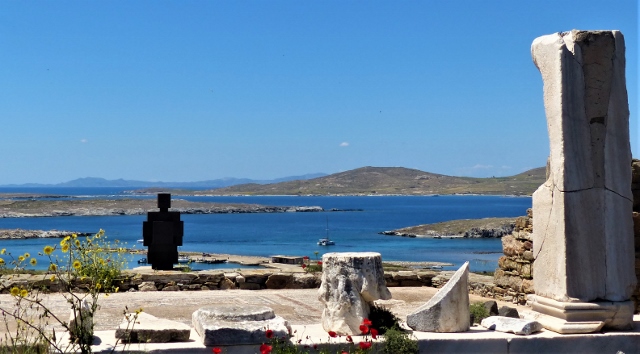 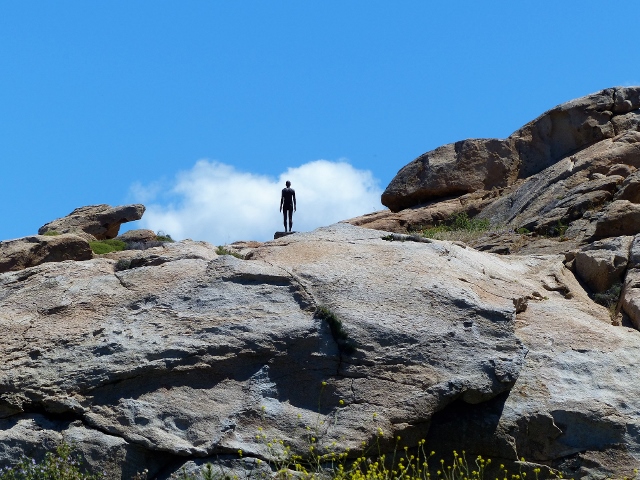 “Another Time XI” on Plakes Peak

The above is one of five of the original identical one hundred “Another Time” statues which form part of the Delos exhibition. In total the exhibition hosts 29 “Gormleys”, 5 of which he designed and created specifically for “Sight”. 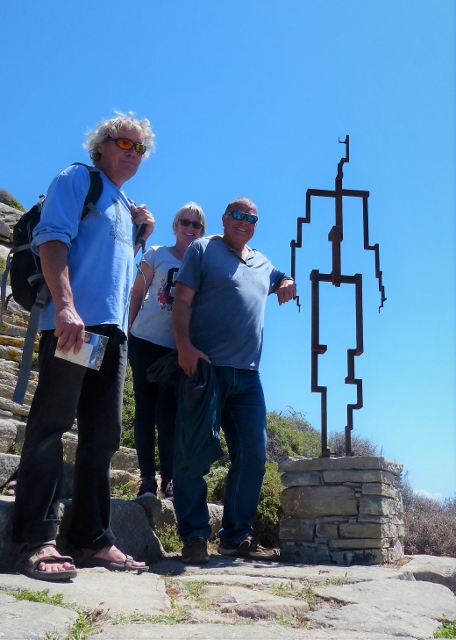 …. the “mountain” where fragments of the earliest settlement on the island have been found.

During the islands most prosperous era [mid C2BC] the Theatre Quarter was built with a paved road leading from the harbour to what was once a 6,500 seat theatre. 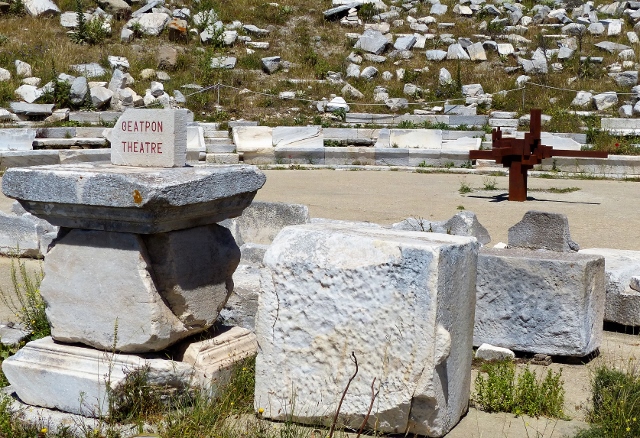 It was there that the aristocratic class built their homes, often trying to outdo each other in respect of ostentatious architecture or statuary. One tale of “Keeping up with the Jonopouloses” was told outside what was called “Cleopatra’s House” where a woman of that name lived with her rich husband. Their house was not the largest in the street and did not initially boast pillars or statues like their neighbours. Having an inflated opinion of her status she commissioned pillars which were actually too big for the hallway and stood statues of herself and her husband on inscribed plinths. His identified him as the man who bought the tripods which decorated the entrance to the Temple of Apollo, their purchase being another example of showing off!

In this quarter were also various houses now having names linked to the mosaics found in them such as the “House of the Dolphins”……. 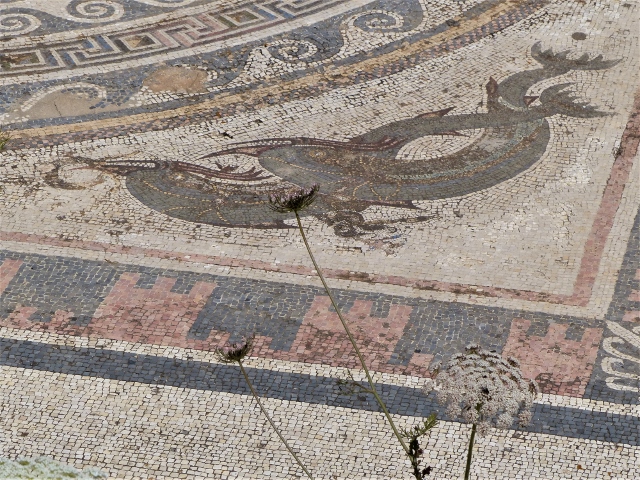 ….and the “House of Dionysus”, though unfortunately a shadow obscures what is left of Dionysus’s face and all I got was the Tiger! 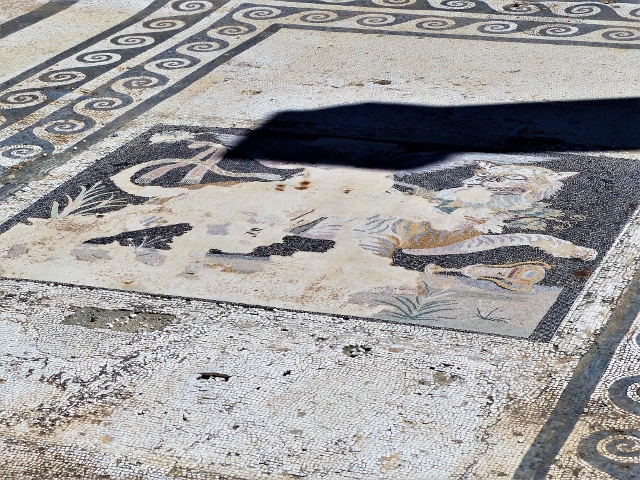 It was in this house that another site specific commission stood….. 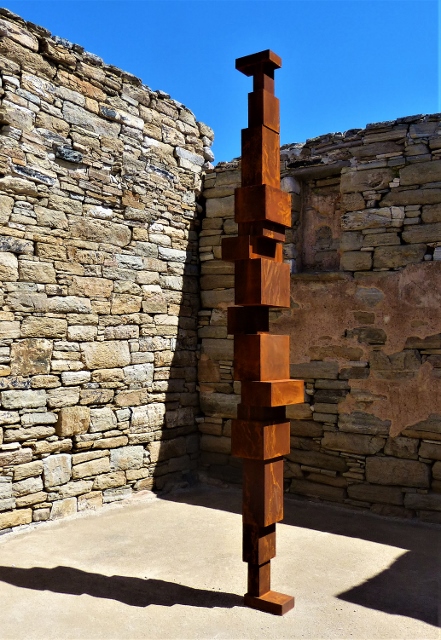 ….and several more sculptures were placed in the remains of other buildings in this quarter. 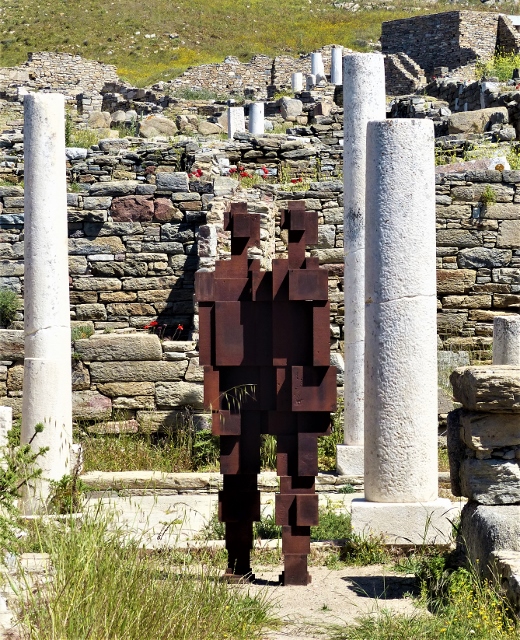 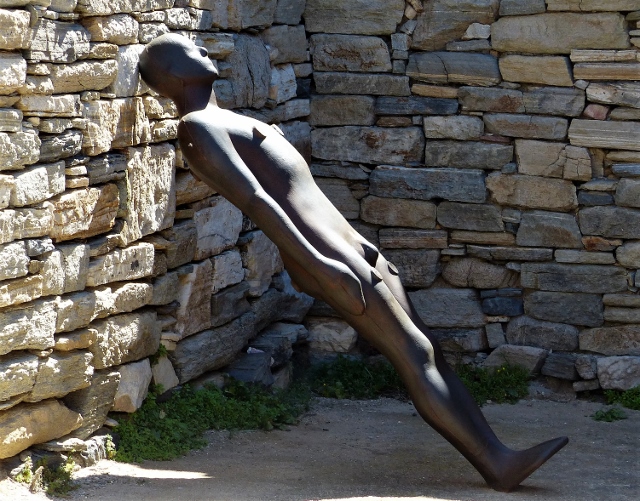 Another resident who commissioned and dedicated a monument was a man called Carystios”. He dedicated it to Dionysus and the plinth had a base relief of the god and his companions on one side. On the top was a large phallus…. 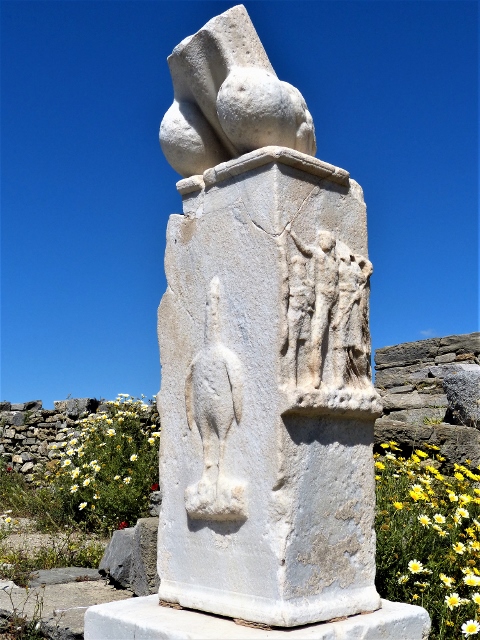 ….it must have been quite a sight to behold!

Scattered around the site are several other monuments and statues dedicated to people or gods…. 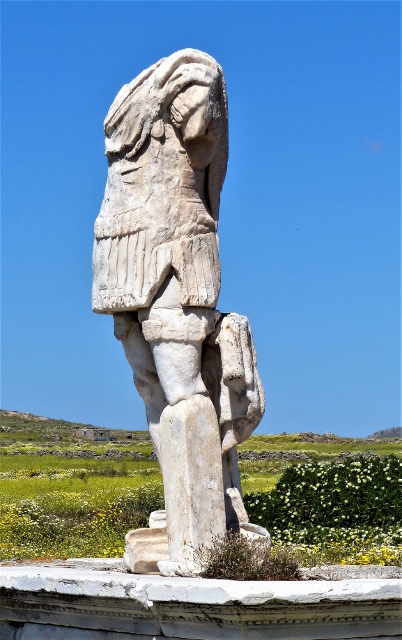 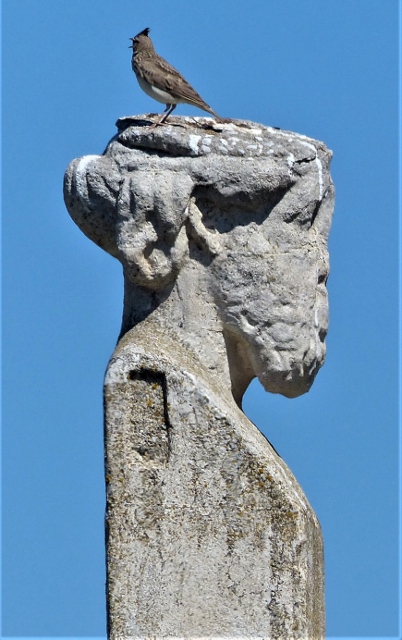 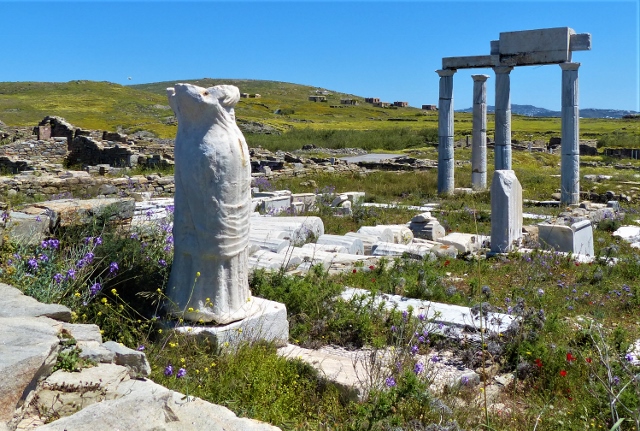 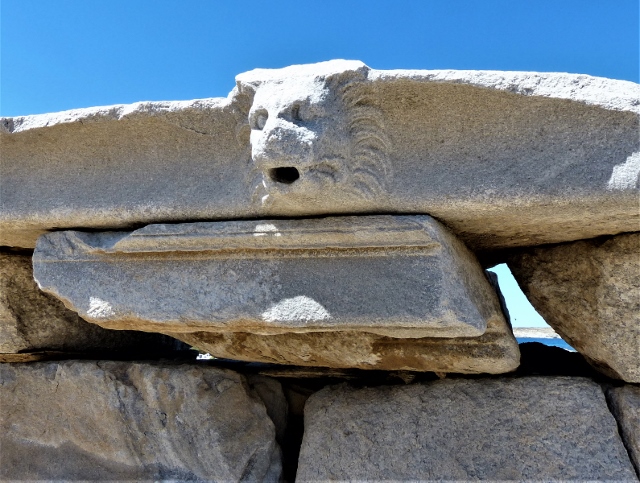 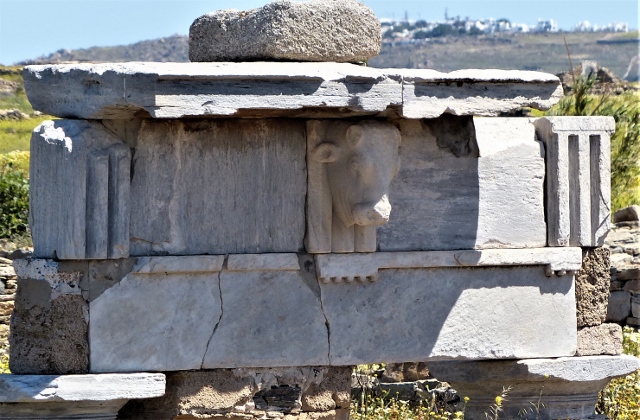 The Bull Monument in one of the Stoa

The most famous of these are the “Naxion Lions”, the remains of some of the originals now in the small on-site museum. 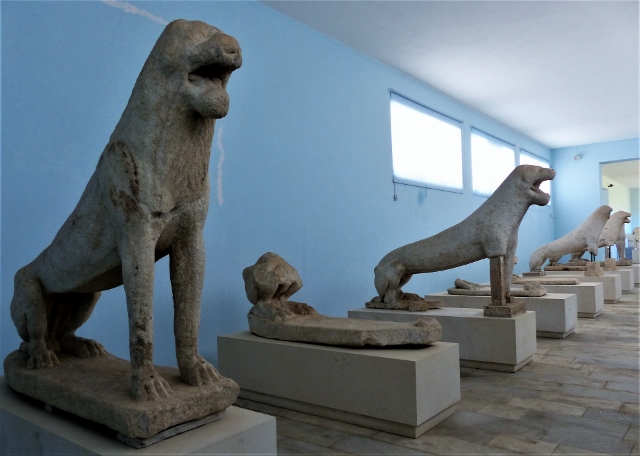 What remains of the original Naxian Lions

The Lions were dedicated to the Sanctuary of Apollo at its inception within the context of a huge building programme to demonstrate the supremacy of Naxos to all Hellenic pilgrims. They were placed on a natural terrace bordering the road leading from the north port to the sanctuary. Seated on their hind legs with their mouths half open in an eternal roar they must have been quite a formidable sight – especially as most pilgrims had never seen a lion. The number of original Lions is unknown but scholars variously estimate numbers between 9 and 19. To preserve the effect, plaster copies of lions found during excavation have been placed on high bases so that they are at the level archaeologists believe they would have been when on the terrace. 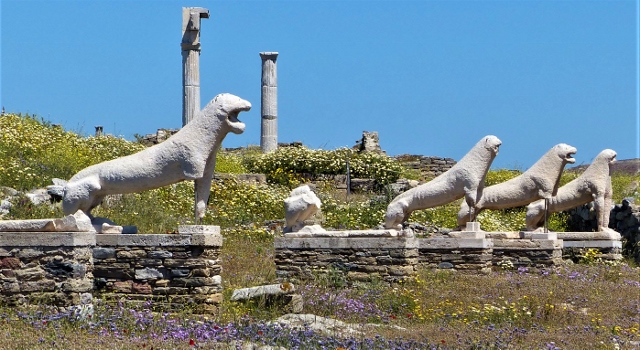 Once a magnificent sight … still amazing, even though they are replicas

At the opposite side of the site to the Theatre Quarter is the “Stadium Quarter” …. 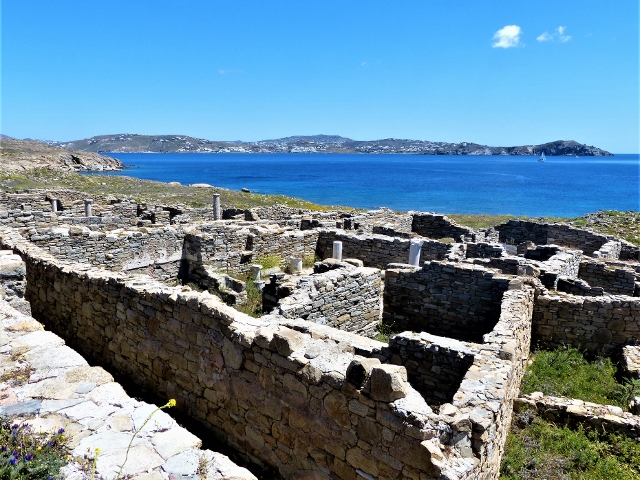 Remains of buildings in the stadium quarter

…. which as well as housing the Stadium also contained the Gymnasium with its many arched entrances. 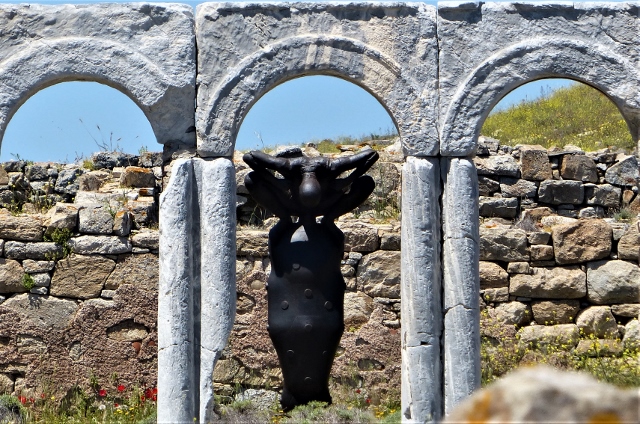 “Bearing III” in one of the Gymnasium doorways

Between these two quarters were various Stoa and Agora [shopping arcades and market places] where, after introducing tax exemption in the port in 167BC, goods from up to 7,500 arriving ships per year were sold. 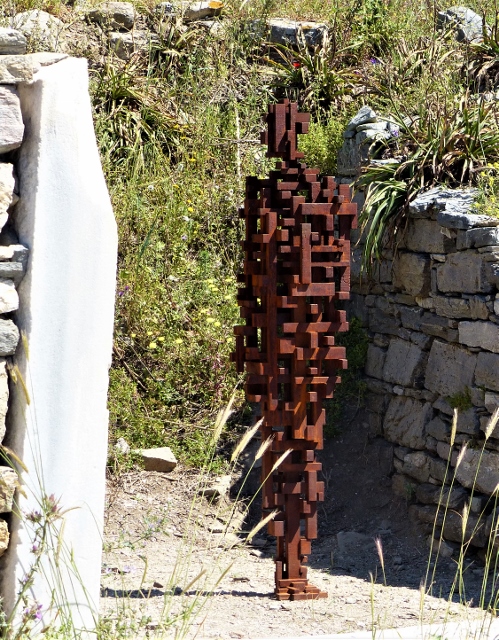 “Cast III” in the Competaliast Agora 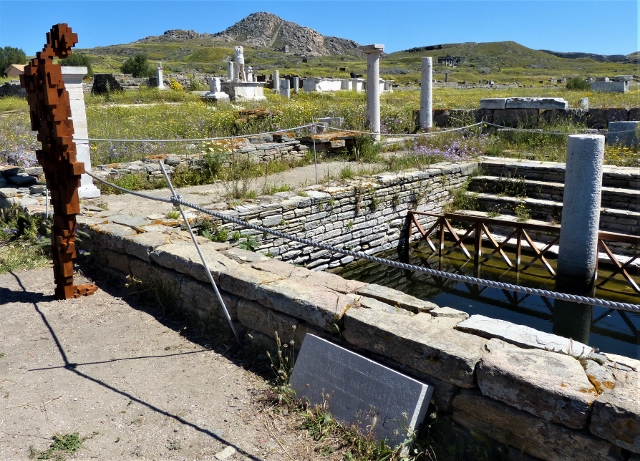 One of my favourites… site specific “Water” looking into the Minoan fountain near the Italian Agora.

It is in this area that the aforementioned museum plus coffee bar and gift shop now stand.

As I said, the museum is quite small but it contained my two other favourites, inside….. 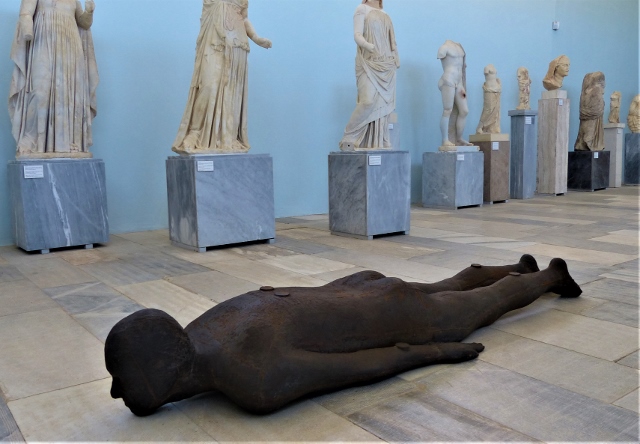 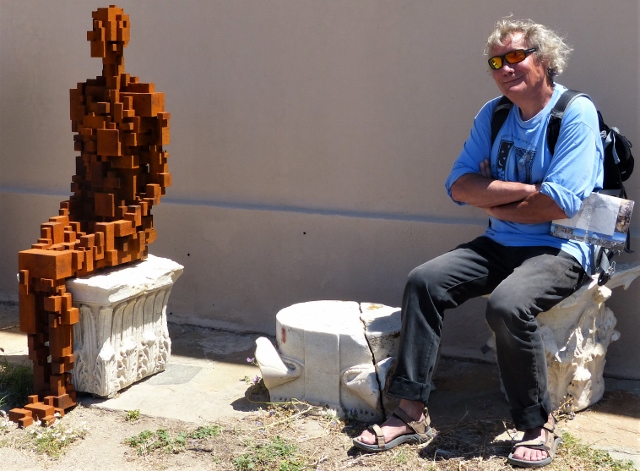 Mike and his new mate “Rule”- a site specific commission

It was a fantastic day out. Delos itself is fabulous but the addition of the Gormleys was a real, and most unexpected, bonus.

Permanent link to this article: https://www.sigasiga.co.uk/2019/05/21/delos-another-time-another-place-another-sight/