A new adventure begins…..and a visit from James

A Mystery Weekend with Dave and Margaret

Well, we are now in Italy working on the boat. However, contrary to what might have been your expectation, this post is not about boats or sailing or even Italy. It is mainly about a weekend we spent in the Yorkshire Dales – with a comment or two on Mike’s birthday first.

As there was no 29th February this year Mike had all the excuse he needed to have a minimum two day birthday. [In actual fact, he needs no encouragement for this and even makes sure it happens when there is a 29th February in the year!]. Anyway the first day [28th] dawned bright and sunny…..well, it always does in books, but the reality was it snowed. 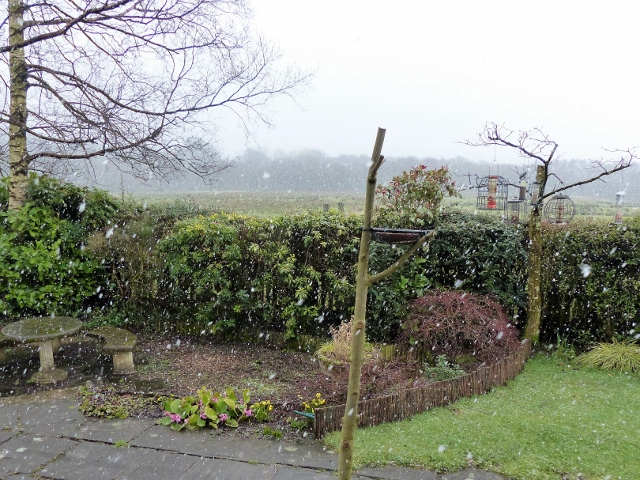 We had a lovely day just relaxing and eating fine food…… unfortunately another fairy-tale as the day was really spent plumbing and decorating. However, the fine food bit of the day lived up to expectation by way of a couple of juicy steaks preceded with an experiment on my part – caramelised onion and goats cheese tarts. What I lacked in technique I made up for with ingenuity. The finished product didn’t look quite like the photo in the recipe but tasted damn good- which is all that matters. 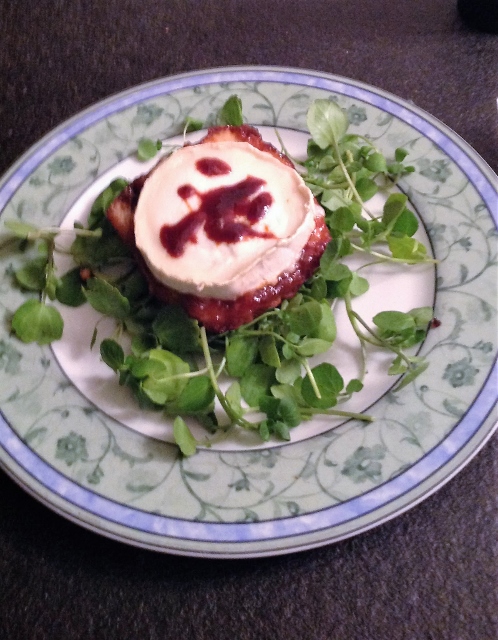 His second birthday [1st March] was very much like the day before – except we didn’t have the fine food. I guess we just weren’t up to celebrating properly this year, though we made a good attempt on other occasions like Cath and Mag’s joint birthday meal, an excellent evening of fine Italian food at Chris and John S’s, a great Indian meal with John and Kath, a visit to Lesley and Kath for Rugby and Campervan envy, a visit by Steve and Mary, several brilliant evenings in Winterley and finally a wonderful St Patrick’s night meal at Cath’s with Mags “Kiwi sorbet Prosecco” to put us in the mood. Well, it was a green drink! 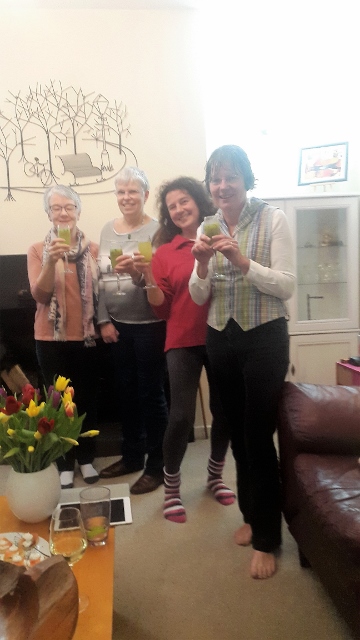 Despite the above mentioned snow, spring had arrived…. 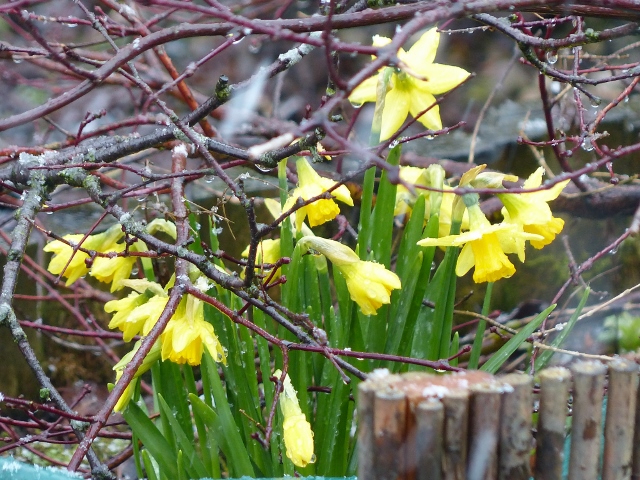 ……and we looked forward to a weekend we had planned to thank Dave and Mags for putting us up for almost 3 months. It is amazing that, despite a number of times when the experience hasn’t lived up to the imagination in relation to weather, I still plan in the belief that all will be hunky dory. So, what’s wrong with a walking weekend in the Yorkshire Dales in March? Well, nothing if we had gone on the weekend of the 10th March or the 24th but we had booked for the 17-20th and it rained and rained and when it wasn’t raining it was drizzling or pouring down!

That said – we therefore had good reason to spend time drying out and warming up inside a number of wonderful pubs. If memory serves me right we went to ten over the three day period – all of them traditional Dales hostelries full of character [and characters!].

We started out at “The Green Dragon” in Hardraw village and, after a couple of drinks to stimulate us, walked for all of five minutes to visit Hardraw Force which is situated within the pub grounds. 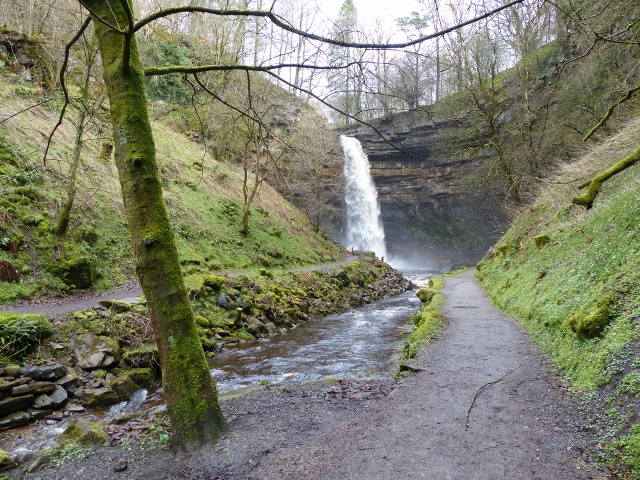 It is a pretty setting and the fall is quite spectacular… 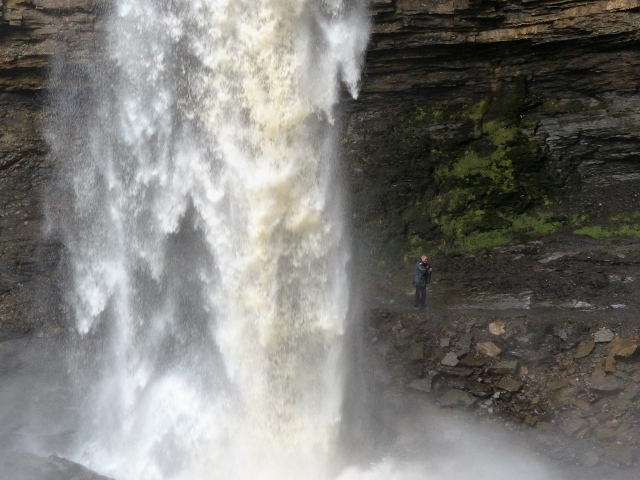 …especially when seen from behind. 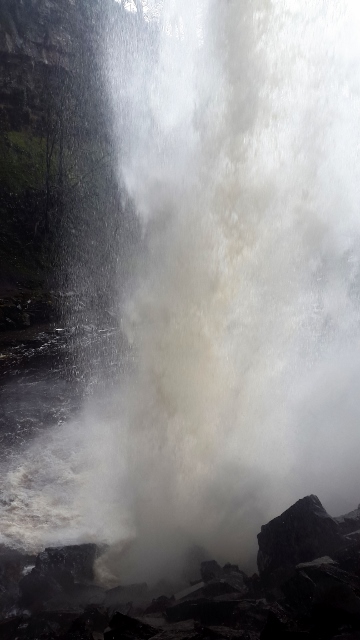 Well done Mike for volunteering to get very wet and to Dave and Mags who followed him. Determined to see if he could have got any wetter Dave also decided to play tight-rope walker across the remains of a bridge. 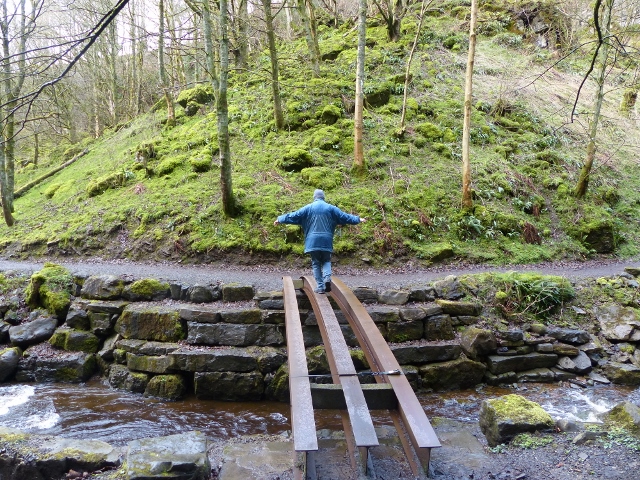 I am not sure I approve of having to pay to see the waterfall, but I suppose it is on someone’s land and, if you fancy owning it yourself, you may be interested to know that the pub and the waterfall are currently up for sale.

Our next stop was Askrigg Village…. 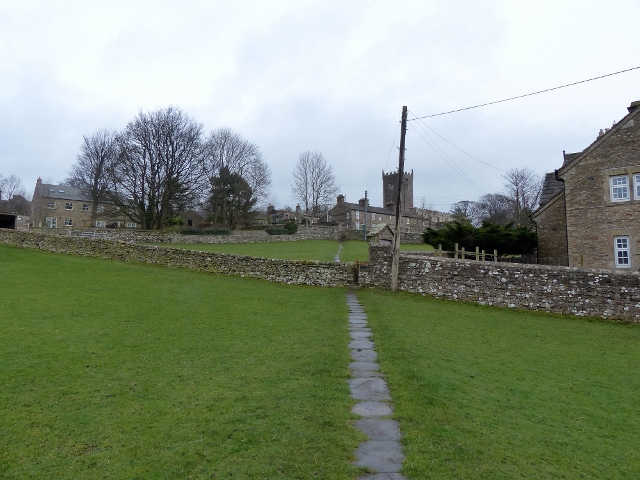 …. where, having found the correct path at our second attempt, we walked a four mile circuit taking in the “free to view” Askrigg falls…… 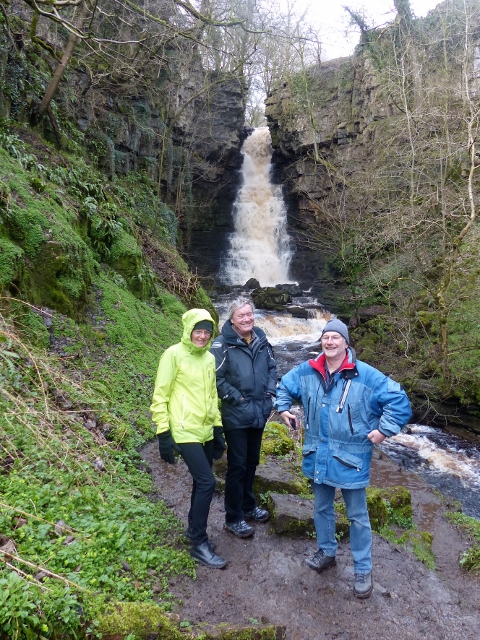 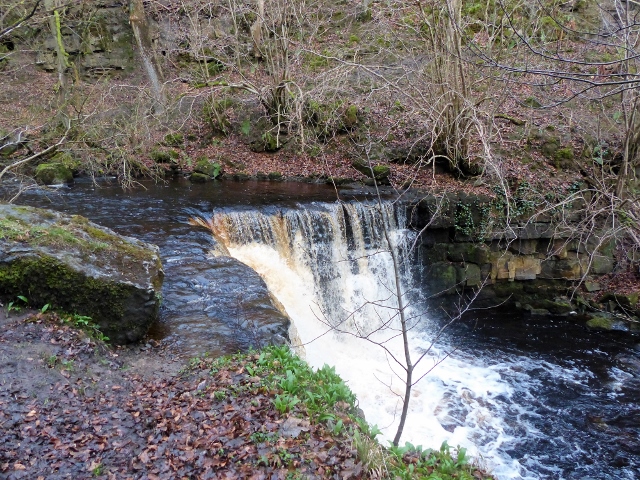 ……before climbing up to Low Straights Lane…. 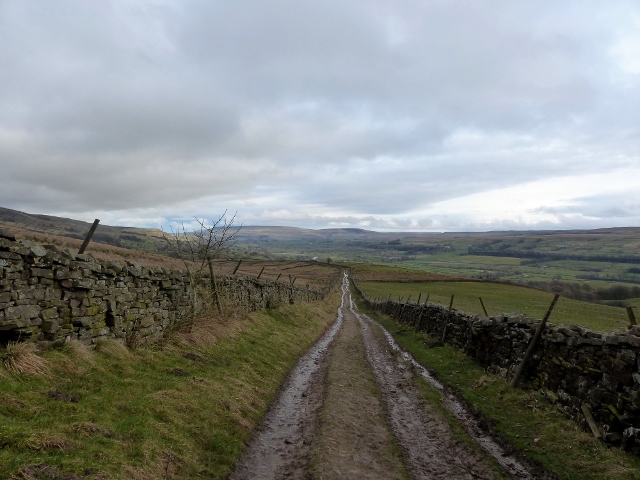 ….for great views over Wharfedale.

The sun actually made a brief appearance, casting a lovely light onto part of the hillside and Dave was so inspired that we all had to pose for a “Selfie”! 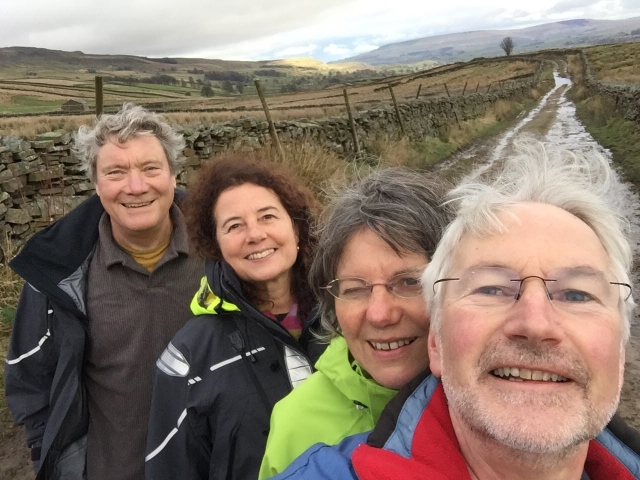 The following day we walked from our accommodation – “The George” in Thoralby…. 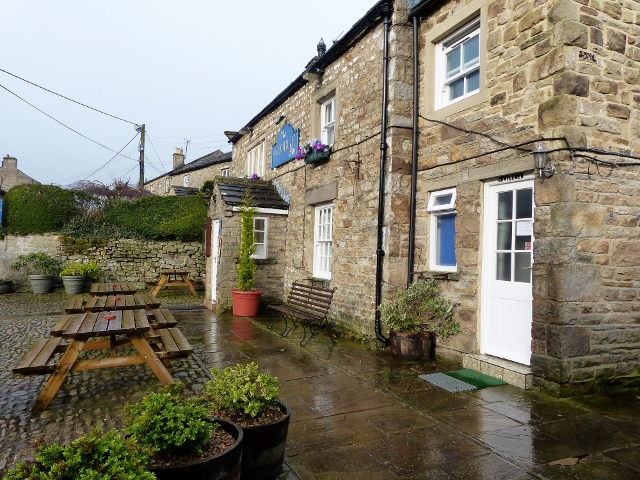 ….along to Aysgarth village where we visited an Edwardian rock garden…. 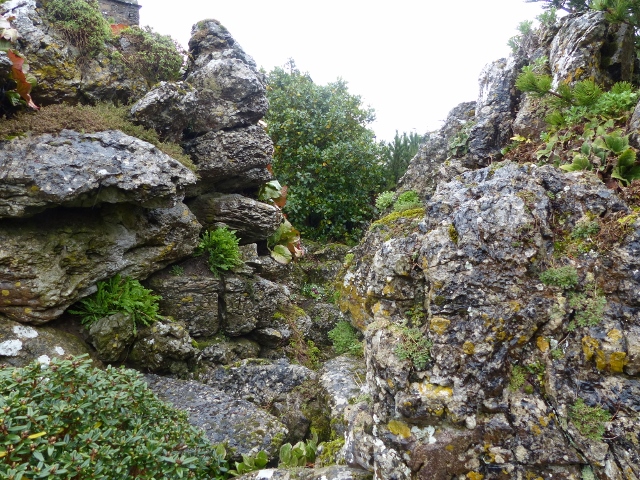 …..which Mag had read about in a local magazine.

It covers about 0.14 acres and was designed as a kind of walk through “alpine” grotto. A mountain stream and small cascade add to its atmosphere. I am sure that in sunshine the garden looks much better and at other times of year when full of colour it would be lovely. 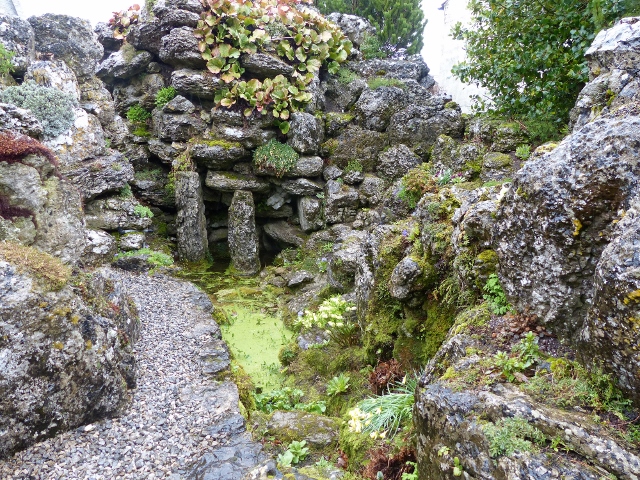 A pretty hellebore had made a brave start. 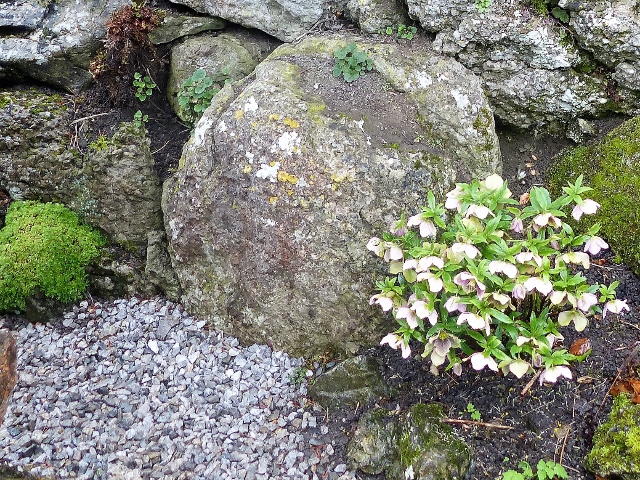 We then retraced our steps a little way and made the turn for Aysgarth Falls which were in full spate. 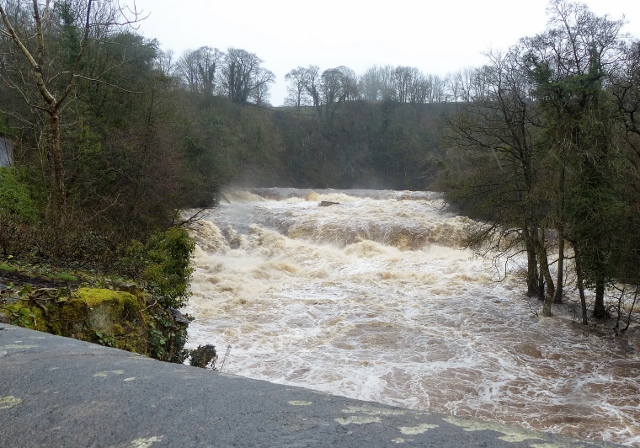 By this stage I was wet through – obviously being in Wensleydale I had mistaken myself for Wallace, or was it Grommit, who wore the wrong trousers! Anyway I wasn’t a happy camper and decided enough was enough with regard to walking that day. Being the gallant gentleman Mike decided to escort me. [The reality was that he rather fancied the dry clothes, hot coffee and Sunday paper experience that I said I was going to indulge in]. Being hardened troopers Dave and Mag decided to continue with the walk.

In typical “weather witch” fashion, when we got back to the pub half an hour later after walking into wind and driving rain all the way, the sun decided to make an appearance and by the time we picked Dave and Mag up in Bolton Castle we had blue sky. We tried to go to Hawes for a late lunch but had to turn back due to flooded roads and, after finding a suitable alternative watering hole in West Witton, we stopped off in West Bolton to look at the “Sorrelsykes Follies”.

It seems that the 1860’s construction the “Bishopsdale Rocket” is the most famous…. 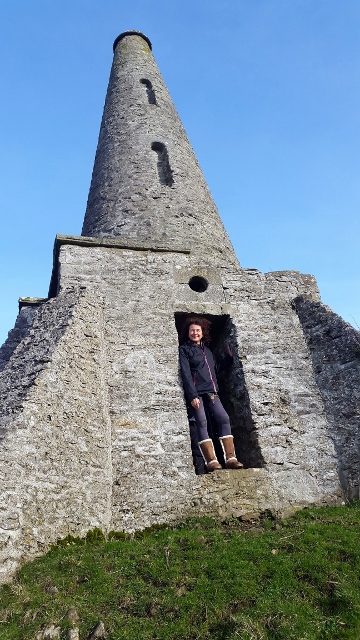 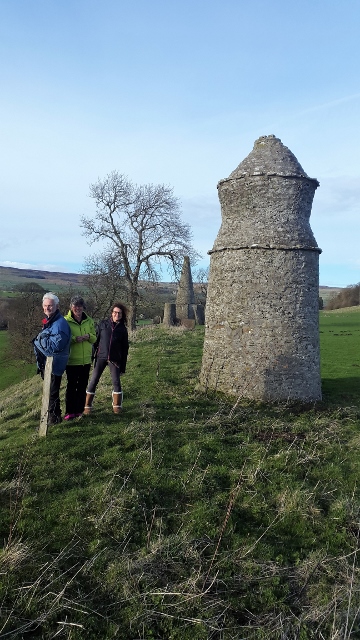 What I didn’t know until I was reading up about them later was that part of the farm we could see below us is also a kind of folly, having a C18 Palladian mansion frontage, and there is a sham ruin and some form of elaborate arched gateway which we didn’t see.

The blue sky didn’t last long and Monday was again overcast and drizzly. I had planned a triangular walk taking in Hubberholme, Bucken and Cray but as the route was described as being “very slippery when wet” and as part of it was alongside a beck which was, by now, more of a river we opted for a walk around Kettlewell. I had found an article which was a much abridged version of a book about the cottages and houses in the village – when they had been built, their various usage over the years etc. which gave us a better understanding of the history and culture of Kettlewell.

One building not mentioned in the guide was the parish church inside which we found what I think is quite an unusual stained glass window. 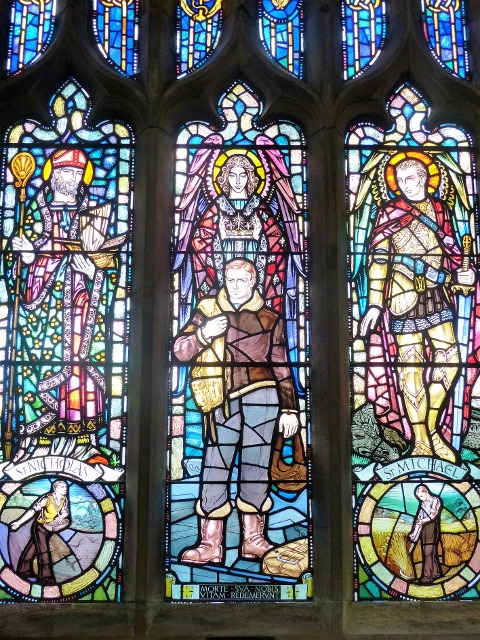 The centre window commemorates a local young man – a 20 year old Sub-Lieutenant of the Royal Naval Volunteer Reserve who, in 1942, went missing in active service on an operational flight from Malta.  His brother, a Royal Air Force Flight Lieutenant who survived the war but died aged 47, was also mentioned.

We were all agreed that as an example of a “whole village” it was really quite outstanding. There was no real evidence of new build or anything to mar its authenticity. I remember visiting some years ago when its annual scarecrow festival was taking place and thinking then what a great place it was so I am glad I have been back.

“The Falcon” in Arncliffe and “The Craven Arms” in Appletreewick formed part our route home. Both these pubs are well worth a visit and if any of you fancy a week long walking experience then “The Inn Way” may just be the thing for you. I have heard that the original Dales “Inn Way” book may be out of print but there is plenty of information on the web.

I am not sure what Dave and Margaret were expecting from their “Mystery Weekend”. I am pretty sure it wasn’t what they actually got! However, despite the weather it was a fun packed time, we visited places they hadn’t been before and we shared beer, food and laughter in equal amounts and, because of the weather, we saw some rivers and waterfalls at their best. 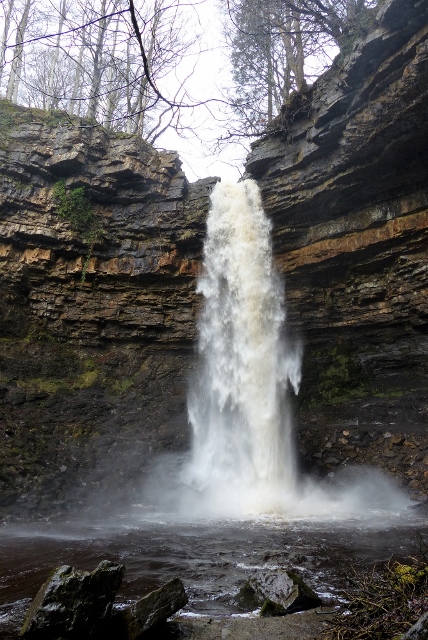 Permanent link to this article: https://www.sigasiga.co.uk/2017/04/07/a-mystery-weekend-with-dave-and-margaret/