Well, tomorrow [Wednesday 30 November] we leave Guaymas to return to the UK. It will be a strange feeling, marking the end of our adventures with “Siga Siga”.

In many ways I won’t miss Guaymas – it was not my favourite city in Mexico before everything went wrong and the past three months here has done little to make me want to return in a hurry.

Having said that, as you know, we have met some very nice people here. Roberto, our landlord, has been responsive every time we needed something and this little house was a real haven to escape to from the boatyard…. 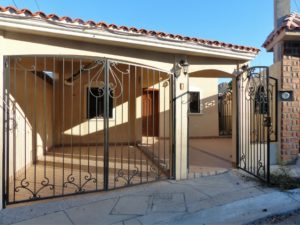 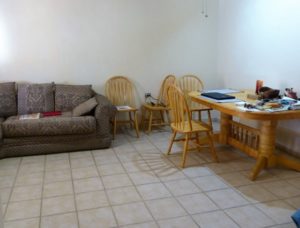 We even got a decent view…. 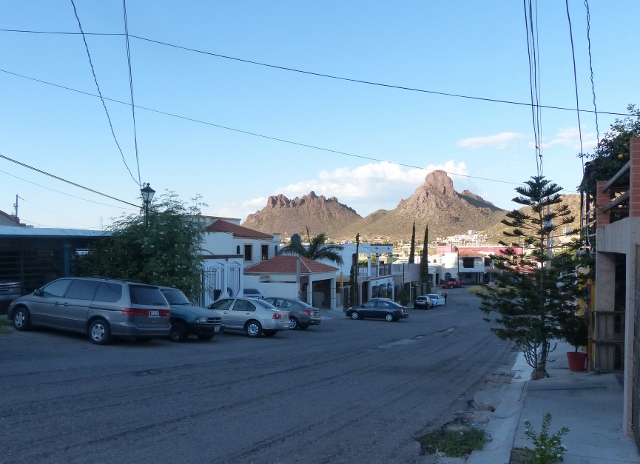 Avenida Bugambilias is in a nice part of town and very near to two of the three main supermarkets. There is a good coffee shop, an ice cream parlour and several decent restaurants within easy walking distance. One we visited amused us by its approach to mobile phone use…. 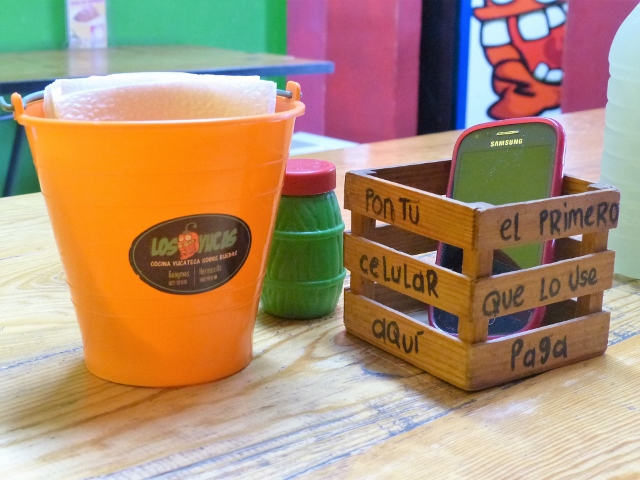 …. and, call me a dinosaur or a grumpy old woman, but I think it’s a shame more places don’t take this view.

There is also a Cinemex which sometimes shows films in English. We have seen “The Accountant” and later this afternoon are going to see “Never Look Back”. They may not be films we would have chosen in the UK but no television, no radio, no music or anything in the house means that we have worn out the set of dominoes we rescued! Also, at £1.60pp [$2.25] you can’t go wrong. 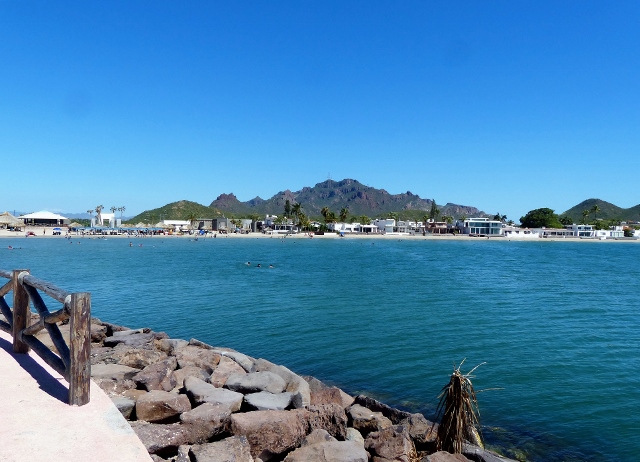 We had been told it was very popular with local people, which it was. It also attracted some other wildlife…. 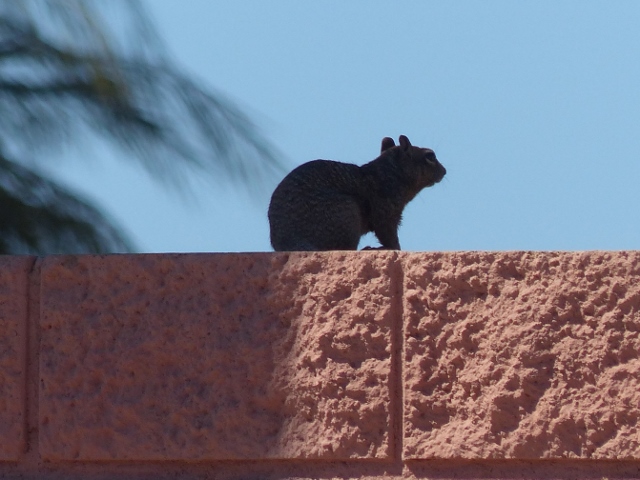 Unfortunately, our vision of a palapa restaurant selling seafood did not become reality. However, we had seen a restaurant earlier in the walk so returned there to find that they make a special Sunday paella …. 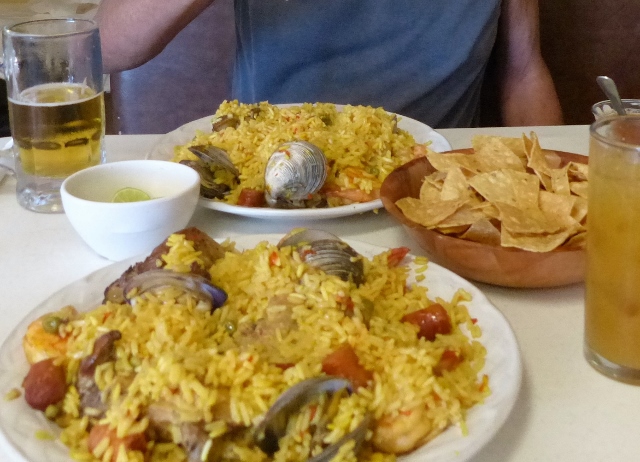 ….excellent, especially as we haven’t seen any other restaurant in Mexico make this Spanish classic.

Another walk we took was to what we thought was a small castle. We had seen it from the bus on our various journeys into town. This too was a bit of a disappointment as there was no castle – just a lookout point dedicated to “Adolpho Ruiz Cortines” …… 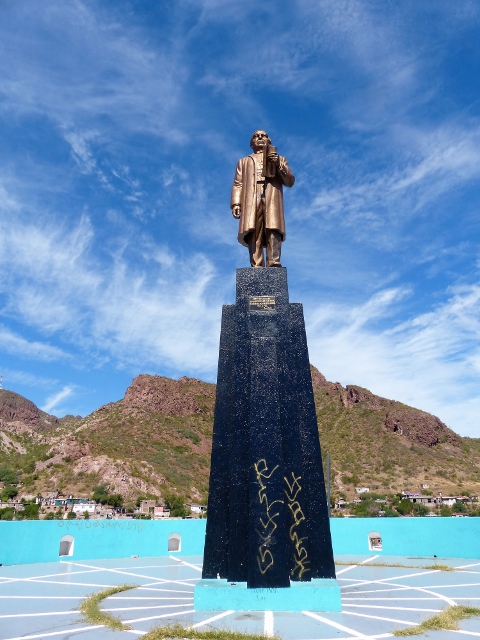 who, as far as we could make out, was a local guy who became president of Mexico in the 1950’s.

There was also a very good view of Guaymas… 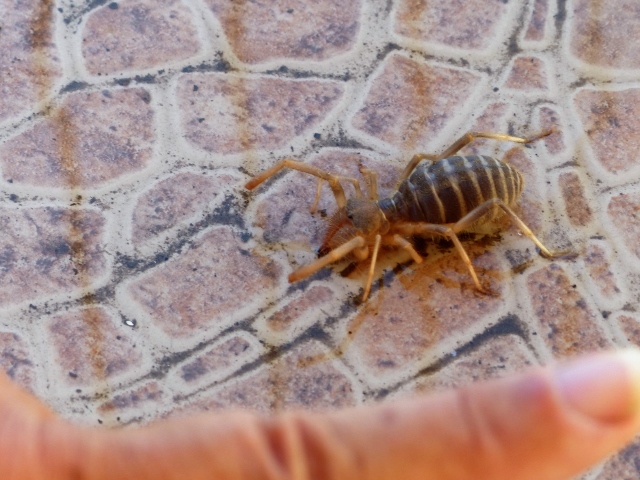 Whilst I was reasonably happy to put my finger fairly close to her to show perspective, there was no way I was going to do the same with this fellow…. 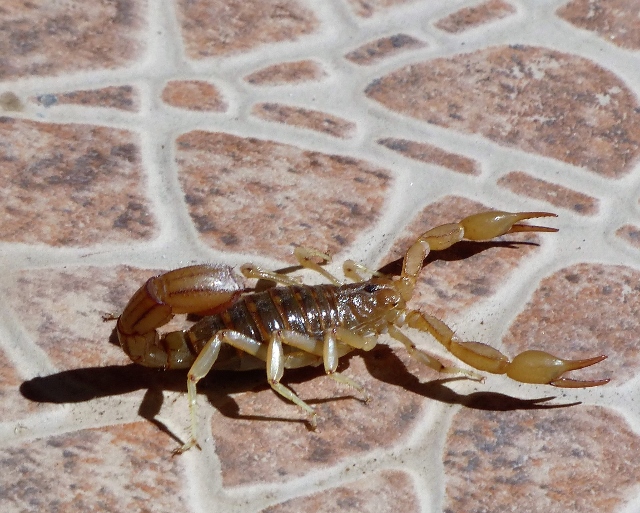 Last weekend we took a trip across to the Baja – to La Paz. We went to look at two boats which we had seen advertised. Whilst we are not intending to “panic buy” it did seem wrong to leave Mexico without at least looking at what is available. We saw four boats in total. We are still in the market! We have now learnt what “ready to go”, “well maintained” and “a great bluewater boat” can mean if written by a boat broker. Not surprising I suppose, but very annoying. Fortunately we hadn’t travelled overly far to see them but we certainly learned a thing or two.

We decided the first option seemed less complicated so, on the Tuesday, went to book our Thursday night tickets. We were told we couldn’t purchase until the day – so a bit of a wasted journey but at least we now knew where the ferry was – a bus ride from the centre of Guaymas rather than a walk – we know because we walked it!

So, armed with backpacks we turned up at 5pm on Thursday to be told the ferry wasn’t running because it was too rough out in the Sea of Cortez. Hmmm. We had arranged with the broker to meet him on the Saturday morning so, as there were no Guaymas/Santa Rosalia ferries until Saturday [and, who knows it might again be too rough] we ended up with option two. Now, you may be thinking why would we assume the Topolobampo to La Paz ferry would be running if the other wasn’t? It crosses the same Sea and is, in fact a longer crossing. Well, the Guaymas/Santa Rosalia ferry is a little rough around its edges and is quite small. The Topolobampo/La Paz ferry [and the one or two which cover the Mazatlan/La Paz route] are trusty European ferries. Ours was British – maybe you have crossed the channel on it! 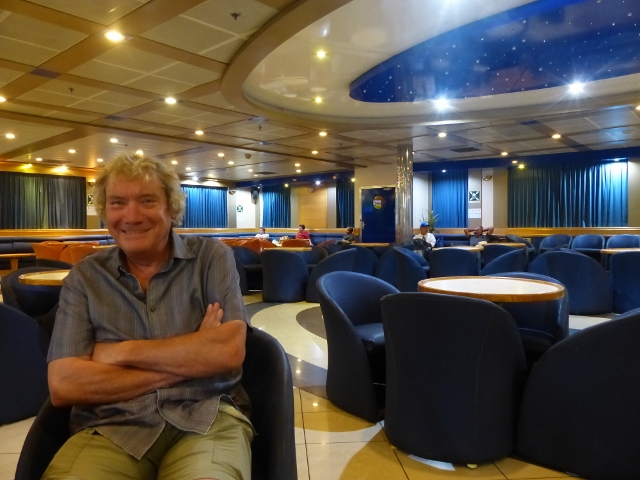 Actually, this route turned out to be an excellent way to undertake the journey and, as we found out, cheaper than the other option. The return ferry tickets were about £80 [$US120] per person which included an evening meal and, for the outbound journey which was overnight, we treated ourselves to a cabin at £30 [$US45]. All very civilised. I would recommend this route to any traveller thinking of crossing between the Mainland and Baja California. All, that is, except people with RV’s. There was a considerably disproportionate price for RVs.

We were quite surprised how many lines they used to dock the ferry because it is only in port for about six hours before it sets out again and in calm weather it almost seemed like a very big job for no real reason. There were two of these mooring platforms with four lines to each plus six more lines between the stern and the dock. But, they know what they are doing and take it all very seriously. 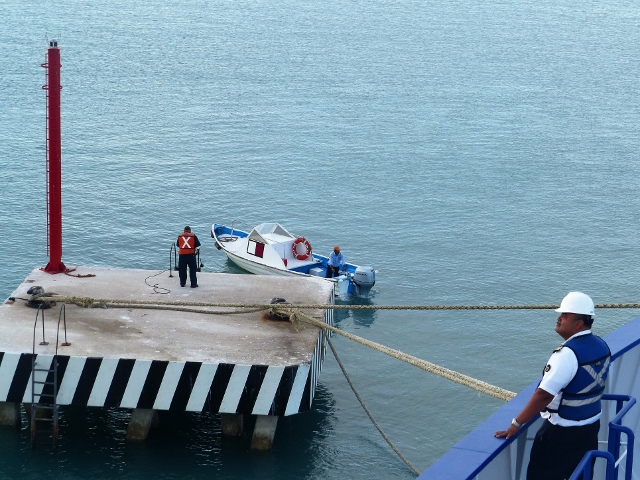 I didn’t take any photographs of the boats we aren’t going to buy – so I can’t bore you with them! But my trusty camera came in handy to capture the “Veteran’s Day Parade”. We missed the start because we didn’t know it was taking place but we did see the Police…. 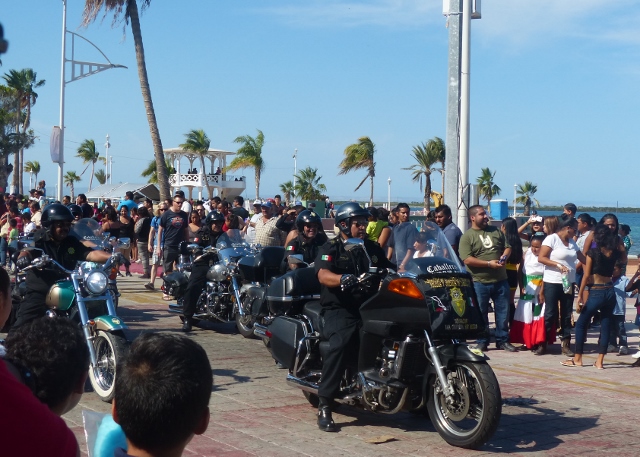 ….and some young cadets of some sort. 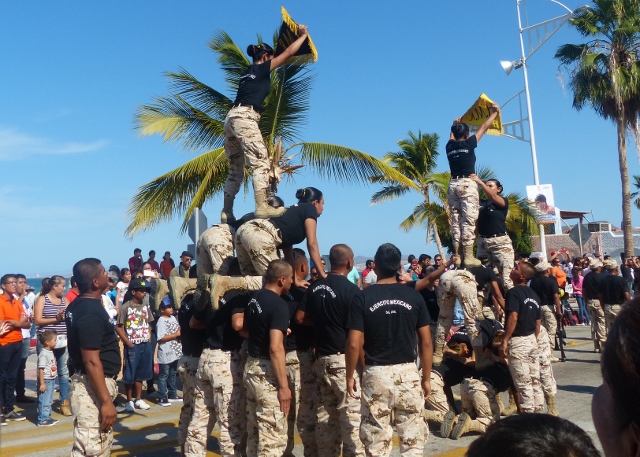 We spent a very pleasant afternoon strolling along the Malecon – walking further along it than we had when we were in La Paz earlier in the year with “Siga Siga”. It was quite good for shorebird spotting…… 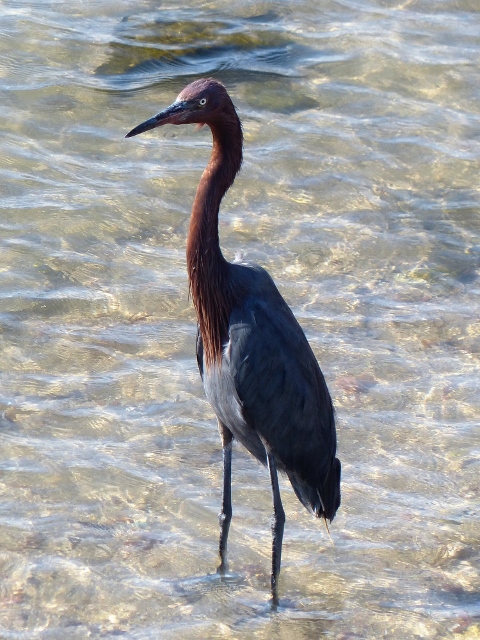 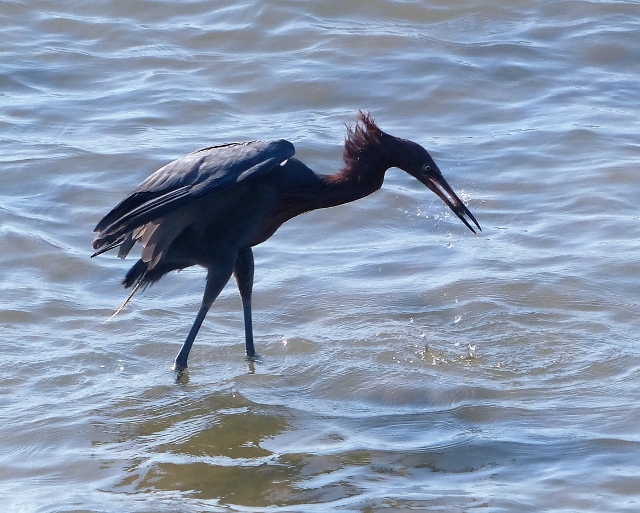 Bad hair day – but a worse day for the fish 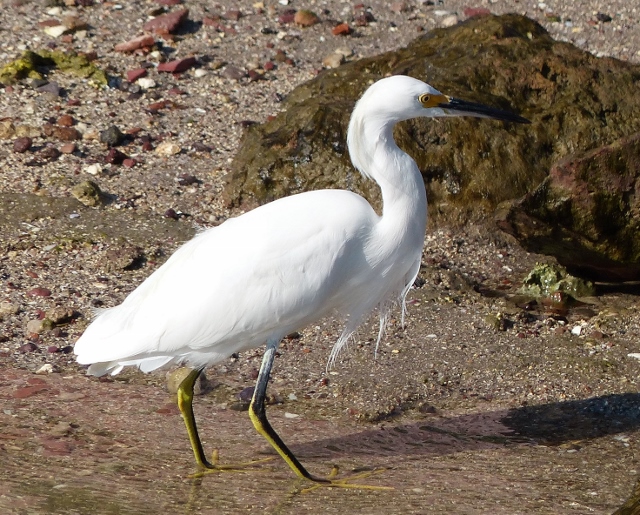 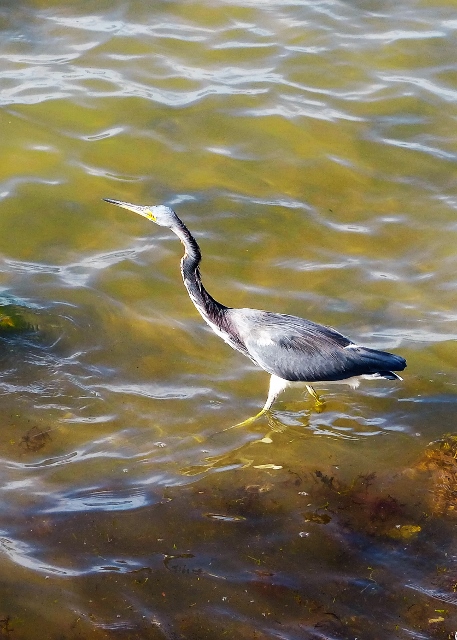 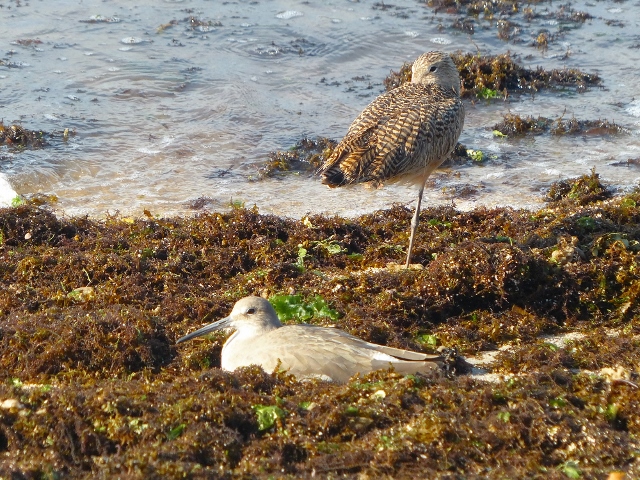 With regard to the “Sandpiper” – those who know their birds will know that Sandpiper is a collective term for a whole group of wading birds. I tried to work out the sub classification but went bleary eyed after a while. I came to the conclusion it wasn’t a Greater, or Lesser, Yellowlegs – that’s fairly obvious! However, whether it’s a Marbled Godwit or a Willet or something else completely I am not sure. I don’t even know whether the bird in the foreground is the same family as the one standing up. If they are Willets then it might make some sense as they have a breeding plumage [tawny] and a winter plumage [grey]. So if anyone wants to do the bleary eye thing and try to find out what I did take a photograph of then please go ahead – and let me know!

Our highlight of the weekend was definitely “Sorstis” restaurant. The ambience, the staff, the food, the wine – all of a very high standard [if ambience can have a standard?]. I mentioned above that we had enjoyed paella, well – on this occasion we had Serrano Ham as our starter, served off the bone at the table. 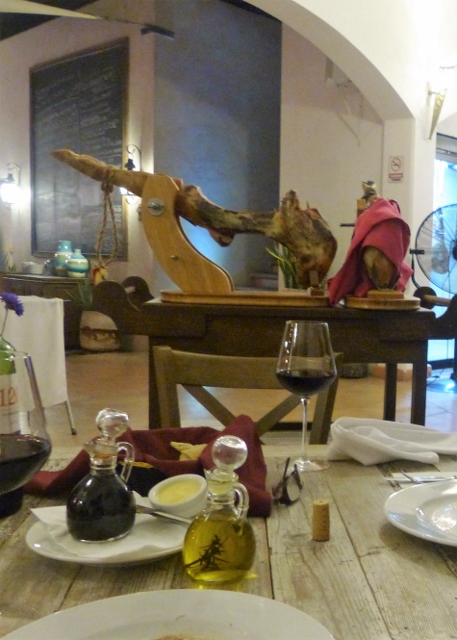 It was perfect. They have built a small room where they store their hams and cheeses to keep them at the correct temperature. We had a lovely chat with the Italian waiter who works in La Paz during the European winter and in Spain [for the same owner] in summer.

We should probably have asked where in Spain because it appears that that is our next port of call….. Well, almost. We fly in to Gatwick on Saturday and on Monday fly from Stansted to Barcelona. Yes, boat hunting again – though there is also one we have our eye on in Scotland. We have Ryanair to thank for very economical flights at this time of year and, even more importantly, our wonderful friends Christine and Jack who are letting us stay in their apartment. The only downside is that they won’t be there.

So, who knows? What we believe is that when the right boat comes along we will know her. It’s goodbye to Mexico for now but we believe we will be back. In the meantime I will try to remember our times in Mexico not for our loss of Siga Siga but for the pleasure of sailing its Pacific coast and the Sea of Cortez, for the wonderful cities and the amazing culture and scenery and the fabulous people and friends we have met and shared good times with along its shores. 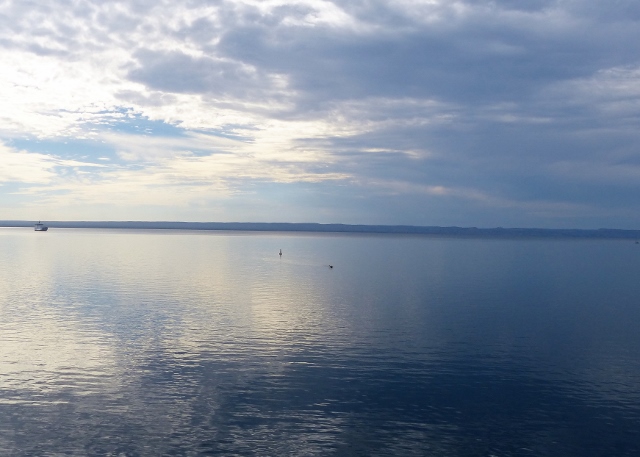