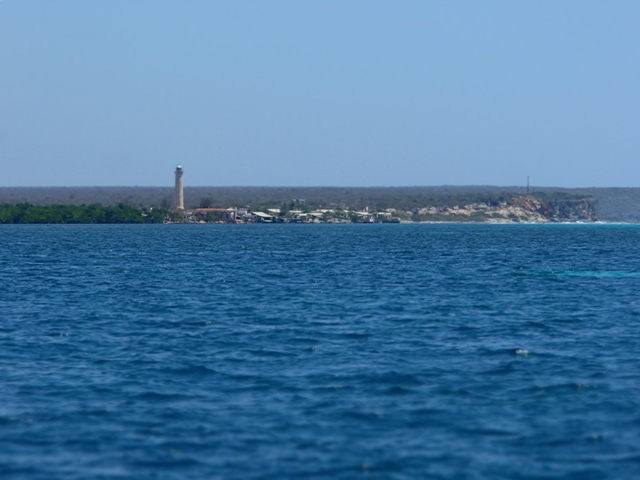 As planned and reported at the end of the last blog post, we left Jamaica at 4pm on 18th March to sail to Cuba. Having motored up the channel and out to sea we unfurled both main and genoa and didn’t need the engine again until 45 minutes from our destination when we turned into wind through the buoyed channel off Cabo Cruz at around 8am the following morning.

That makes the 87 mile journey sound like very plain sailing which, in essence, it was but to make us get up off our bottoms there was a period of 20 plus knot winds and big waves which resulted in both the sails being reefed. This was followed, in the middle of the night, with winds of just 11 knots when we slowed and rolled a bit. So, not the most comfortable of passages – but relatively uneventful.

Having anchored in just less than 4 metres of water we had a quick cup of coffee and decided to try to get a couple of hours sleep but about 30 minutes later we heard…..”Hola, Capitán…Hola”…. and our first fisherman of the day arrived having snorkelled out from the shore, picking up an assortment of goodies on route. 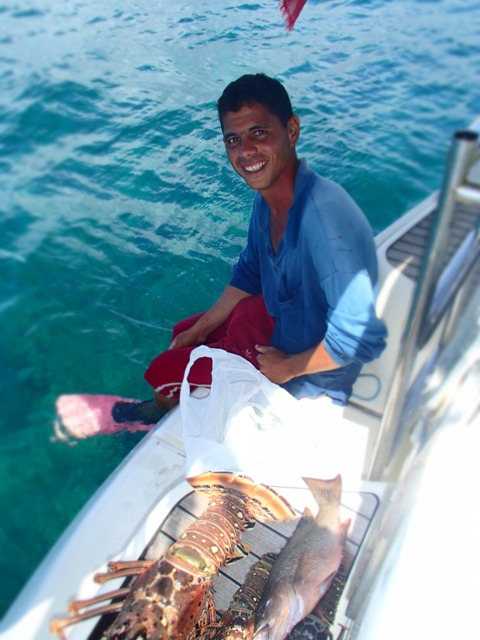 His name was Jorjio and Mike spent a happy two and a half hours talking to him and offering him various items as “swaps” for lobster and fish. 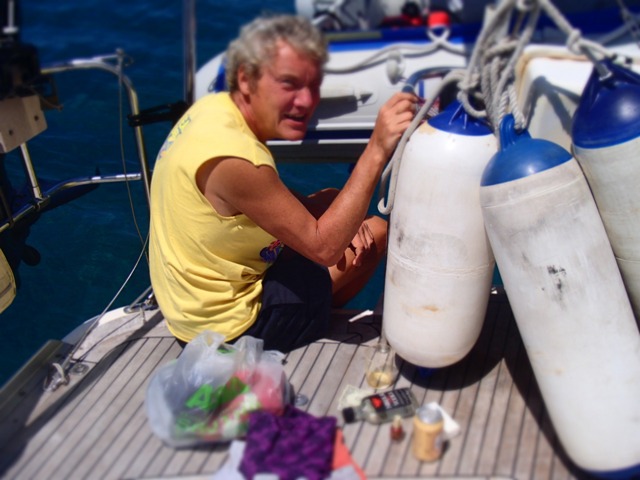 In the end we got one huge lobster, two small lobsters and a decent sized fish [called a Cerbo] in exchange for a couple of t-shirts which I no longer wear and a quarter bottle of vodka. Mike and Jorjio also shared a few nips of rum but Mike thought this was more than a fair exchange for what was an excellent Spanish lesson! We were told that his wife was in the hospital having just given birth to their second son and he had to have a name in mind when he went to see her later. He wanted to know what we would choose. We went initially for Christophe but because his first son is called Christian we had to think again. We agreed on David – which in Spanish is pronounced “Dabeed”.

About 3 hours later the next fishermen arrived. First of all there were two in a boat and then a third one swam up towing several pounds of fish and dropped them off with the guys in the boat. We had to disappoint them as we didn’t purchase anything but they were quite happy to have a bit of a chat and have their photograph taken. 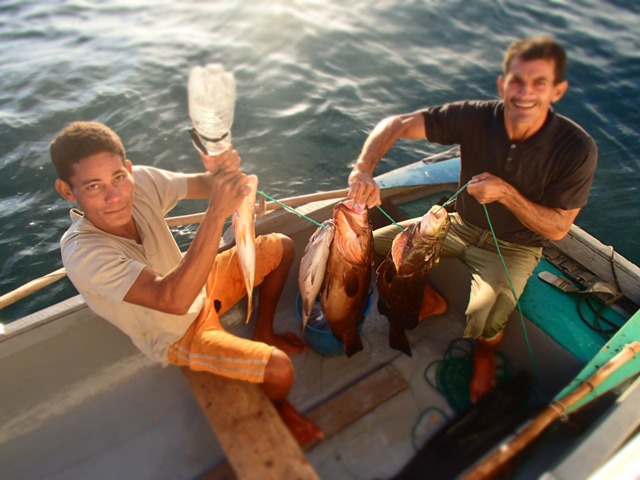 We stayed just one night at Cabo Cruz as we had been advised that there is a Guardia station there and that although the Cuban authorities don’t mind visiting boats anchoring, the expectation is that if not cleared in the anchorage is only temporary and that cruisers should make their way East to Santiago de Cuba or North West to either Trinidad [the Cuban town version – not the island!] or Cienfuegos so that Clearance can be undertaken.

So, on 20th March we set off on our 250 mile journey through the Archipiélago de los Jardines de la Reina. There must be hundreds, if not thousands, of Cays – some submerged at high water, some just a clump of mangroves a few metres across and some larger ones with small beaches as well as mangroves. None of them are inhabited – except by a variety of birds – and all of them are surrounded by shoals and reefs which make the passages interesting and often zig-zagged.

Our first anchorage was Cayo Media Luna approximately 50 miles from Cabo Cruz. The wind was extremely light for this journey [4-8 knots] so it was engine all the way – but it did mean that we made 80 litres of water! On arrival in Cabo Cruz we had noticed a couple of small rips in the mainsail which needed fixing and the Media Luna anchorage was so calm that Mike took the opportunity to scale the mast, patches in hand, to mend them. A refreshing swim, an early evening meal and a rum and coke sitting on the bow listening to the croaking frogs made for an extremely relaxing evening, followed by a good sleep which set us up for the next day’s journey.

We awoke to a lovely dawn…. 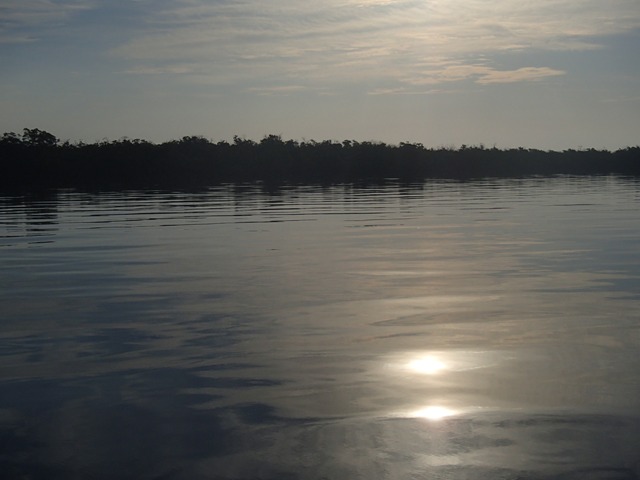 and another calm day [tricky to spot where sea becomes sky]….. 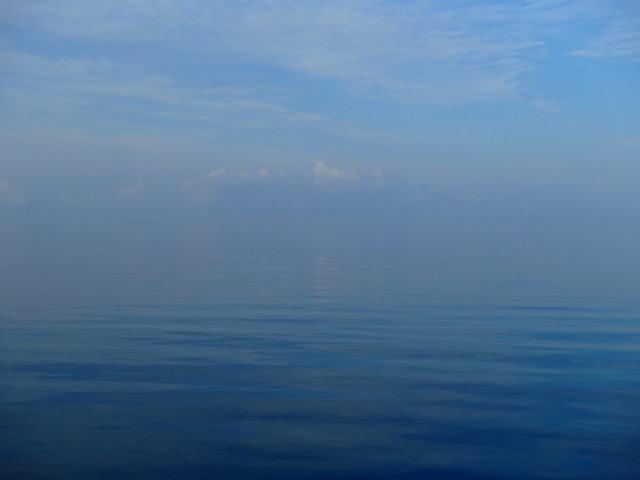 so it was motoring again – but this time only 25 miles to Cayo Grande. Well, according to the chart its Cayo Grande though the cruising guide calls it Cayo Grenade? Whatever its name – it had an excellent wreck in the middle of it. 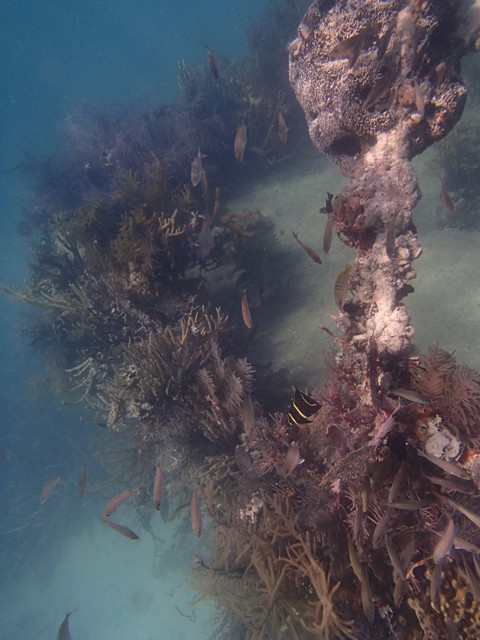 We saw a pod of dolphins on the way and then had a brilliant hour of snorkelling. 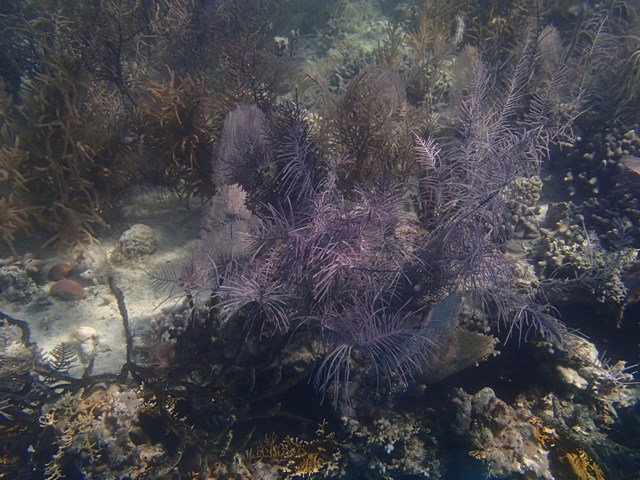 On 22nd March we made the 36 mile passage to Cayo Chocolate – a brilliant journey because we were able to get the asymmetric sail out for the first time in ages. Being rather out of practice it took us 40 minutes to put it up and 20 minutes to take it down again, so not exactly racing style! But it saved fuel and in 7-12 knot winds it was perfect.

“Perfect” is also how I would describe Cayo Chocolate and we were more than happy to take a day off for a little exploration by dinghy. We meandered through mangroves…. 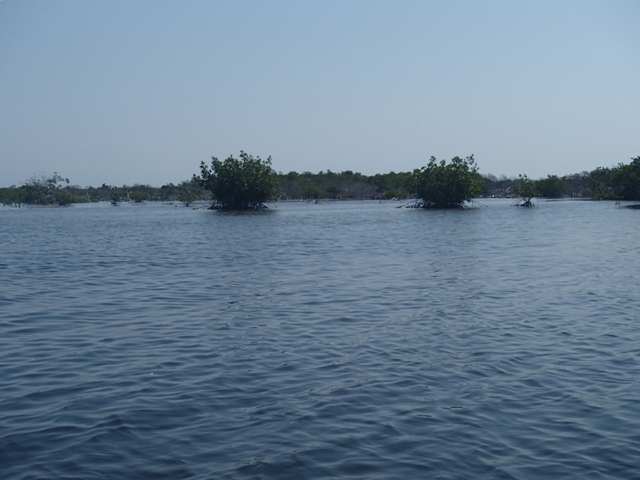 did a spot of beachcombing…. 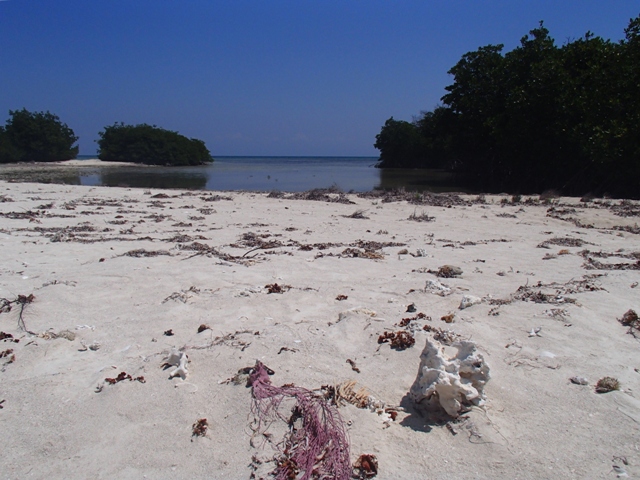 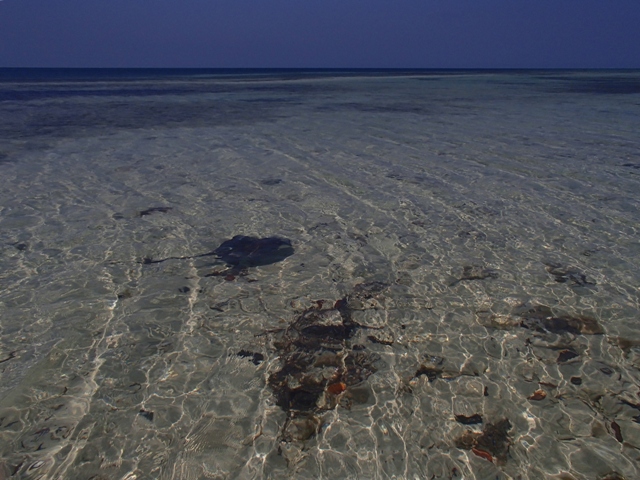 marvelled at the many starfish… 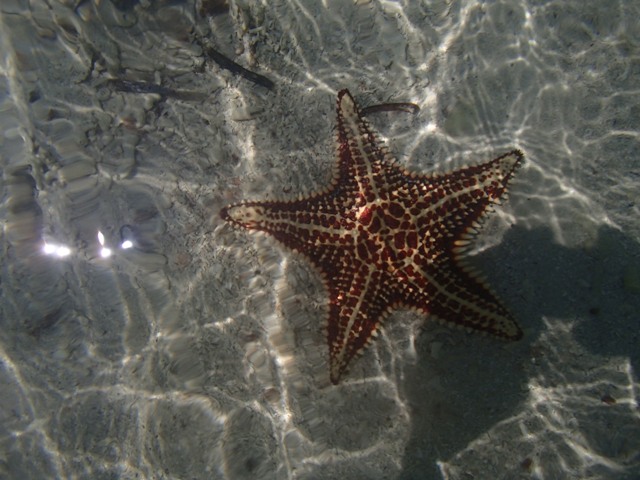 and enjoyed skinny-dipping in our own infinity pool! 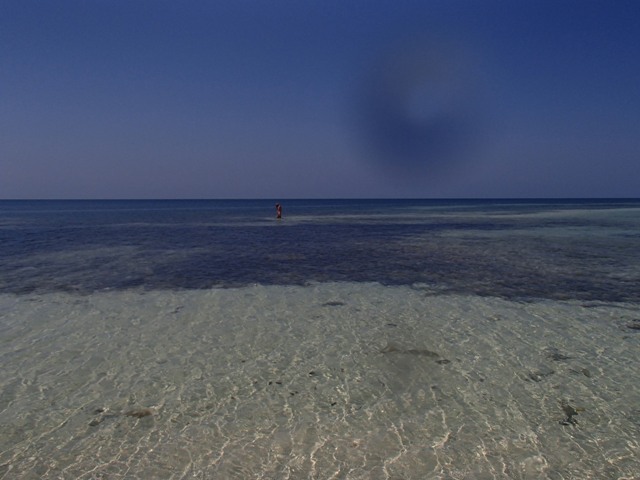 You might remember that we are sharing this part of our trip with our French Canadian friends on “Don Quillechotte” and on a couple of evenings we have got together for drinks, chat and the occasional game of Mexican Train. Whilst at Cayo Chocolate we tried to speak to our friends in Ardrossan by SSB [as Don Q has the kit]. The emails worked but unfortunately we weren’t able to get to speak to Malcolm. Sorry Malc [and Steve and Gill if you were there too]. We haven’t been put off though and are still planning to set ourselves up with SSB during our next layover for hurricane season.

So, onwards again to Cayo Cuervo. We started sailing with the genoa and then it was asymmetric time once more – with the unfurling and furling times much improved at about 10 minutes each! Unfortunately Cayo Cuervo didn’t live up to the image we had of it having read the cruising guide. There was a beach but it was very small and uninspiring. The water over the shoal was clear but it was a sandy bottom rather than reef so, although we did a bit of snorkelling there wasn’t much to see. We were, however, quite fascinated by the fishing boats based there…. 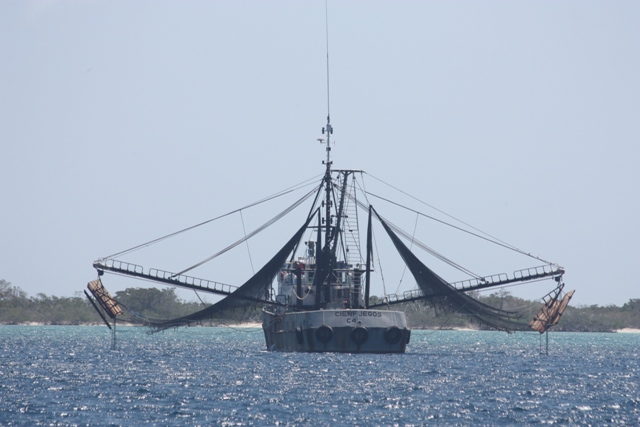 with their interesting net arrangement. 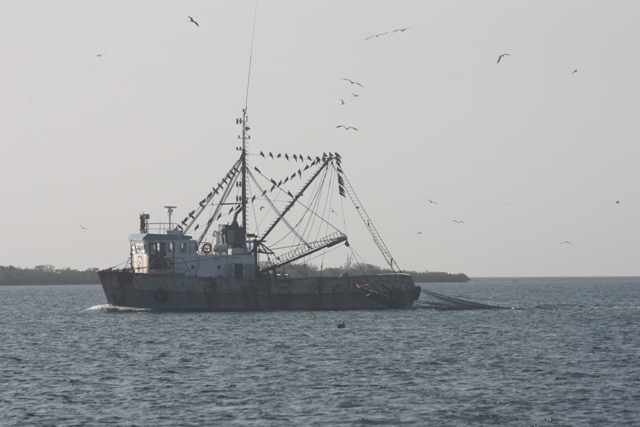 Not all the fishing boats are the same, there are some concrete boats which seem to operate with smaller boats towed along behind which in turn tow even smaller boats. 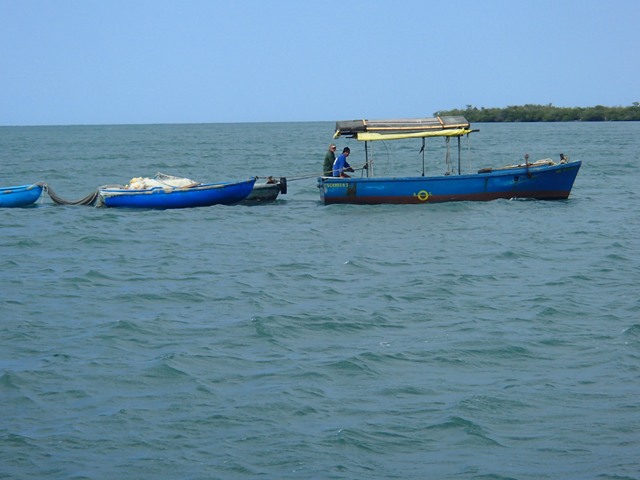 The photo doesn’t show the largest boat which pulls all of these as they had “uncoupled” to come alongside. We think that they use the different types of boat to get into the mangroves and to fish or catch lobster on the reefs and in the shallows and then put the catch into ice in the larger boats? We know there is ice because we were offered some when, in Jobabo – our last stop before Cienfuegos – we were sold three magnificent fish for the equivalent of about £6.00. 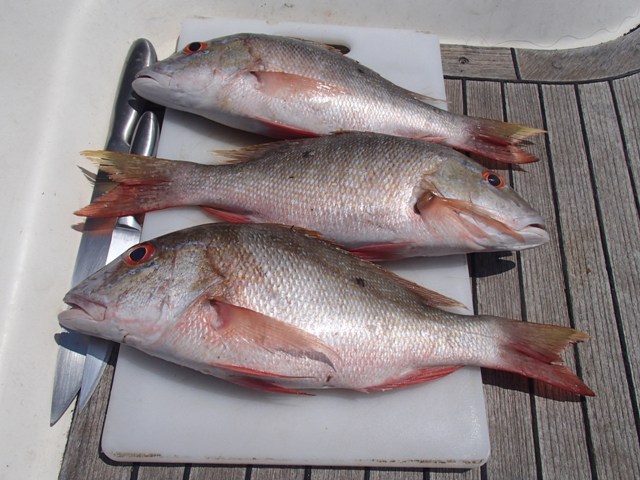 A small cold front with gusts of 35 knots, heavy seas and a fairly chilly wind [sweatshirts out] meant that we hunkered down in Ensenada Jobabo for a second night. It was Don Q’s decision as they have their two daughters to consider – but we think it was the right one for us too. So, finally, on 28th March we made our way to Cienfuegos. We had really high hopes for an excellent day sail when we were zooming along at 8knots [yes, that’s zooming] but after about two hours it was back to water-making as the wind dropped from 16 knots to 4 knots and changed direction from NE to SW. Strange stuff this weather!

Cienfuegos, the town, is on the north-east corner of the large Bahia de Cienfuegos which is approached through a narrow inlet and therefore extremely sheltered. The 5 mile buoyed channel from the entrance to the town [and the Marina] is clearly marked and must be adhered to. Just as we were arriving at the seaward end of the channel Don Q [who were sailing behind us] came over the radio to tell us that on their AIS they had seen a 550 tonne boat about to enter the channel from the other end. We decided to wait  and were really glad we did. It could have been a bit messy had we gone into the channel and turned one of the bends and come bow to bow with the massive tanker which was, according to Don Q’s AIS doing 10 knots. Passing it would have been scary. Turning around in the narrowest part of the channel [had we encountered it there] very scary. Being chased by something weighing 550 tonnes doing 10 knots when our top speed is about 8 knots very, very scary. So, I think AIS is now at the top of Mike’s wish list – well, after the SSB that is.

Parts of the Cienfuegos bay are off-limits to cruisers and we have heard that some people have been fined for going into the restricted areas. As we understand it, on the mainland the only way to access land is via a marina so there are only a few places in Cuba where anyone can get off their boat. That doesn’t mean that travel isn’t possible – it just means that the starting points are limited as it is not possible to just anchor anywhere and go ashore. As reported above, in the Cays we have left the boat but only to swim, visit Don Q or land on a small beach on a small Cay 30 miles offshore. It seems that this is OK – probably because there isn’t really anyone to see you. Other than the fishermen and Don Q we have seen only 3 other cruising boats in the 10 days since leaving Jamaica – so it is not exactly crowded.

Thus, our introduction to Cuba has been fantastic. Sailing through the Cays has been a wonderful experience, the fishermen very friendly – so we can only assume that most, if not all, Cuban people will be similarly welcoming and we can’t wait to set foot on land. We are planning to see some inland Cuba using public transport so, if it all works out you can look forward to the next thrilling installment which, if plans work out, will cover Trinidad, Santa Clara and Havana as well as tell you a little bit more about Cienfuegos.