The Rest of Martinique

Having promised you Carnival I am afraid you are now going to have to put up with quite a few photographs as words can’t really describe the colour and spectacle. 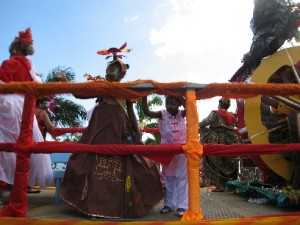 We had been advised that the main event of carnival was over a three day period, though we understand that here in Martinique, as in other places, there are events such as band competitions and “best village” etc which occur over the week leading up to it. Although we missed the lead in we were really pleased to have been able to arrive on the Monday, especially once we realised that on Lundi Gras some restaurants lay on a special evening, which we were fortunate enough to come across quite by accident.

Having anchored in Fort de France Bay we set out to find clearance but were advised by a young policeman that everything was closed [4pm] and to try on the Tuesday [though quite why he said that when everything was actually closed until the Thursday we aren’t sure?].

So we decided to wander round the town as there seemed to be a couple of floats and a number of painted cars touring the streets in a rather haphazard manner. We are still not sure quite what was happening that evening in relation to any kind of parade or even if what we saw was supposed to be one or that the idea is that folk just mingle as they see fit. The local guide book states that Lundi Gras is supposed to be a burlesque wedding but we only saw one “traditional group” who looked as if they were depicting a wedding. In relation to burlesque – well that seemed to feature throughout the three days. 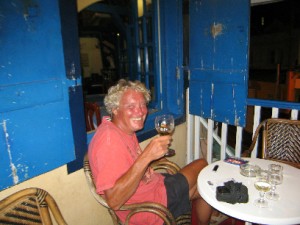 At around 6.00pm, at the end of the promenade area we saw “La Croisiere”, a bar with a balcony, which seemed like a good place to sit and watch whatever it was that was happening. We left at 2.00am Tuesday! It was fantastic. 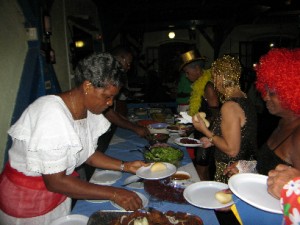 There was an open bar [from 8.30pm], a cold buffet followed by a hot buffet and a great band. We joined in the dancing and everyone was really friendly. Some people were dressed up in smart clothes and some were in fancy dress but it didn’t seem to matter that we were in t-shirts – nobody cared. Everyone was just out to have a good time and enjoy the food, music and dancing. A great atmosphere. 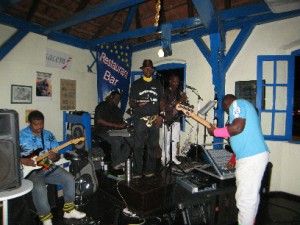 For both Mardi Gras and Mercredi des Cendres [Ash Wednesday] we have now learnt that although there is a procession, it actually tours round about three times and some of it more than that as the bands seem to take over, and the whole thing appears to space itself out in a way which suits the various bands rather than the organisers. Thus, arriving at 3pm for a “prompt” start was probably not the wisest move. Getting there at 5pm would be just as good as the parade does go on until about 7pm but the light fades around 6.00ish so for better photos [at least the way I take them] daylight is probably better. 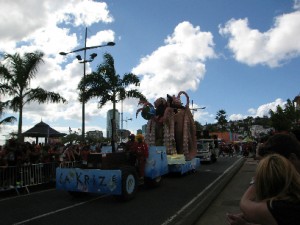 There is a carnival “king” named Vaval. “He” is Vaval whatever is being depicted be it male or female, politician, celebrity or institution. Vaval this year was the financial crisis and, within that theme, Sarcosy seemed to be a central character – or at least his various sexual proclivities. 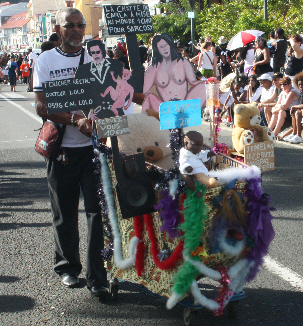 On Mardi Gras the parade is “red devils”, when everyone wears a combination of red, white and black – and I mean everyone. It isn’t just the procession which parades it is the whole island – or at least all of the islanders [and tourists] who come to Fort de France on the day. 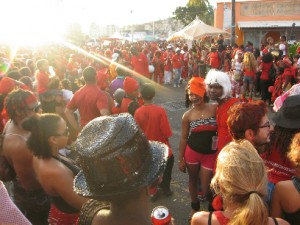 I really wish I hadn’t disposed of my dressing up box! 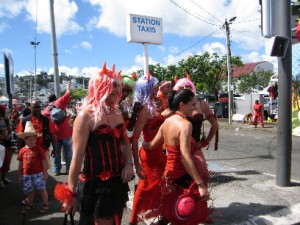 Whilst we were waiting for things to get going on the Tuesday we came across a troupe of dancers. They must have danced for about an hour, in fairly heavy clothes in approx 30 degrees [90F]. Phew. 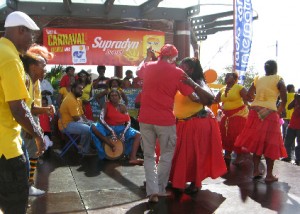 The cars we had seen the previous evening were now out in force with their occupants all dressed for the occasion….. 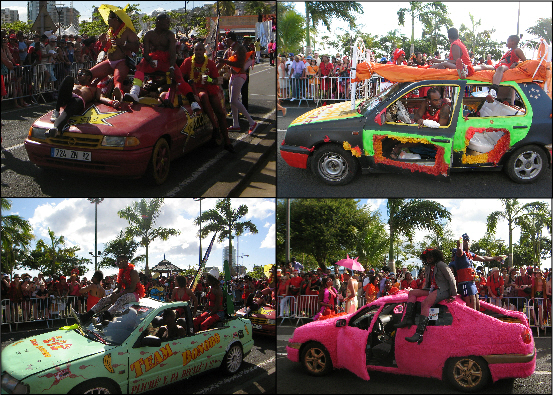 And there were some great marching bands…… 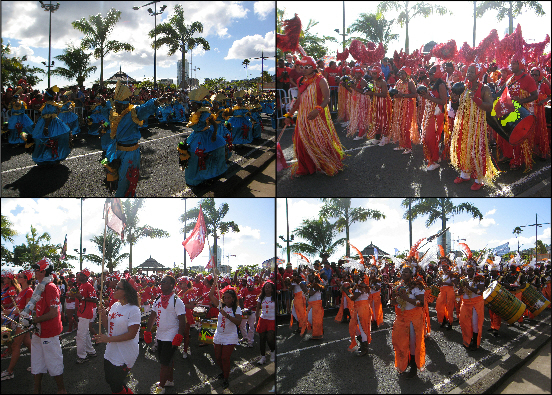 Not to mention individuals……. 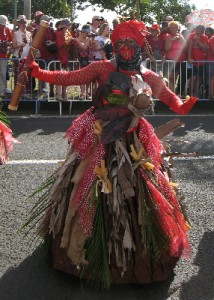 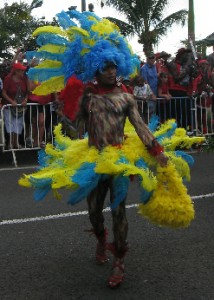 Mercredi des Cendres brings she devils who are described as “rambunctious mourners in black and white outfits”. 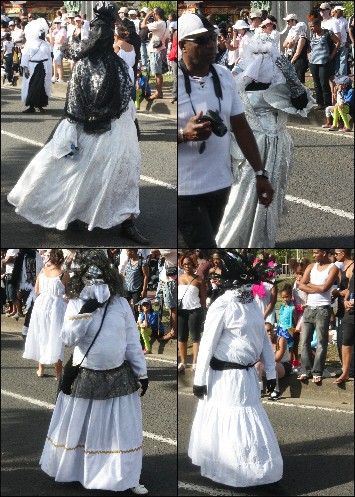 So, once again it is a sea of black and white as the procession, bands, locals and tourists all turn up again in a different outfit….. 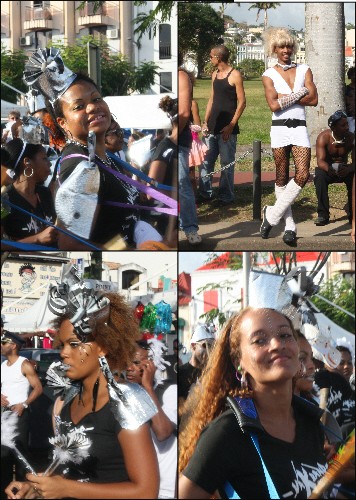 Well, all in black and white except those who wear pink! 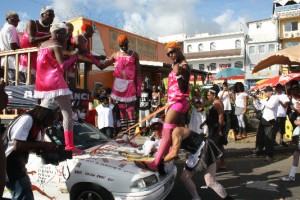 All of the bands and their followers seemed to be playing a particular tune with chanting about Vaval and as the evening drew closer the bands got louder and the chanting faster. All this was leading up to the ceremonial burning of Vaval – which we saw from the comfort of the boat and which, rather peculiarly seemed to occur almost simultaneously in two places. We are not sure what was burned at the eastern end of the promenade but from the remains we saw on Thursday Vaval was definitely incinerated at the western end.

We decided not to stay ashore for this partly because we weren’t sure at what time it would happen and partly because a couple of the bands seemed to be getting rather worked up. We saw a member of one band hit a member of a “rival” band over the head with his drum and a small fracas ensued. To be fair though – this was the only slight hint of any trouble over the whole three days. There was no police presence except at strategic points of entry into the town where a perfunctory search was made of bags. We know this because on the Monday when we had been looking for clearance our rucksack was opened. Other than that there were just a few carnival organisers with “security” written on the back of their shirts.

And, on all three evenings, after about 8pm there was hardly anyone left in the town. A couple of bars stayed open and there was music but it was very low key and did not disturb us at all.

And so, that was carnival. Clearly nothing like the scale of Rio – but it was great to have finally seen one. Some of the other islands have a carnival in July or August called “Cropover” which marks the small festivals that slaves were allowed to have once a year after the sugar cane had been cleared. We think that St. Vincent may be one of these and, as we are planning to be around St. Vincent at the beginning of July, we may be lucky again.