The 28th September started with lots of cleaning, both inside and outside of the boat, during which time I managed to slip on the wet transom and ended up in the marina between boat and pontoon. Fortunately it was mainly my pride which was dented – my left leg and toe, although initially lumpy and bruised, are now fine. We now understand why people put towels and mats onto the lowest transom step when berthed stern to – and have followed suit. 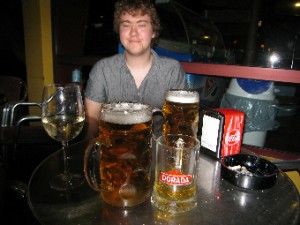 The much better event of that day was James’s arrival mid afternoon. Although he didn’t quite rival the epic journey made by Chris and John it did involve a 3.30am start, a train, a plane, a bus and a ferry – and all accomplished without delay or mishap. His arrival had to be celebrated with a few beers to assist with all the catching up which needed to be done and James also discovered that asking for a large beer in some bars means a massive beer in reality – what the Portuguese seem to call a “Giraffe” but which we hadn’t before seen in Spain. Well done James – a first [and also a last as neither of them went back for a second one!] 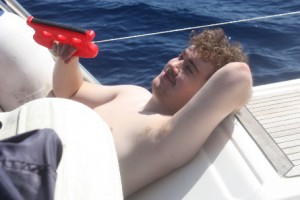 We all agreed that James should experience as much of the island as possible and this was first achieved by sailing/ motoring during the next three days from San Sebastian to Santiago, Santiago to Valle Gran Rey and Valle Gran Rey back to San Sebastian. In total this was only approx 33 miles and, with winds generally less than 9 knots was neither scary nor particularly exhilarating. James did manage to keep himself amused though with some fishing.

Not exactly “Extreme fishing” – more “Laid back fishing” – but, unfortunately, also unsuccessful fishing. Dave – you are still the only one to land a catch.

Santiago is the village on La Gomera where Mike and I spent a pleasant week’s holiday about four years ago and was when we decided that we wanted to start our journey across to the Caribbean from La Gomera. The village is nothing particularly special, about four bars, four or five restaurants, something which is loosely described as a beach [very sloping and black sand] and a small harbour. But it was a great holiday and it was good to share the place with James, especially the atmosphere of the square and the small Pizza restaurant. 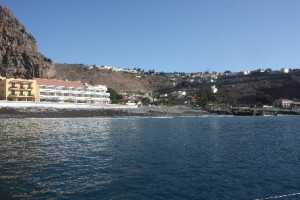 The anchorage was also rather interesting – trying to find a spot far enough from the beach not to hit the rocks, but not in the way of the fast inter-village island ferry which seemed to take great delight in coming closer to us each time it entered the bay. 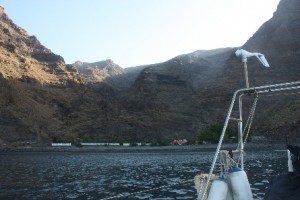 The anchorage at Valle Gran Rey was a very different affair. It was fairly sheltered and there was plenty of room and it has spectacular cliffs. The downside was that it was a 5 minute “pig ride” from the harbour itself. Now, avid readers will know what this means – especially since it was an offshore wind. Despite sharing the stories with James and laughing at our previous escapades, both James and Mike dressed in smart shirts and shorts for the journey. Me – I wore a bikini and changed when we arrived – good plan.

Valle Gran Rey is described in the guide books as a small resort favoured mainly by Germans and with a slightly bohemian atmosphere. Not quite sure I understand the latter unless it was attributed to the line of folk who sat on the seawall waiting for what turned out to be a fairly nondescript sunset.  Maybe it was just us who were unlucky.  However, what we did find in the harbour area was probably some of the best Tapas La Gomera has to offer. The possibility of this had been in the back of my mind as my memory of the harbour included a fisherman’s bar – which was exactly what we found.

On our arrival back in San Sebastian on the Saturday afternoon we saw that there was slightly more activity than usual around the town square [not difficult for San Sebastian – maybe a dozen or so people instead of three or four!] and a guy who seemed to be setting up a sound system. Although this was only a small system in comparison to some of the others described in earlier entries it held a certain promise and what transpired was a kind of Salsa band who begun playing at around 11pm and to whom Mike and I danced away until around 2.15am. I do feel a need to report that the golden oldies won the day [or night] as James retired at 1am – though to be fair the music was rather less to his taste than ours. 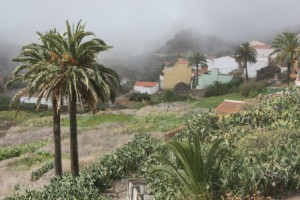 Sunday 2nd October – and it was Car Hire for the day to tour the island – well all of it except Santiago and Valle Gran Rey as there was no point in repeating what we had already seen. People we have spoken to following our earlier trip to the island may recall our description of it. It is a small dome shaped island about 20 miles across at any point with the central “Alto de Garajonay” peaking at around 1500 metres. You might, therefore, be able to imagine that most of the roads twist and turn their way up and down from coast to summit – great for the nervous driver. The centre of the island is a National Park which is described, by UNESCO, as “an ecological treasure of biodiversity, much acclaimed for a particular kind of lichen which hangs from the trees and which results from the top of the island being swathed in cloud for much of the time. When Mike and I visited previously we tried several times to see the views from the top – but failed on every occasion because, above about 1,000metres there was always cloud. Our trip with James proved almost similar except for a few glimpses now and then of the peaks above the forest.

However, we were lucky in being able to see much of the landscape of the North part of the island which can sometimes be a slightly soggy affair. For us the sun shone and we found great spots for morning coffee and for a lunch of paella in a very small, Gomeran restaurant well off the beaten track for most tourists. At La Caleta we were also able to persuade Mike along a narrow, high ridged road to the small beach beyond the mountain which, he agreed, was worth the drive.

Monday turned out to be a Festival Day – one of those festivals which just seem to happen without particular warning in a single town and which occurred in San Sebastian on James’s last full day on the island. We now suspect that the festivities of the Saturday night were part of the celebration and we heard about, rather than saw, the actual festival on the Monday which seemed to be described as a longish service at a small remote church balanced on a promontory about five miles from San Sebastian itself and to which townsfolk were transported in buses at around 10am and transported back mid afternoon? Most of the local shopkeepers either attended this or at least took the opportunity to close which put a slight dampener on James’s plans to take back local produce for family and friends – though he did manage to find some goodies, albeit at the airport in Tenerife the following day.

And so, James’s time on La Gomera came to an end and the following morning we all caught the early morning ferry and made our way back to England – this being the start of a frantic two weeks for Mike and I as we tried to fit about six weeks worth of things to do and people to see into the two weeks we had allowed ourselves.

Needless to say, we weren’t successful and unfortunately not all the things planned were achieved. Worse still, we didn’t see everyone we wanted to and, in our view, not enough of those we did manage to catch up with – though they may disagree of course!

We were able to see both Mike’s dad and my mum – though Mike wasn’t able to join in the mum trip as he was busy spending money by ordering a new pig, a satellite phone, toilet repair kits and various other necessary purchases as well as meeting an Estate Agent, charity shop folk interested in some furniture from dad’s house and arranging a skip. The one skip actually turned into three skips as the week wore on and Andrea and I joined him in the house clearance. Andrea will be the first to admit that the job is not an easy one, especially when – because of time and other constraints – the only option seems to be to throw away some good stuff. But we all did our best and, with the help of friends hope to have made the best of a difficult task.

We will remember a number of special socialising events: a trip to the smallest pub in England with Caroline;  a meal for 13 at Dave and Maggie’s – especially the Squid stew;  a night out in Manchester with Nikki and Malc – and being asked to leave a Manchester pub at 11.00 as they were closing;  several drinks with great Merseyside friends in the Ship and Mitre in Liverpool – though unfortunately the dreaded “lergy” seemed to have afflicted a couple of people before we arrived meaning they missed out;  a visit to Steve and Mary in their brilliant new away from it all abode in Wales; nights in Winterley eating great Steak cooked by Chris and John and saying cheerio to Sue and Steve who were moving to Parga and time spent with Andrea, David, Fiona and Martin [oh yes and a certain Irish show champion and her other animal friends] .

It was also great to be able to meet up with John who had shared our first leg from Liverpool to Ireland, though unfortunately, at the end of our stay, we were greatly saddened by the death of his dad Brian who we had visited in Arklow and who had recently undergone a serious heart operation.

And so, that brings us back to the present – here once more on La Gomera, preparing for the next major leg of the journey to the Caribbean via the Cape Verde islands. We will let you know………

Permanent link to this article: https://www.sigasiga.co.uk/2011/10/27/family-and-friends-in-the-canaries-and-england/