Panama Canal – without using an agent

If you have read my previous post about our Panama Canal transit you will know that we were joined by James, John and John. As always, it is really exciting to have family and friends on board and to be able to share their holiday. Unfortunately they were only with us for eight/nine days but, as you will read below, those days were fun packed.

James booked an extended trip taking in several cities in the US so he flew to us via Miami and, as apparently often happens when Miami is a transit airport, he did not manage to catch his connecting flight. John and John did make it all the way as planned and they therefore had a “head start”!!

Yes, the Panama hat had to be bargained for. We spent a good couple of hours around market stalls and in and out of shops and I have to say John B is a tough act when it comes to bargaining – much better at it than we are. …. 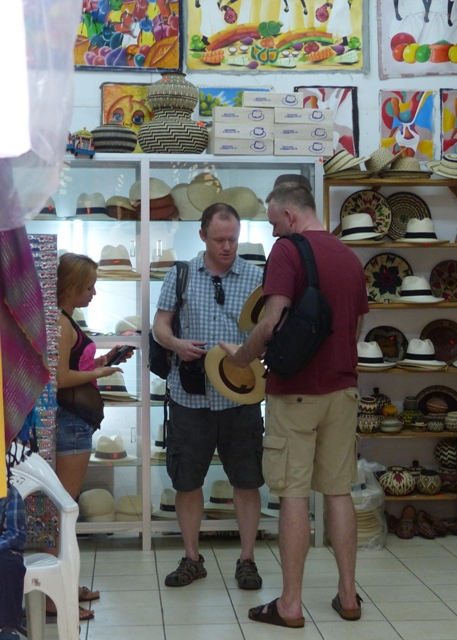 Despite the fact that, as many of you may know, Panama hats actually originated in Ecuador the ”boys” were very proud of them. 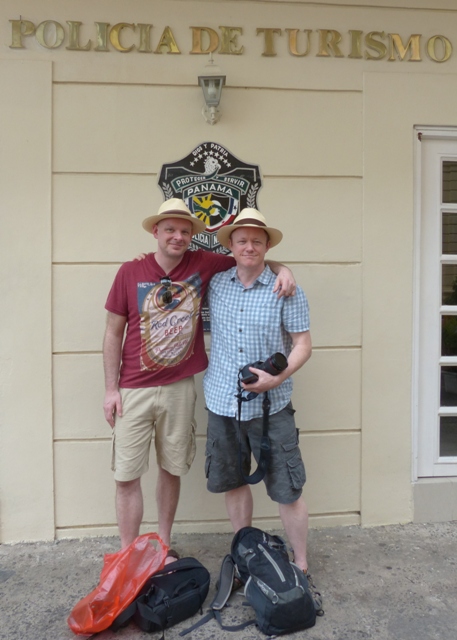 After all that hard work we had to have a beer and, as regular readers will know, we have a favourite Panama watering hole….. 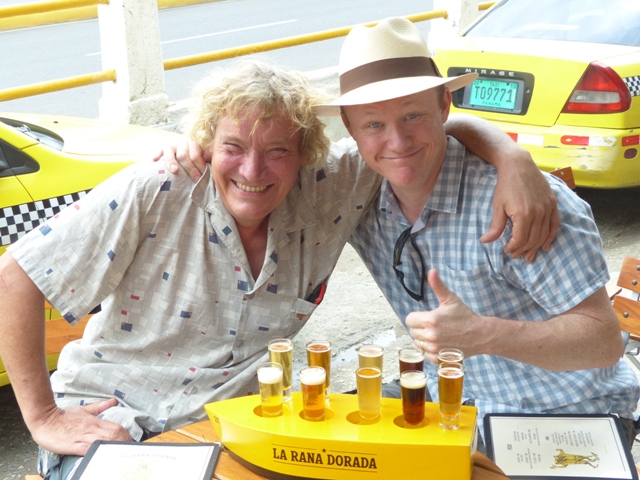 It became a favourite with our visitors too. They were in Panama City for about four days in total and the “Rana Dorada” was visited on three of them! Well, there are five different beers and they all have to be tried – though the special pale ale did seem to be a winner.

Fortunately James caught up with us at this stage and we then went for Sunday lunch at the “Mercado de Mariscos”. $1[66p] beers, Ceviche and sunshine – you just can’t beat it. 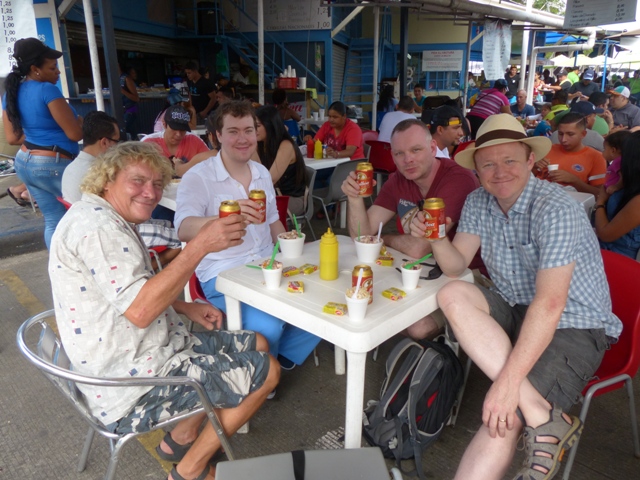 As you can see, it was an exhausting day! 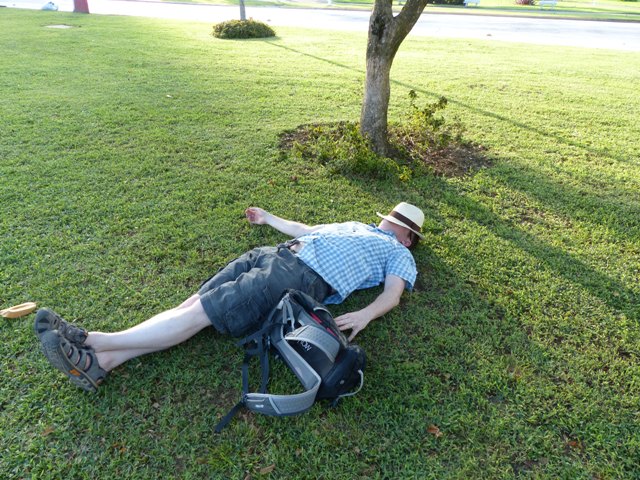 The following morning we had to make our way back to Shelter Bay. I left early to ensure meeting up with Jack and Christine [our other line-handlers] and left the men folk to make their own way back from Panama City. So, they promptly had an adventure. They caught a bus which, in most countries, would have been on the scrap heap many years ago and half way back it broke down. They therefore had to squeeze onto the next bus. Given that buses already have more people on them than seats, getting a second bus load of people in as well must have been a sight to see. I am sorry I missed it – from the viewing perspective that is!

The two day canal transit came next [which you have, of course, already read, marked, learned and inwardly digested fully] – with lots of laughs shared by the crew. Given that the two John’s are Irish and that Jack is of Irish descent [and has an Irish passport to prove it!] it meant that there was lots of blarney and “taking the Michael” – some of it whilst drinking one of my favourite tipples, “Bushmills” which James had very kindly brought for me – in quantities sufficient to bring me joy for some time.

Once through the canal there was still time to get out and visit one of the nearby islands – Isla Taboga.  The Lonely Planet states that it is 20km [approx 12miles] from Panama City. We know better – it is more like 12km [7miles] which made for a nice one and a half hour sail to visit our first Pacific Island. 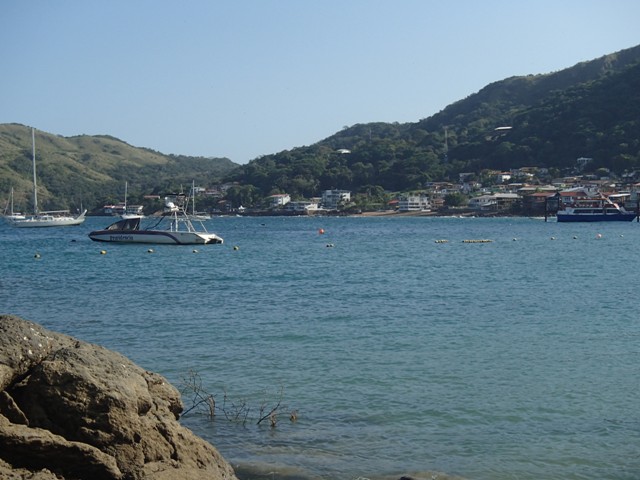 Taboga has only one road – but no traffic and for most of the week it is very quiet. At weekends Panamanians come across in hoards but, even then, they often make it a day trip and the beaches are therefore more or less deserted from 4pm onwards. 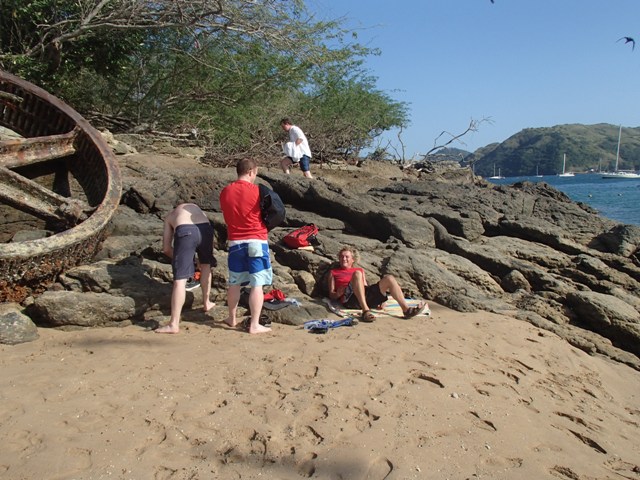 Unfortunately the snorkelling around the town beaches is not very good but we enjoyed the swim. The view from the restaurant was also rather fine…. 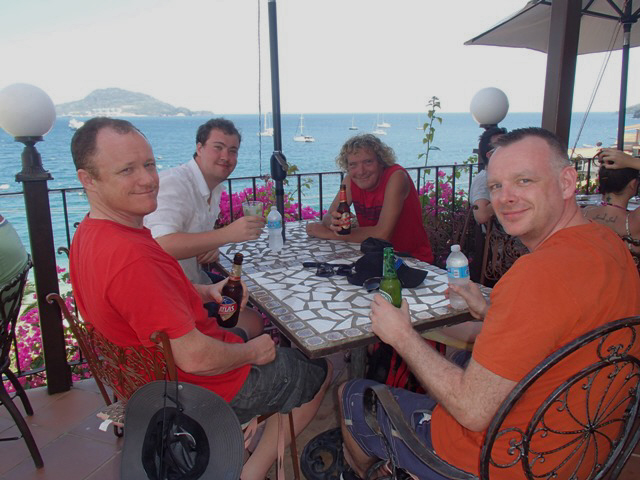 ….. as was the food. John and John shared a brilliant paella and, as you can see we played at “responsible adults” [Yes, that is water being drunk]!

It had been our intention to return that evening and also to have a photo shoot the following day as there was lots of local colour but, having nearly tipped the dinghy, got everyone completely soaked and made John B and James swim to a fishing boat tied off shore so that Mike could pick them up after they had pushed us out, we decided against it. The beach really shelves and the tide is strong. We now know [well, were later told] that when the ferries are not operating – i.e. between 11am and 3pm and between 5pm and 7am, it is possible to tie up to the small pier. This would have been a lot simpler and safer.

We decided to sail round the island to see if we could find better snorkelling. We did find a spot where there were several rays which we could see from the boat but, once in the water, visibility was poor and none of the swimmers saw them. There was still much rejoicing about being able to dive into warm water in January but probably the best bit of the day – at least for John B – was being able to “sail a big boat”. 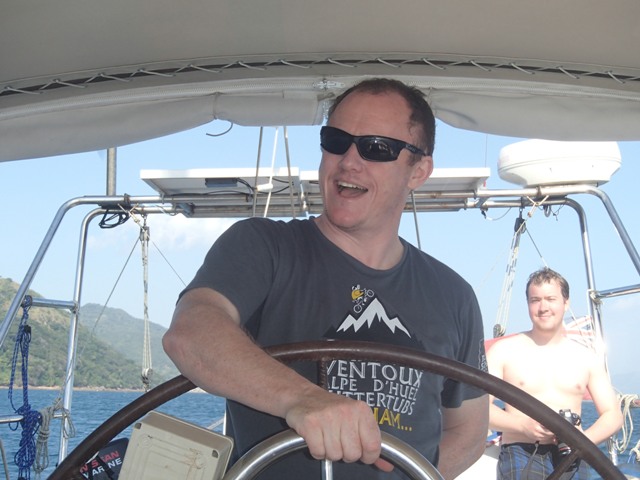 In our enthusiasm to pull out the mainsail we managed to get it stuck and, following our return to the mainland, John offered to climb the mast and free it. 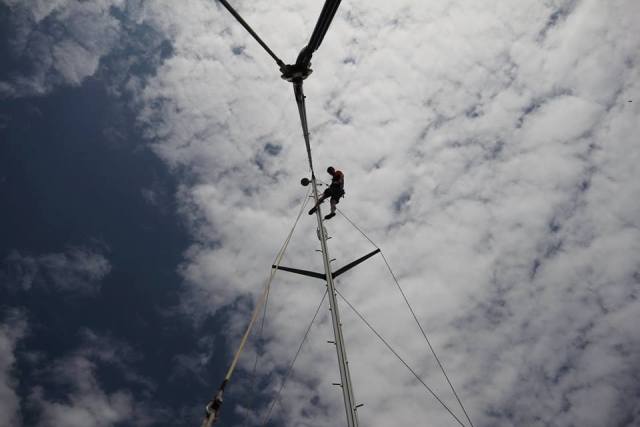 He also volunteered to grease all the mast steps [this is the kind of guest we really like!] and to remove our deck-light from half way up so that we could replace it.

There was something in it for John too – some great photos, like this, for his album…. 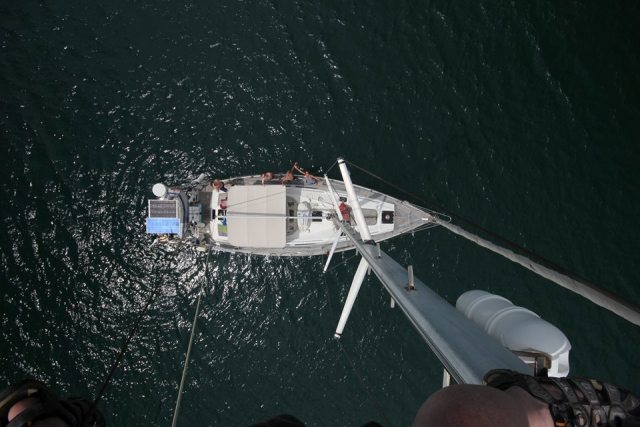 The week went really quickly and all too soon it was time for them to leave. It really was sad to see them go – hats and all….. 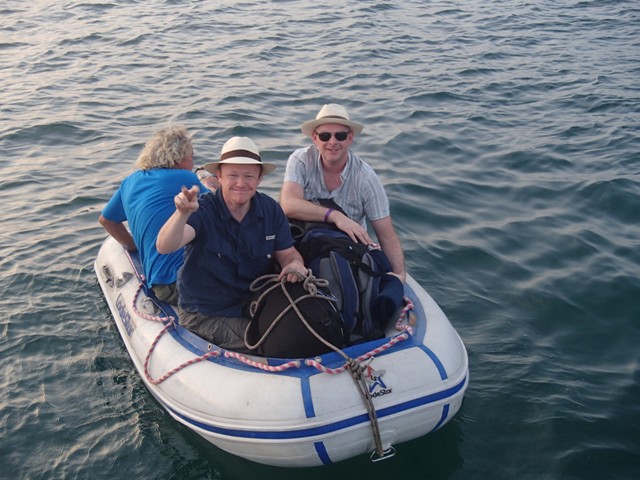 ….. but an early flight on Sunday morning awaited. James, however, had a couple of days remaining and, after dropping the Johns ashore Mike went to try to hire a car. What a performance! To cut a long story short, James ended up hiring the car for us [using Internet] at half the cost Mike was quoted when he went directly to the rental place. However, the real reason why Mike didn’t return with a car – even given the inflated price – was because he couldn’t remember the pin number on his credit card. Well, we normally only use our debit cards and no-one has ever insisted on a credit card before – but all the car rental companies do – we know because Mike tried a second one too.

So, having saved the day James then had the task of driving us around.

On Sunday we went inland to the small town of “El Valle”. The Lonely Planet made it sound like a fabulous place with a Sunday handicraft, flower and vegetable market. I think Mike and I had visions of something more akin to the markets we found in Nicaragua and we were therefore a bit disappointed that viewing the whole thing was possible in about two minutes.

Still there were a few craft stalls…. 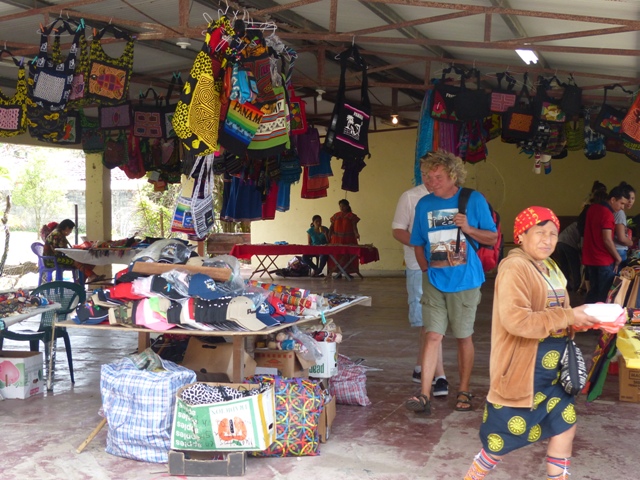 ….and the quality of the vegetable produce was excellent… 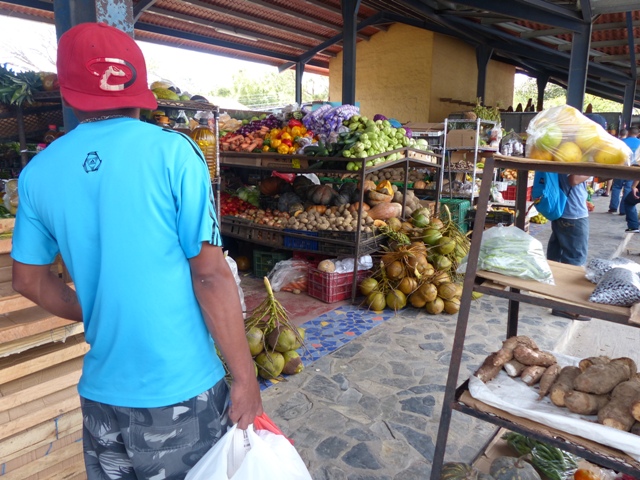 Best of all, from my perspective, was the chance to take some candid photographs… 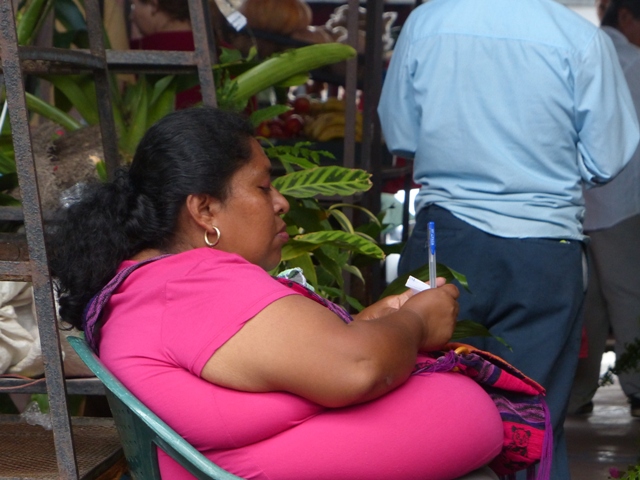 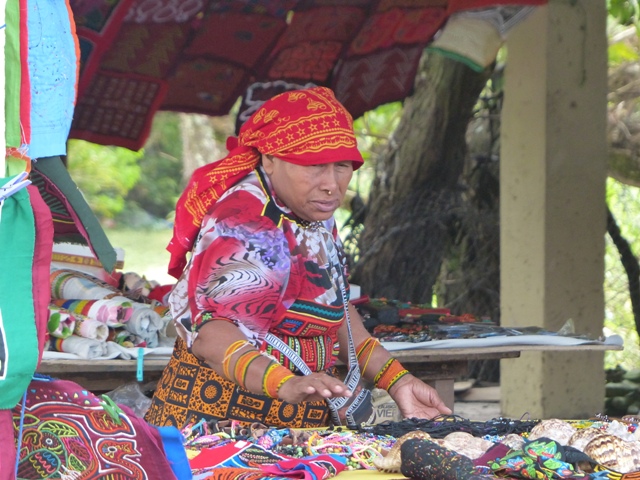 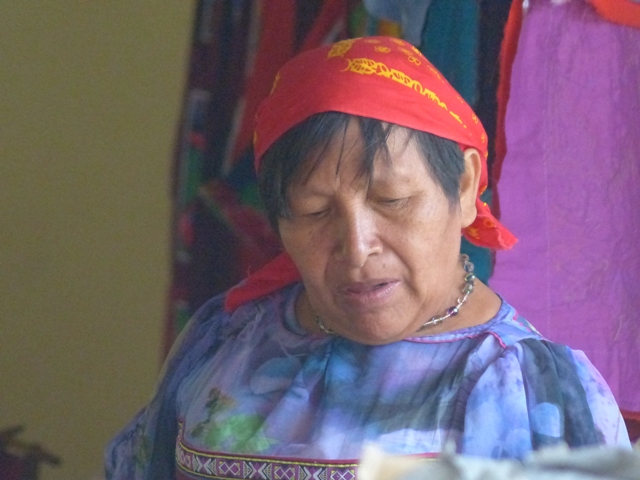 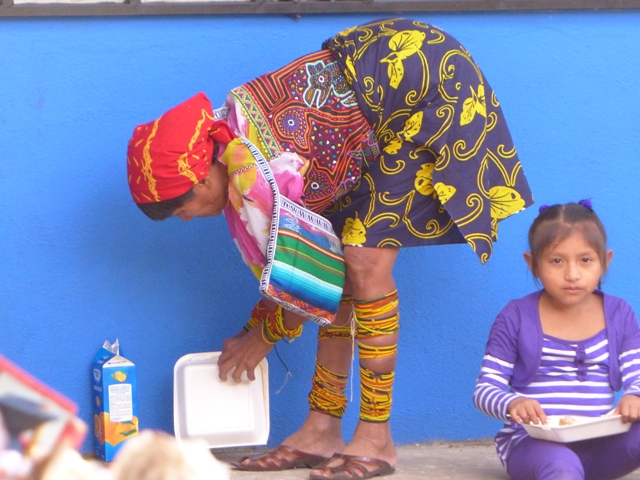 Monday was James’s last day and, having spent about two hours driving round and round the City’s complicated road system with other motorists cutting in and turning where turns shouldn’t even be contemplated and blaring their horns [not necessarily at us] we finally managed to escape and make our way to Portobelo to leave our sail to be mended and to show James the old forts… 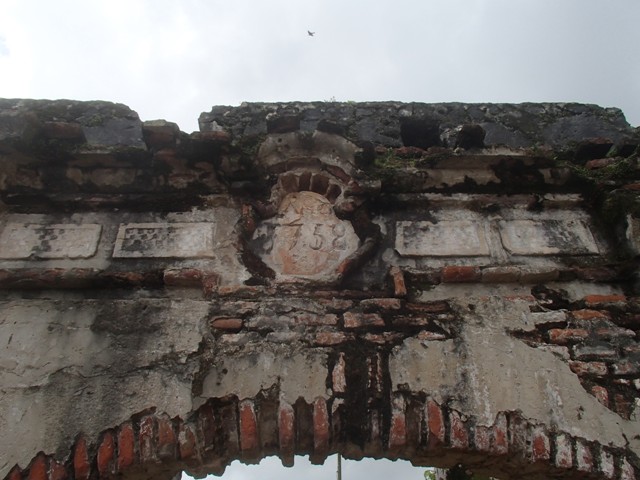 ….and the custom house…. 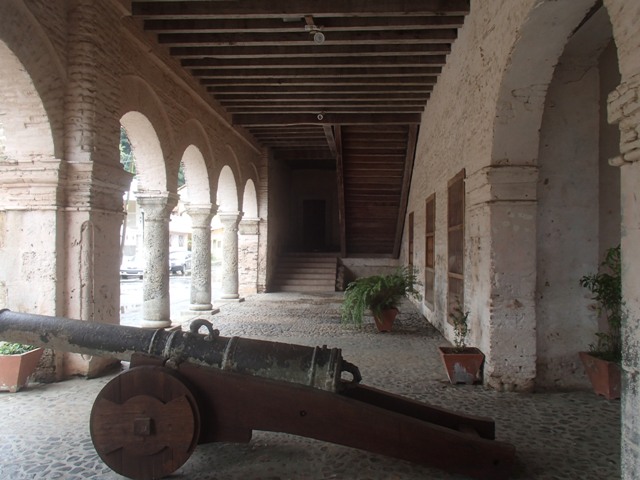 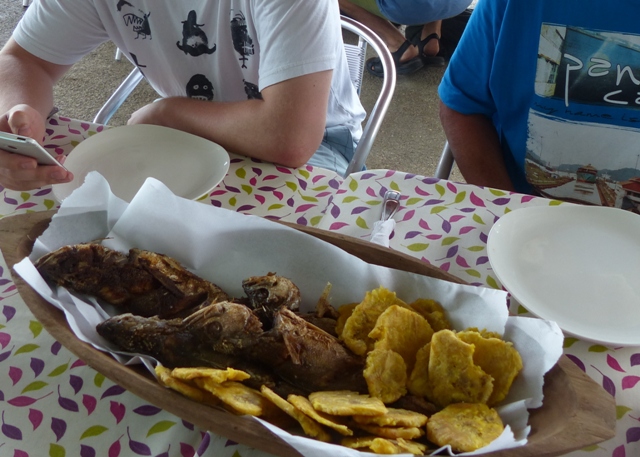 ….before having yet another sad farewell…. 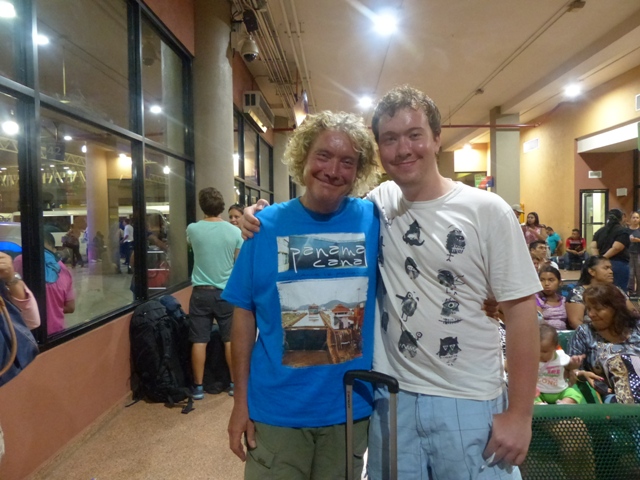 James caught the 8.00pm overnight bus to Bocas del Toro and from there was visiting Costa Rica, Miami, Philadelphia and New York. We just returned to Siga Siga to think back on the excellent week we had shared, grateful at having such fabulous friends and family.