Central America – a few tips and thoughts about accommodation, transport and border crossings

OK, so at least I am back in business even if “Siga Siga” is still suffering. The delay, since my last post, has been due to a faulty laptop. We thought that the hard drive had packed up but fortunately it was just the keyboard, now replaced with a Spanish one. Extra letters, three symbols on some keys and the laptop not recognizing that it now needed to “speak” Spanish caused a few problems but Mike patiently resolved these.

To give you all advanced warning, this, and the next two or three posts, are going to cover our time spent in Central America as “backpackers”. I decided that you would fall asleep or throw your laptop/iPad/computer/whatever out of the window if I tried to cover the whole trip at once so I am starting with Bocas….YES Bocas del Toro – we finally got there, albeit by road and water taxi.

From Shelter Bay, the only way to Bocas is via Panama City. Well, actually that is no longer true as a new once a week ferry service has just started from Colón – but in August the only way was via the City. Liking the place as we do, we decided to spend a night there and finally managed to visit a small “temporary” restaurant called “The Fish Market” which gets rave reviews on Trip Advisor. 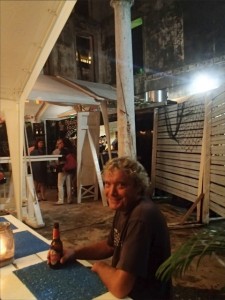 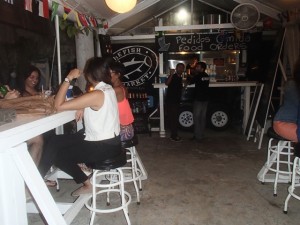 It is situated in the remains of an old warehouse and operates out of a converted van. The menu is limited to about three main course items and, although good and relatively cheap we perhaps didn´t find it lived up to its reputation though we possibly went a bit too early in the evening.

As we wandered along the malecón we did enjoy watching a raccoon which was eating the remains of an ice-lolly….. 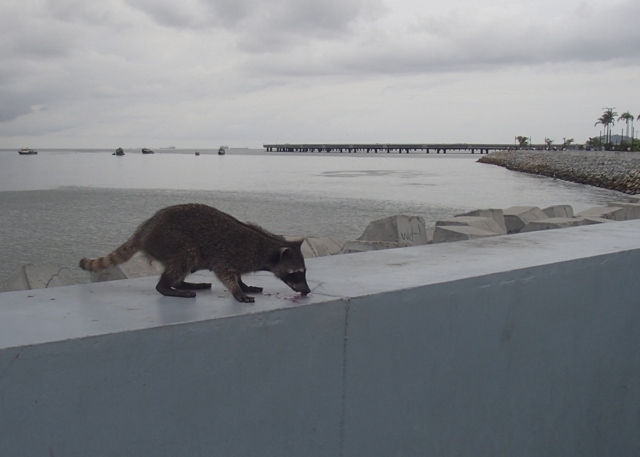 …and also a “photo shoot” which we came across in one of the old town squares the following morning. 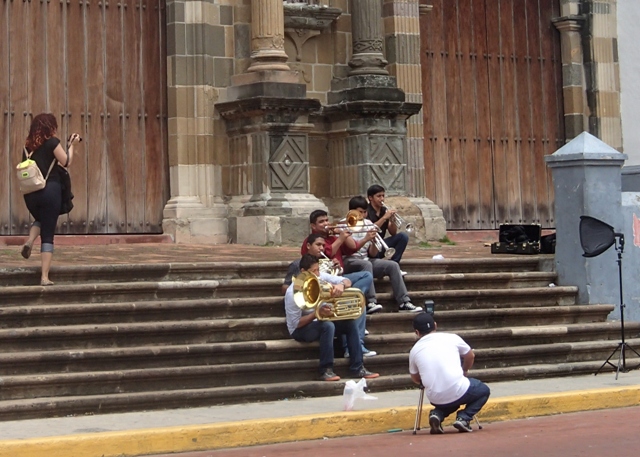 Not sure whether it was for some form of authenticity or it made them feel more comfortable and less camera shy – but they were playing whilst their photo was being taken.

We enjoyed a lazy day and at 8pm that evening [Sunday August 24th] caught the overnight bus, arriving in Almirante in time for a very early morning taxi ride across to the Archipelago. 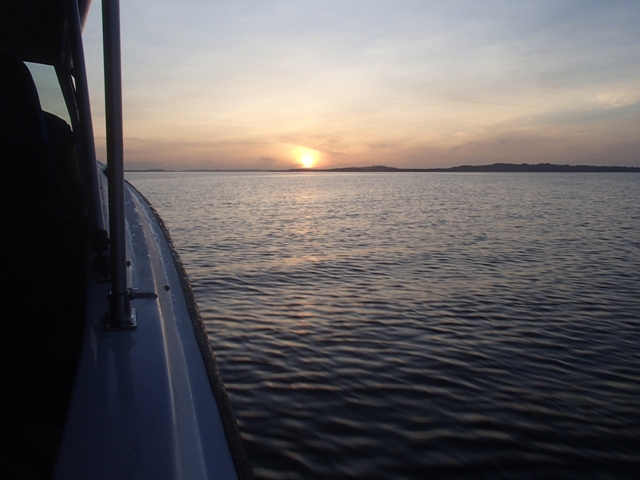 Bocas town is not at its busiest at 6am…. 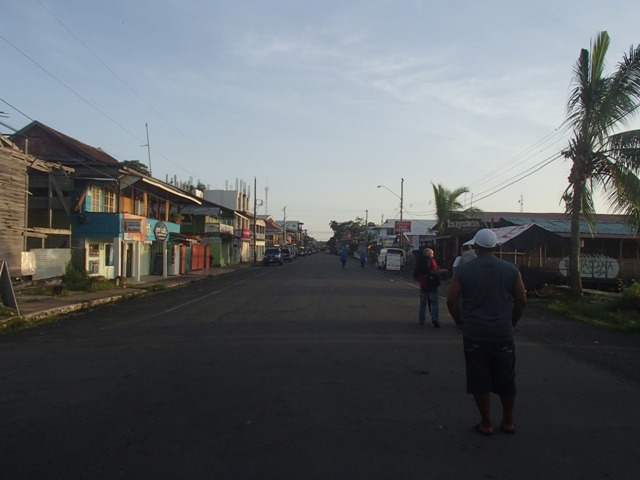 ….and because our accommodation wasn´t immediately available [hardly surprising] we availed ourselves of the free bikes provided and rode out to Big Creek. 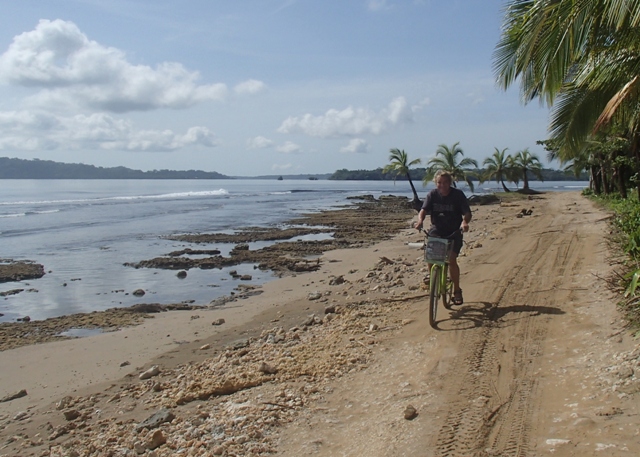 We had been a bit concerned before going to Bocas that all we would see would be rain, followed by more rain because all the reports we had been getting for several weeks beforehand was that the rainy season had really arrived in Bocas. Maybe we were very lucky or maybe the weather was changing but for three days we had bright sunshine and everything looked lovely, calm and blue. 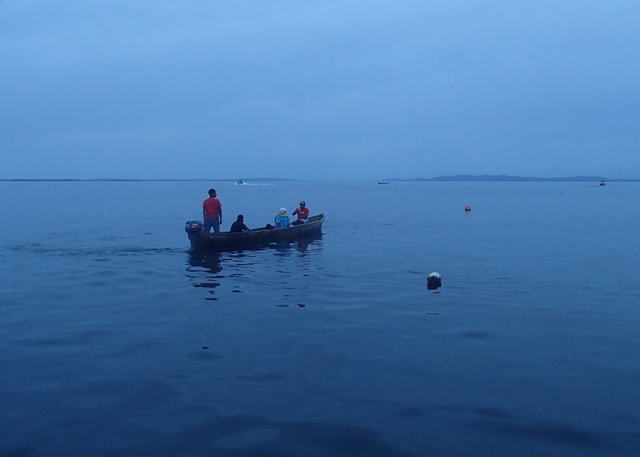 As you can see I was feeling pretty relaxed and pleased to have made it to Bocas at last…. 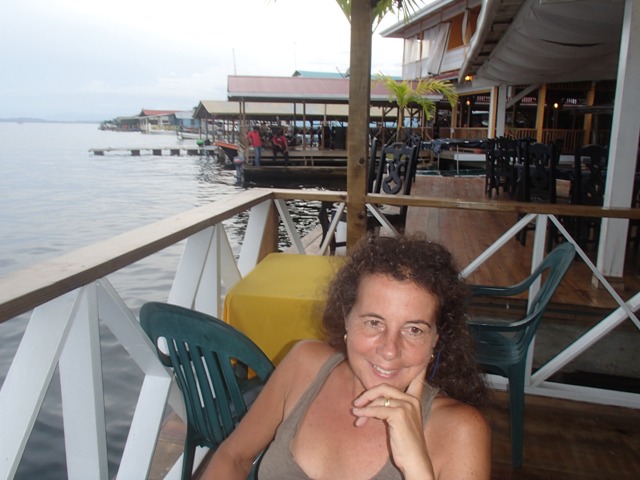 ….and was even more delighted when we found an excellent Indian restaurant called “OM”. 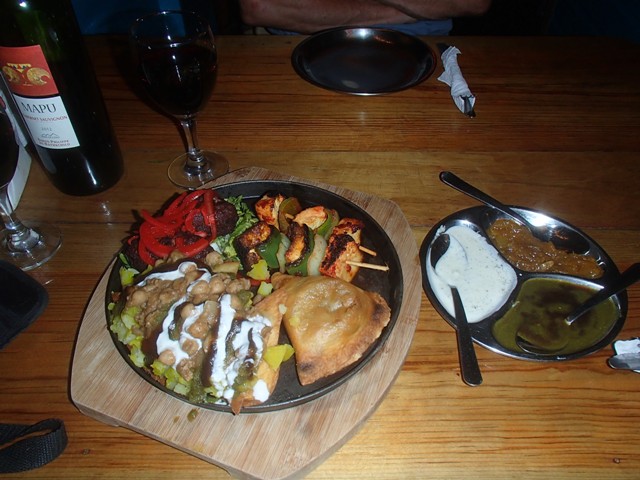 Maybe my and Mike´s relaxed mood came about because we were no longer lugging three heavy cans of antifoul. What….? and Why….? you may ask. Well, believing we were going to sail to Bocas we had agreed to transport some antifoul to a friend. As you know – we tried and failed twice but didn´t want to let Kevin down. An alternative might have been to keep the antifoul and give him some money – but it isn´t compatible with what we have so it was of no use to us. Anyway we wanted to see Bocas so it seemed the least we could do. Don´t try this at home folks, unless you really need to. After 30 seconds those wire handles really start to dig in! Still it was great to see Kevin, especially as he is now travelling north back to the States so our paths might not cross again…..though you never know.

Anyway – enough of that and back to what we did. Despite our relatively short stay we managed to see quite a lot of Isla Colón [the main island] by catching the microbus across to Bocas del Drago on the north western tip. From the end of the bus route we were able to take a short 45 minute walk through mangroves and along the water’s edge to Starfish [Estrella] Beach where there are several small beach cafés. 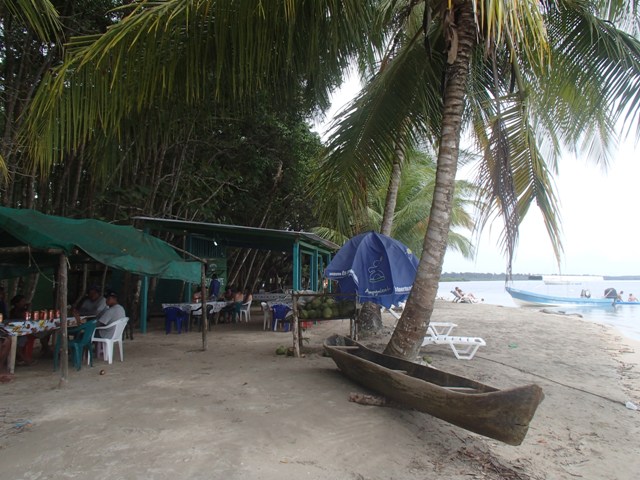 Unfortunately we didn´t know this in advance and had had lunch at the larger restaurant near the bus stop. Anyone following in our footsteps would be advised to walk along the front of that restaurant and follow a faint path which looks like it is going through a private house/small resort but which in fact winds its way round to the lovely beach.

Anchoring is also possible off the beach…. 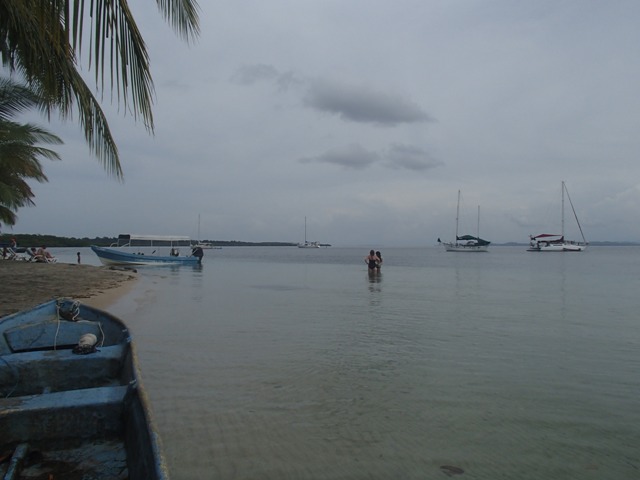 ….and I imagine that it is a lovely place to snorkel before swimming or dinghying ashore for a cold beer and perhaps having a BBQ in the evening. We know friends who did this [hello “Nauti Nauti”] and are still sorry that we didn´t make it on “Siga Siga”. The option is of course still open to us but there are also so many other places to see and, at least, we have now been to Bocas!

We also took a small water taxi across to the much smaller Isla Carenero which we thought was a lovely spot. We walked around the whole island – even though the path did seem to disappear at times! This took about a couple of hours with stops along the way to look at the scenic landscape art…. 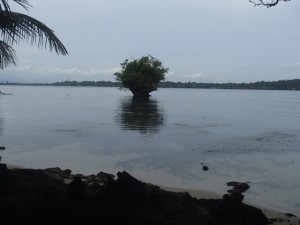 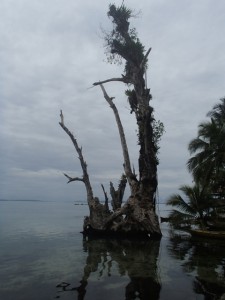 ….and, just for Preston, we took photos of scuttling crabs. They disappear down those holes faster than you can blink and are really quite funny when they wave their big claw to try to scare you off. 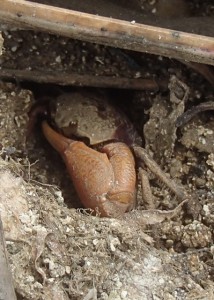 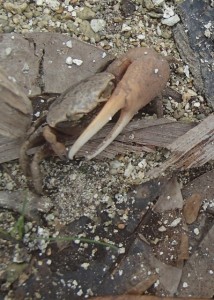 Even though the crabs aren´t very big I suspect those pincers could give quite a nip.

Speaking of crabs – we ended our walk at a lovely “Cosmic” one where we enjoyed a lunch of home-made hummus and calamari. 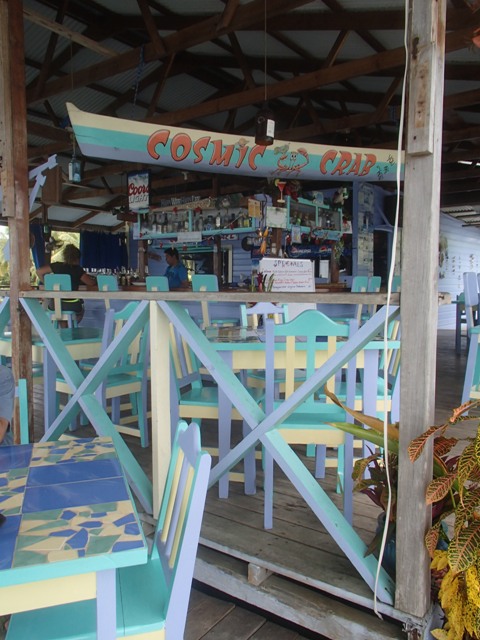 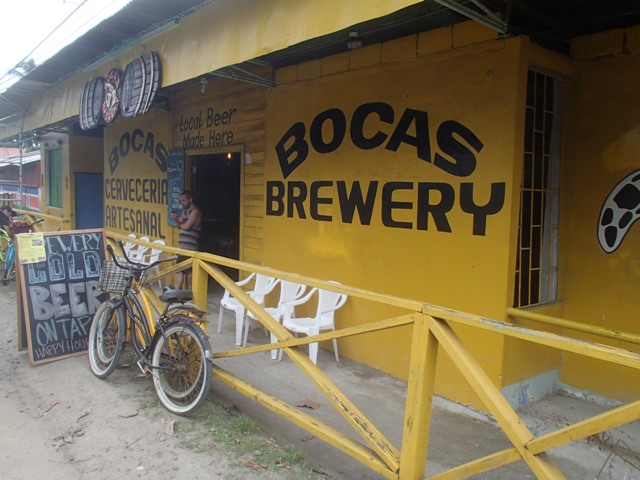 Unfortunately Mike didn´t think the beer was that good despite the options available…. 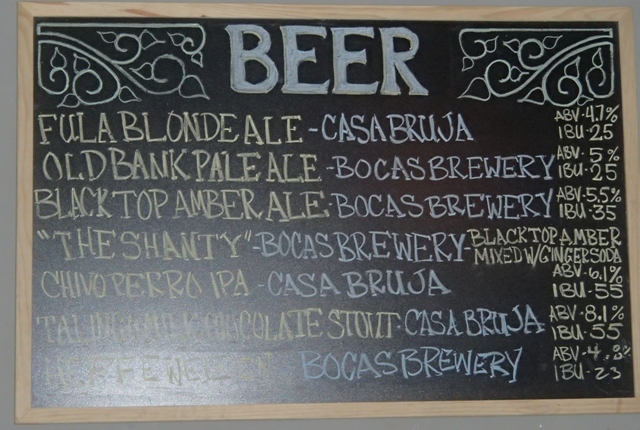 ….OMG…has he found a taste for lager or something!!!! 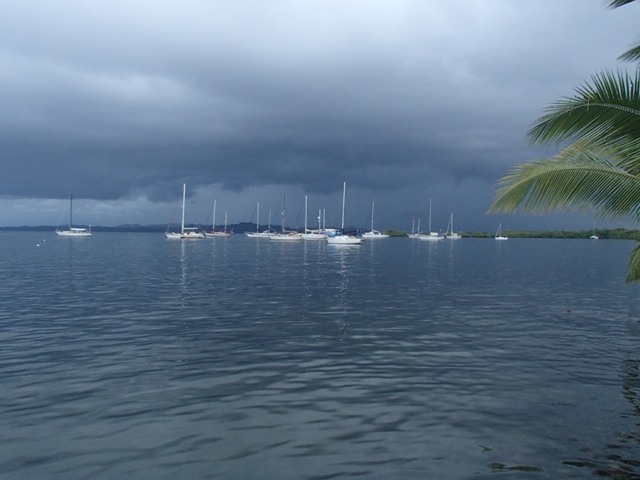 ….and dropped several gallons of water in seconds – but was fortunately only short lived. The photograph was taken from the bar of Bocas Town Marina and shows the nearest available anchorage to Bocas Town. Unfortunately we did not have the time to visit Red Frog Marina on Isla Bastimientos and were therefore really pleased when friends berthed there came across to share coffee in the morning and to take us to Fish Taco night at Bocas Marina.

Thanks Allen and Patricia [“Nauti Nauti”] and John and Jerie [“Peking”] for making our last evening in Bocas a memorable one with drinks, fish tacos and great company 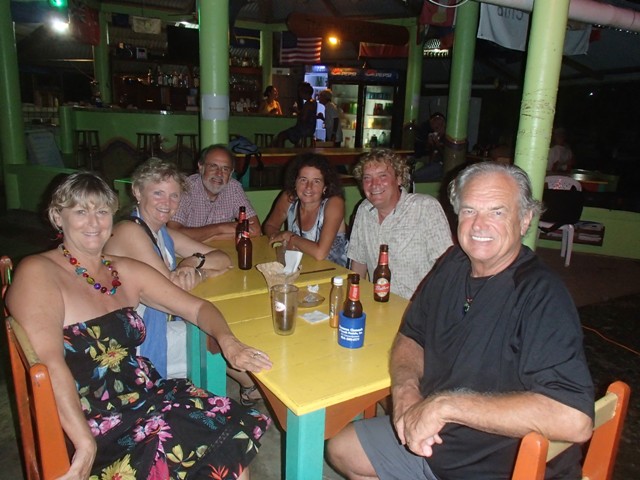