Passages to and from the San Blas [Kuna Yala]

Since my last post we have sailed two passages and spent the 4-5 weeks between them in the Kuna Yala. I was going to try to capture it all in one blog entry but decided that it might be better to split it up and, for this first post, just tell you about the two passages.

The first passage -San Andres [Colombia] to El Porvenir [Kuna Yala, Panama] was 247miles and took us 49 hours. We knew before leaving that we would be sailing against a current and, indeed, we had approx 0.5 – 1 knot against us all the way. The time taken was almost exactly what we had estimated so, having planned our departure at around midday meant that we arrived at our first small anchorage – El Porvenir – with the sun at its highest which, as many of you will know, is the best light for negotiating around reefs and shoals.

We managed to sail for 27 of the 49 hours, the rest of the time was spent motor sailing – during the first afternoon this was because of squally conditions with wind direction/speed shifts which were making sailing uncomfortable and during the final morning because the wind totally dropped.  The middle sailing day was really good – the wind stayed in the 13-18k range all from the NE, there were almost no clouds and we just relaxed and enjoyed it. We also had a full moon every night which always seems to make the night watches more enjoyable.

Although the journey was, in the main, uneventful, there were a couple of weird things which happened with the electronics. At 19.30 on our first day, the instruments started beeping and we had a “No Rudder” signal came up. No rudder??? Not good! However Mike quickly determined that the boat was steering perfectly well on “standby” but he still decided to demolish the bed just to check that nothing was loose. As it wasn’t we went back onto “auto” and had no further problem. Then, just after midnight on the second night the chart-plotter went down – guess who was on watch – Yup, me. I decided that I didn’t need to wake Mike because our position was showing on the VHF and, by using our spare computer [which has the same charts on it] I could plot our position hourly. It meant we were also without AIS but we had the full moon and excellent visibility – and anyway we have only had AIS since December, so I am well used to operating without it. Of course, when it was Mike’s turn to stand watch he fairly quickly fixed it by turning it on and off several times and re-linking it to the overall system.

So, what was going on? Well, since our layover in the Rio we have been having some issues with wiring and fuses – the humidity having caused some rust/corrosion – and we believe that these incidents were just two more affected connections. Mike has now replaced the old main fuse box with a sparkly new spare we were carrying and fingers crossed, all well and good on all electrics since

Our second main passage, which we undertook a few days ago was from El Porvenir to Cartagena [Colombian mainland]. This was 212 miles and took 32 hours. It doesn’t take a genius to work out that having covered just over 45 miles less in this second passage but done it in 15 less hours it was quite a different trip.

El Porvenir – the point of clearance in and out when only visiting this part of Panama is at the western end of the islands. So, when we left the Kuna Yala we had the choice of sailing along most of the island “chain” [some of which we had already done during our stay]and then across the “Golfo du Araba” and then NE on a bearing of 030 for 90 miles or we could take the more direct route on a bearing of 075 all the way. The prevailing Trade Winds at this time of year are from the NE, but we have been getting some North and even slight NNW elements so, having debated long and hard and changed our minds about half a dozen times in as many hours of discussion we finally opted for the straight run.

Unfortunately the wind had just too much easterly in it and/or was just too light at times for us to sail effectively – but Oh Boy – could we shift when motor sailing. Although we had not been able to buy any fuel in the Kuna Yala we had worked out that we had about 50 hours worth of diesel – so actually doing the trip in 32 hours at slightly lower revs for much of it meant we had lots to spare and also that we had only one night at sea.

Above, I briefly mentioned the AIS. Well – it proved to be worth every penny on both of these passages. Our first passage took us across the Panama Canal approaches with lots of container ships and tankers plying the waters. At one time we were “surrounded” by these massive vessels all going in slightly different directions and at different speeds and it was really quite scary to look at the chart and see three red triangles heading our way at once. It’s even scarier when these become boats that you can see with the naked eye all converging on our position! But, the information showed that all was fine so we sat tight and, yes – it was. Nothing passed closer than 0.5nm.

Similarly, just outside the Cartagena approach there is a sand bank which we had to negotiate and as we were doing this another big ship was bearing down on us at 17kn. Watching its approach by looking at its and our relative positions based on our beam stanchions it really looked like it was collision course. However, the AIS info said the nearest CPA [closest point of approach] would be 0.66nm – and, sure enough, it passed behind us at around that distance.

These passing distances may seem a bit close to some readers but we are beginning to get used to it now. We do wonder whether having a Transmitter/Receiver and thus giving our position it both ensures that the large vessels know our course, speed etc and also know that we have AIS and can therefore understand what they are doing. Many of our cruiser friends with AIS only receive so although they could call up a vessel with the information given by the AIS there is no other way for the other vessel to know that they have been “seen” and that their track is being followed.

Anyway – enough of that. The two passages have been undertaken safely. We are now in Cartagena and, just so that readers who like photos aren’t disappointed it might be quite interesting to you to see how our scenery in our anchorages has changed following the passages.

We left from this view in San Andres…. 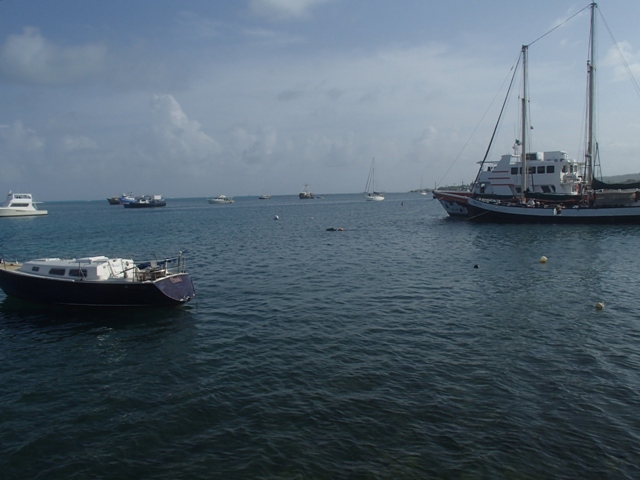 Had this in the Kuna Yala…. 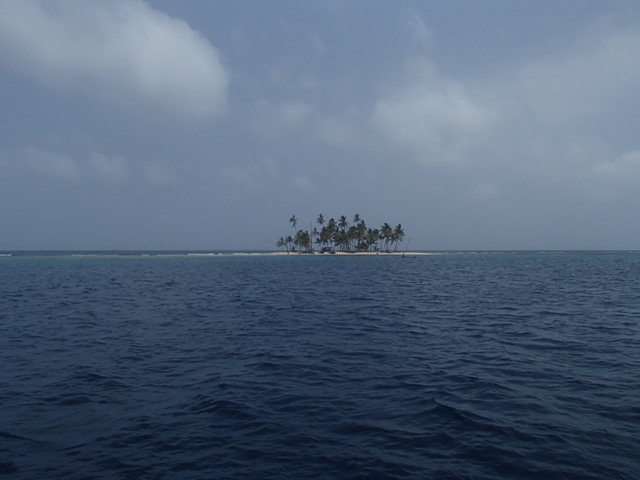 And arrived to this in Cartagena. 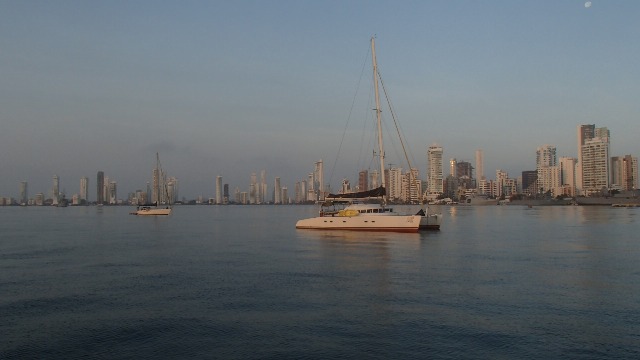 Permanent link to this article: https://www.sigasiga.co.uk/2014/04/27/passages-to-and-from-the-san-blas-yuna-yala/