A Taste of Providencia

At the end of the last blog entry I said “Cheerio” to you from Isla Providencia, Columbia and the following day at 6.00am we said “Cheerio” to the island as we upped anchor to set sail for San Andres. It was a lovely morning – perhaps a little too calm because with winds of 7-10knots we don’t really make much headway under sail. Still, a couple of hours or so of motor sailing gave us the chance to make 35 litres of water. The wind then rose to a fairly steady 13k so we turned the motor off and settled down for a nice gentle sail. Mike finds these occasions very stressful! [That is our friends Steven and Sandra’s boat “Yonder” sailing along with us] 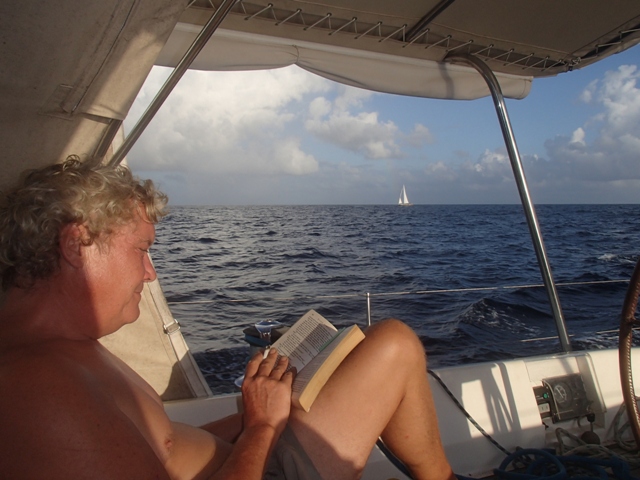 We covered the 58 mile trip in around 10 hours – the following current for the last part of the journey helping to make up for the relatively low wind strength. Once again we found an excellent marked channel – we have been pretty impressed with the Colombian Port Authorities. It is, however, quite clear on the approach why there is the need for all the strategically placed buoys – and the importance of following them -because there are two tankers and a fishing vessel stranded and rusting on the reef.

San Andres is a working port – containers come nearly every day and there seems to be a small fishing fleet operating. 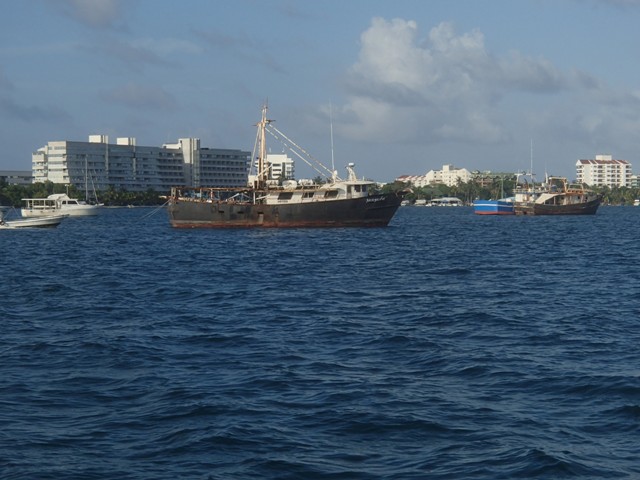 Despite the commercial traffic the water in the anchorage is remarkably clear. We have seen a turtle and can watch the fish swimming under and around our boat. One afternoon Mike called me to look at a shoal of medium sized fish which were thrashing and jumping over each other and out of the water right around us. We have no idea why this happened but they kept it up for about ten minutes and then just moved away.

The island is quite a contrast of the old and the new. As you can see from the last photograph there are quite a few multi-storey concrete buildings – mainly hotels and the town is a kind of town of two halves – the hotels and pedestrian shopping streets at the north end and older, smaller houses and business around them [on two sides anyway – the other two sides are sea!]. 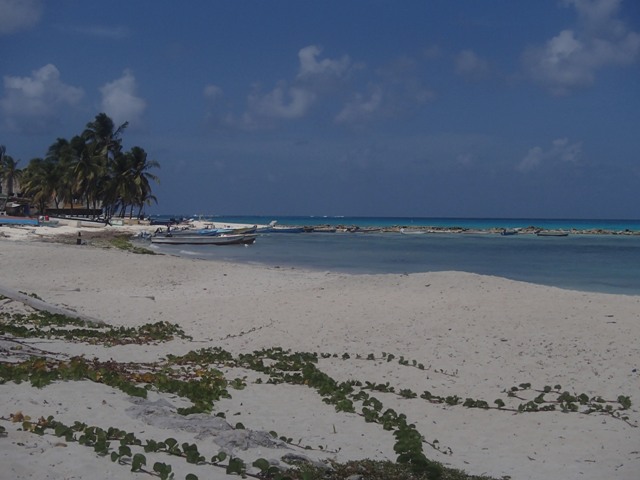 The beach above is part of the north town beach and seems to be a small fishing boat harbour as well.

El Centro [as the main town is commonly called] is the only built up area – the rest of the island is rural, mainly tree covered with colonial buildings and several churches lining a main route along the middle of the island and beaches along its eastern edge.

Like Providencia, many of the inhabitants of San Andres are descended from slaves and still speak Creole English though there are many more people of Spanish descent here. Everyone looks happy and we have felt welcomed wherever we have gone.

So, what has surprised us? Well, before we came we heard from other cruisers that they gave it a miss and only stopped in Providencia because San Andres was really touristy – or so they had been told by yet other cruisers. It seems to me that there is a bit of a myth being perpetuated here based on hearsay and not on anyone actually calling in. There are certainly tourists but they do not detract from the rest of “El Centro” or from the rest of the island. We think that Cruise ships used to stop here and no longer do. We also think that the island used to have a full duty free status and no longer has. Both of these things may account for a drop in tourists or maybe it was always like this.

Talking of Duty Free. Whilst it may no longer operate, you can still get some good deals if you are prepared to buy unknown brands. One bad experience a few months ago in Roatan with a bottle of what was laughingly called gin has taught us that these unknown brands need to be sampled first – well we have no problem with that over a two week stay. As a result, we are now the proud owners of several bottles of vodka @ £2.0/$3.00 per litre and of gin @ £3.00/$4.50 per litre.

Going back to tourists – Yes, there are tourist trappings such as at the famous “blow hole” at the southern tip. 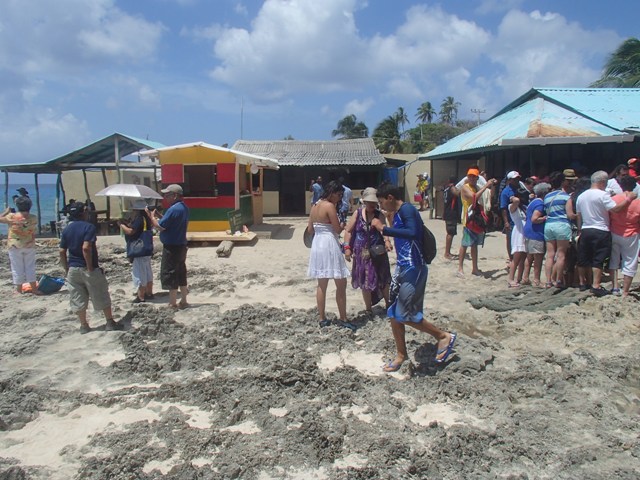 It appears that when the wind and waves are right a spout of water 20 metres high rises up from the hole, fed by water being channeled down a very narrow underground fissure from the sea. Of course, the wind and waves weren’t right when we visited though we did watch this group take it in turns to have their hair, shirts and skirts all blown up in the air by the force of something coming through the hole. Air I guess! No charge is made to see this natural phenomenon. There are a couple of T-shirt shops and souvenir sellers hoping to make some money but they were not at all pushy. 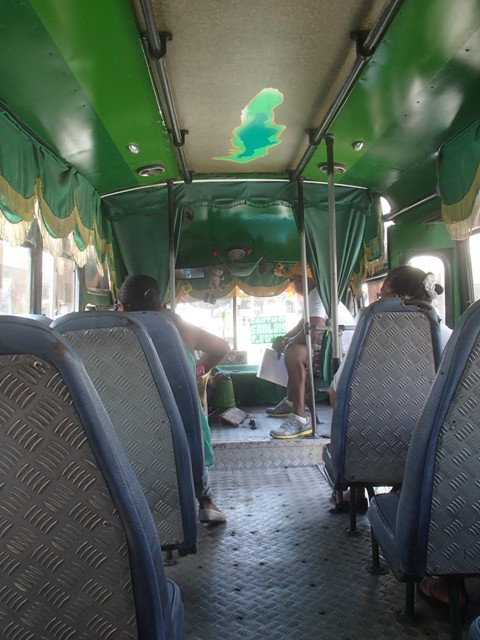 I just love the fringed curtains and the map of the island painted on the ceiling.

On one trip we passed through the small village of San Luis to the beach just south of it. 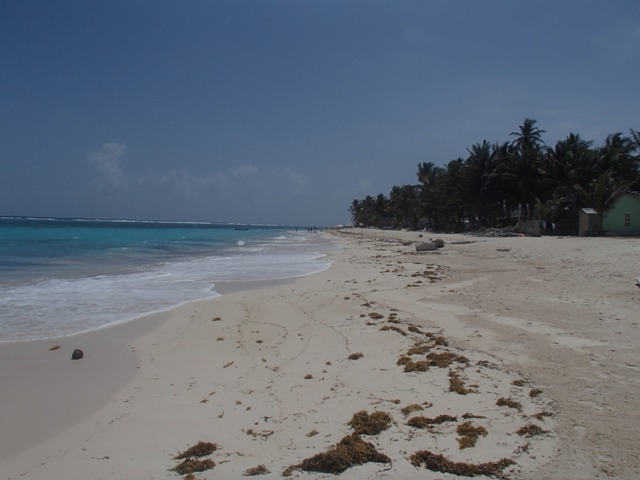 We had a nice relaxing lunch here at “El Paraiso” – beautiful fish and fabulous breadfruit chips. Had we known they had sun loungers and umbrellas and served drinks and food to the tables along side of them we might have brought our swimming kit and made a day of it.

Another day when we should have carried our snorkels is when we went across to “El Cove” on the West coast. 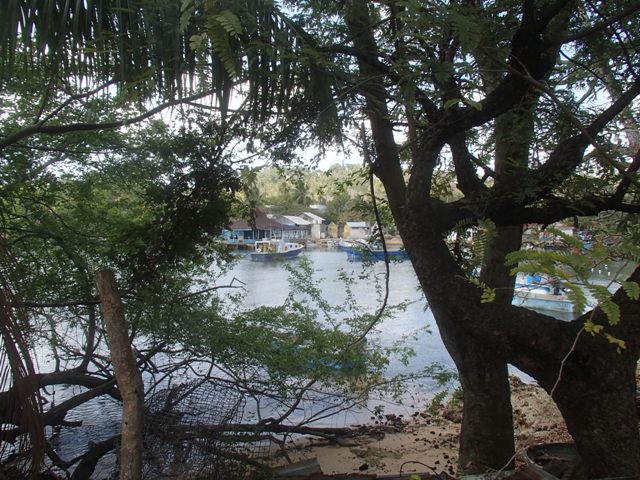 There isn’t much at El Cove itself – other than a naval base [didn’t think I ought to take a photo of that], but just down the road at West View there is a restaurant, a botanical garden and what is supposed to be the best snorkelling place on the island. To visit the restaurant there is no charge – except what you consume, obviously! To visit the botanical gardens and the snorkelling area it is COP 7,000 [$3.50/£2.45] and COP 3,000 [[$1.50/£1] respectively.

So, another pleasant surprise on San Andres is that where there is tourism it is not at all costly. Even the restaurant, which was the only one in sight, charged an average price and served good food.

Also, if one is prepared to eat with the locals [and why wouldn’t you] you can get a two course meal of soup followed by meat or fish with rice, plantains and veg or salad and a glass of juice for as little as COP 8,000 [$4/£2.80]. For double the price- COP 18,000 [$9.00/£6] – and in the extremely clean fisherman’s restaurant “El Capitan Mandy” Mike treated himself to this beautifully prepared and presented octopus. 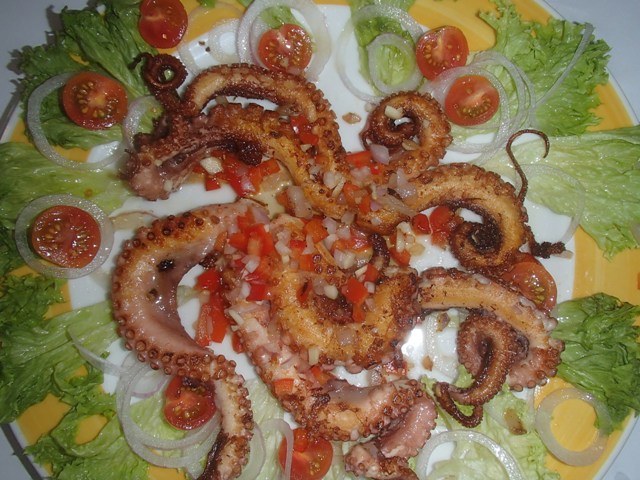 As well as the local restaurants, we have found that a little bit of pavement cafe sophistication is just what we needed, whether at outside tables on a veranda…. 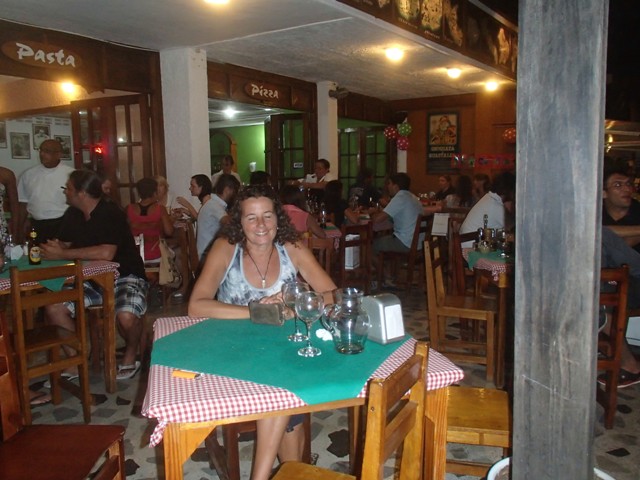 ….and no I wasn’t asleep!…… or at a roadside bar for a little cocktail to round the evening off nicely…. 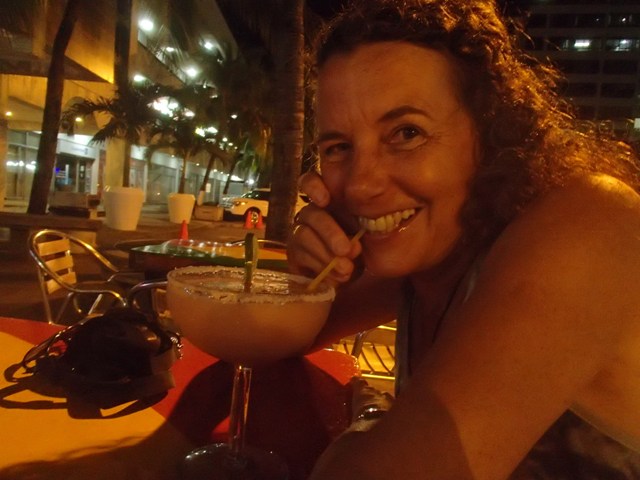 Something which did quite amuse us one evening was watching a group of people eating chicken wings at a tex-mex restaurant. 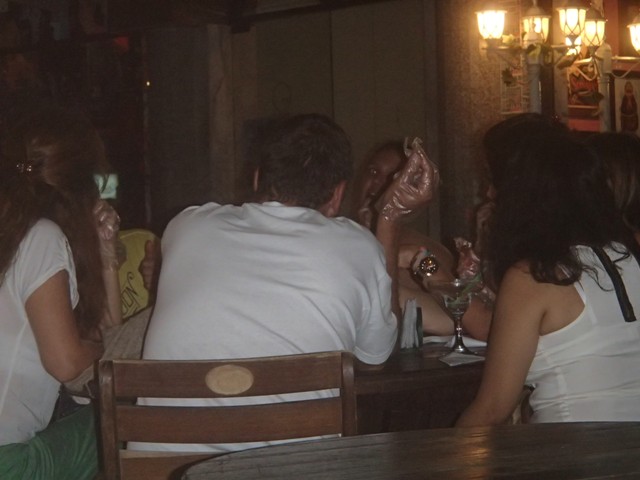 Maybe its just Mike and I who have never been to a place that provided plastic gloves so you don’t get your fingers mucky. They obviously don’t have the “finger lickin good” adverts around here. 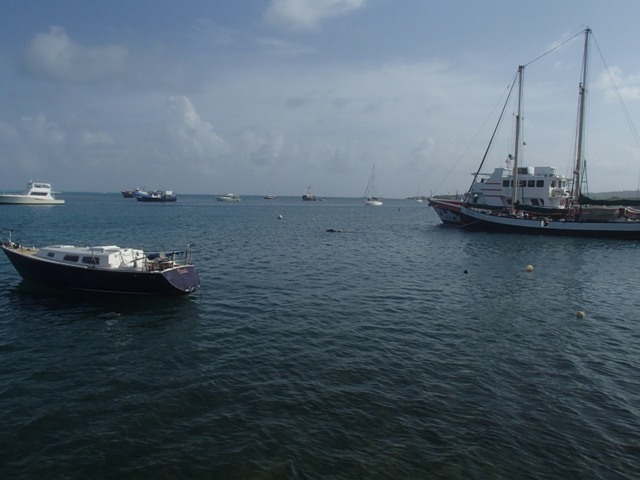 is just outside of “Nene’s” marina…… 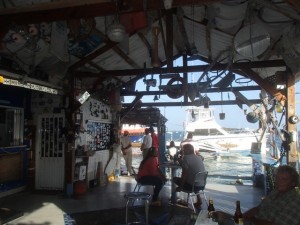 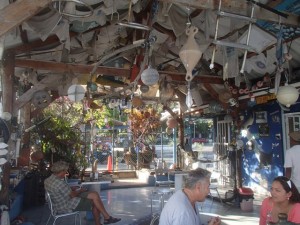 ….quite a whacky place which seems as though it was once fairly well used by sports fishing boats. Here we were met by “Rene”, the San Andres agent for cruisers [You might remember that I told you about the Colombian requirement for using agents in the previous blog entry] and we were charged $50/£35 for our next zarpe [which we get tomorrow when we leave].

Yes, we are about to leave San Andres, our second Colombian Island, and sail south east to the” Kuna Yala” – perhaps better known to all except the Kuna and those who have cruised there as “The San Blas Islands” of Panama.

But before I leave you I realise that once again I have talked about food and drink and given the impression that we can’t cope without alcohol. So I will leave you with this photograph of our beverage on our meal out with Steven and Sandra before they left for Bocas del Toro. 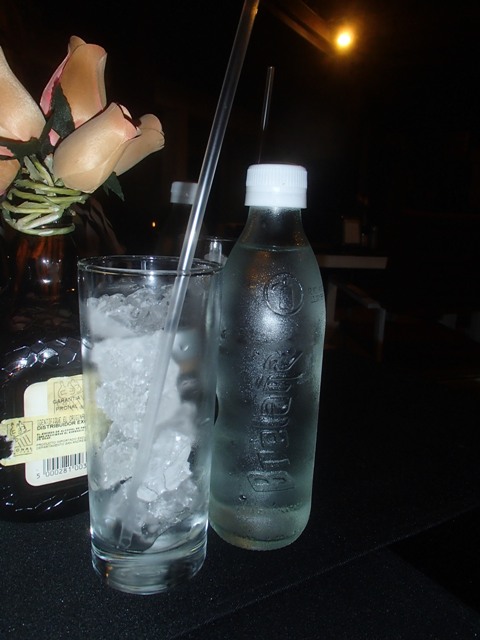 I know you might think there could be some kind of clear spirit in there but NO – it was pure unadulterated water – and that’s all we drank.

OK – I confess – it was the night before the election and there is a 24 hour ban on restaurants or shops selling alcohol…. and that was all we drank whilst at the restaurant. We had to have a nightcap to recover when we got back to the boat!!!!!

Permanent link to this article: https://www.sigasiga.co.uk/2014/03/14/san-andres-surprises-us/