Out and About – Roatan Anchorages

A few words about the Vivorillo Cays

Roatan to Providencia via Guanaja 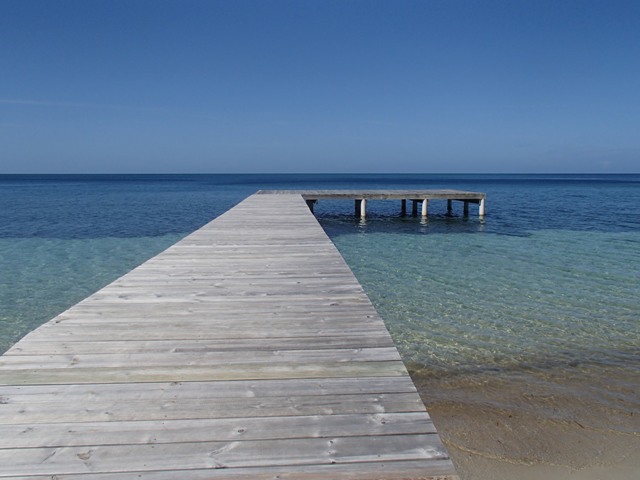 As reported in the last blog post we were waiting for a replacement part to come from the US – carefully couriered by Bob and Peg [JD and Linda’s son and wife]. This arrived on February 3rd which, rather miraculously, coincided with a favourable weather report for getting at least as far as Guanaja [the most easterly island in the Bay Island chain] with a probable good weather slot a few days later for the approximate 345 mile run to Providencia.

So, it was a day of stocking up on fuel and of supplies and an evening of visiting friends on their boats [Larry and Marlo and John and Becky] and at the Tiki Bar [John and Diane] for farewell drinks. Our final “boat of call” was Kokopelli where we shared some drinks and snacks and picked up our new alternator part. Thanks to Bob and Peg for bringing it and for Linda and JD who have been fabulous people to have as friends during the past 7 months. 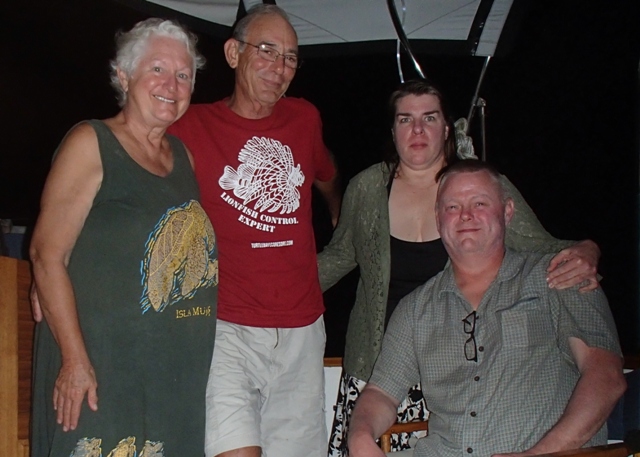 Note that JD is wearing his official “lionfish controller” T-shirt. He went on a morning course to learn the best way of catching these reef destroyers and is now able to use the special sling [rather than a spear gun] to catch them. Spear fishing of anything is forbidden in the Roatan Marine Park but, with a licence and using the right equipment, lion fish hunting is allowed. It makes excellent eating and culling them may help preserve the reef. Lionfish don’t destroy coral per se – they are just voracious eaters of other reef fish and have no natural predators themselves. As such, they aren’t [as yet] scared of “man” so it is apparently fairly easy to catch them. We thought about doing the course but neither us is very good at diving down wearing a snorkel and mask and being able to control movement under water – so it’s unlikely we would have passed the test. People who scuba have mastered the technique and, in fact, those attending the course all did the joint scuba/snorkelling option.

So, at 7am on Tuesday 4th Feb we left French Cay, Roatan behind. For the first half hour we were tossed around like a rocking horse as the waves and wind outside the cay were not as forecast! We were doing about 2.5k per hour which wasn’t good for a 36 mile journey which we hoped to complete in 7 hours. We decided to push on and see what happened and luckily things improved and we were able to up our speed to an average 4.5k thus making it to Guanaja by just after 3pm. But it was all motoring and still came with a bit of a battering so we were happy to have an early night.

As with the previous post, I have put waypoints for the Guanaja approach at the end of this entry because there is no up to date pilot for this island.

There is only one town on Guanaja and this is situated on Isla Bonacca. There are hundreds of houses squeezed onto this tiny island – many of them on stilts over the water. 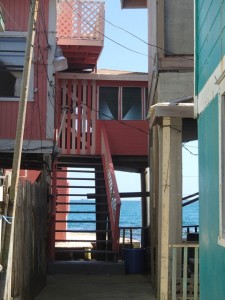 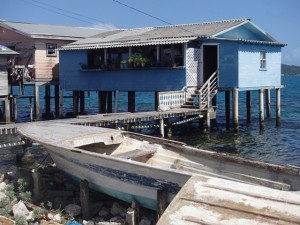 The reason why the settlement grew on the island rather than the mainland was because of the mosquitoes which plagued the large island. With modern control methods [and repellent] the mosquitoes aren’t the problem they used to be. Some people have now started to build properties on the mainland but most people continue to build, and rebuild, on the tiny islet. There are no roads wide enough for cars – this is the main street….. 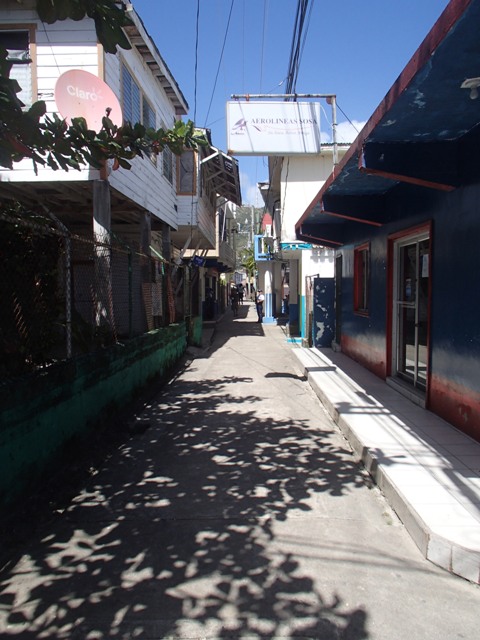 ….and the primary form of transport is lancha or canoe. The streets are intersected by canals… 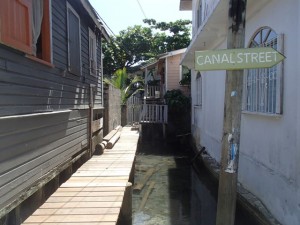 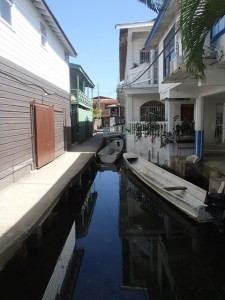 …and the whole place is delightful to visit….. 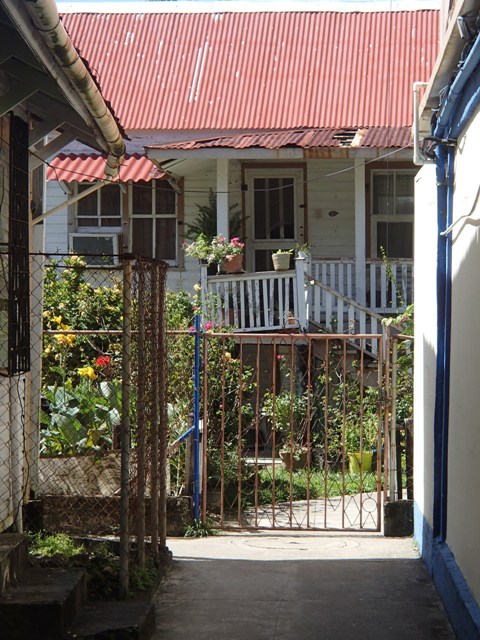 ….with even the small rubbish tip “decorated” by unusual flowers. 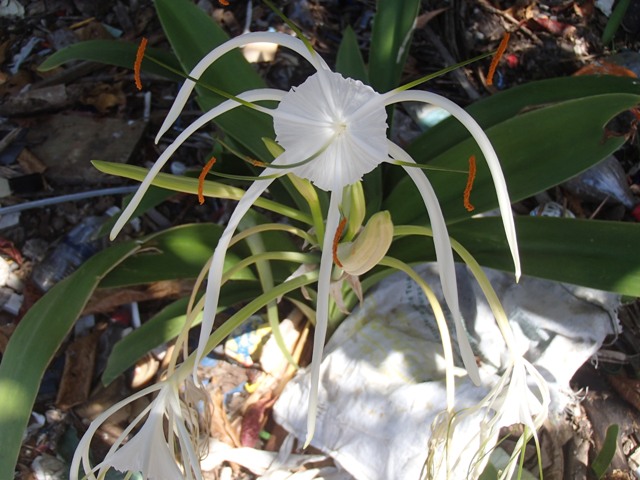 The islanders are very friendly and we were stopped a few times by locals wanting to know where we had come from etc. When we said the UK we were told that some islanders still have a UK passport and they recalled the visit to the island by Prince Phillip. We bought some lovely “squeaky” cheese [a bit like Greek Haloumi] and a fabulously fresh cauliflower. The Port Captain and the Immigration Officer were both polite and professional and we listened to the “ding” of the return as our Zarpe was prepared on an old typewriter.

It is possible to visit the other [North/West] side of the island. This, we found out later, can be done by yacht or it can be done by taking a guided hike across the mountain. It can also be done by dinghy from the anchorage, past Isla Bonacca and through the canal. We took this option and it provided us with an excellent day out.

On reaching the other side we found the pleasant little walking trail that we had been told about. 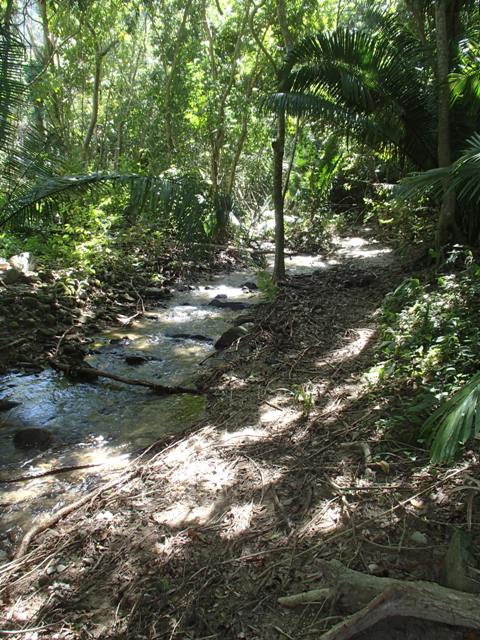 It was rather hard to find at first as the instructions we had been given said to keep to the right of the creek. Whilst this was correct once we were on the trail it was not quite so obvious at the entrance. 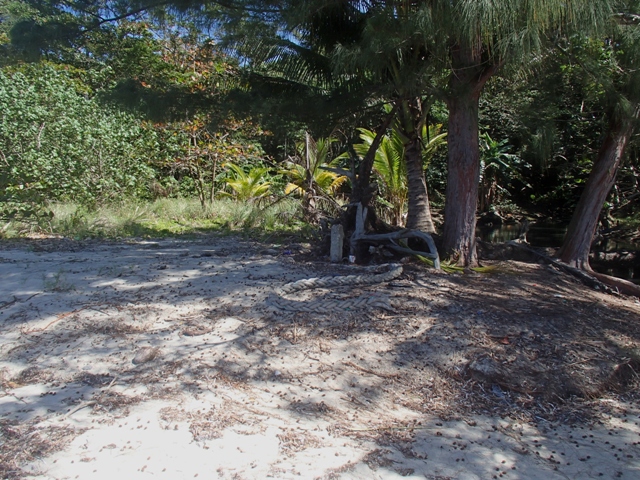 We wandered up for about 40 minutes at which point the trail again became somewhat obscure so we just waded up the stream to the top. The water was clear and cool – very pleasant. 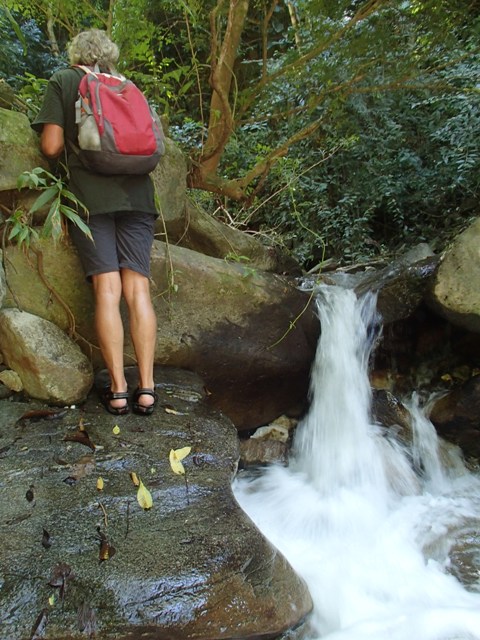 It was then time for lunch so we headed for the “Green Flash” bar and restaurant which sits out over sea. 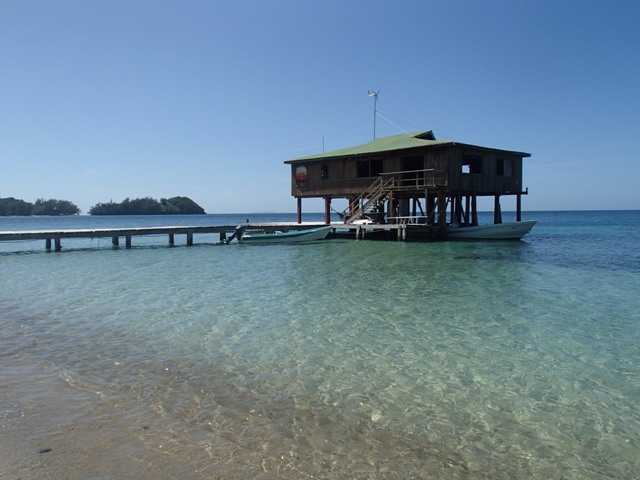 An excellent place for some cold beer and a fish lunch. 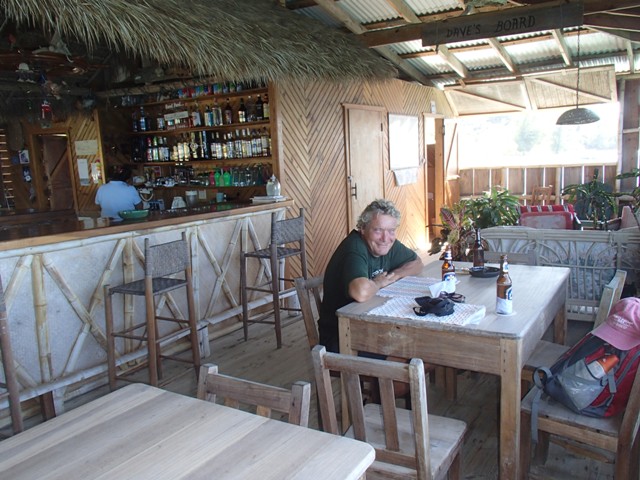 We found some beautiful beaches, one of which was the anchorage on the NW side… 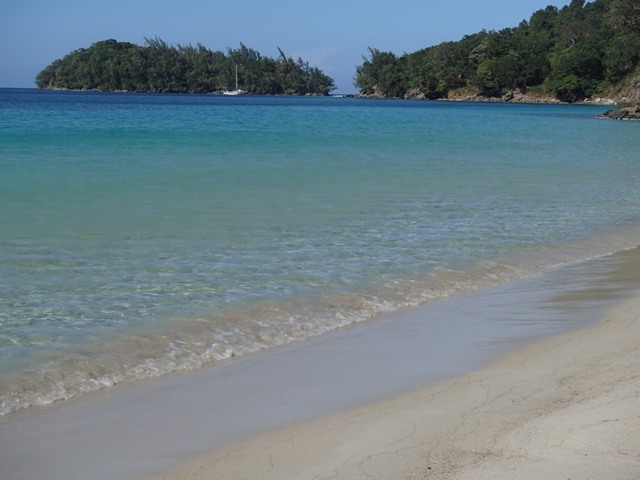 ….and had a swim. We also passed a small mooring ball which, had we had time, we could have attached ourselves to for what looked like quite good snorkelling – but we wanted to get back to our anchorage in good light.

The main anchorage itself is reasonably sheltered with good holding. 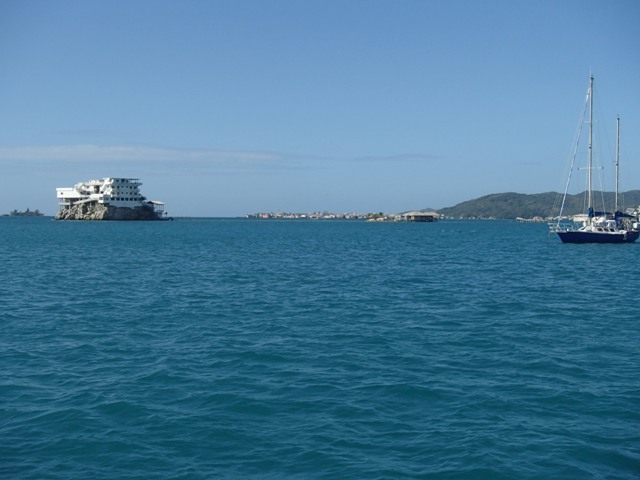 The hotel on Dunbar rock provides a good indicator of where to anchor – though it is important to follow the waypoints round it. Isla Bonacca is in the background.

A German couple manage a small bar called “Manati” which is on the main island adjacent to the yachts at anchor. 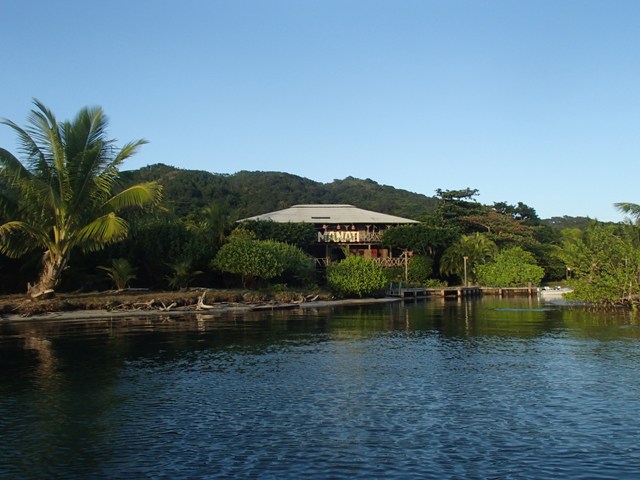 They cook Schnitzel, Bratwurst, Sauerkraut and other such delights and have REAL beer – which Mike really enjoyed…. 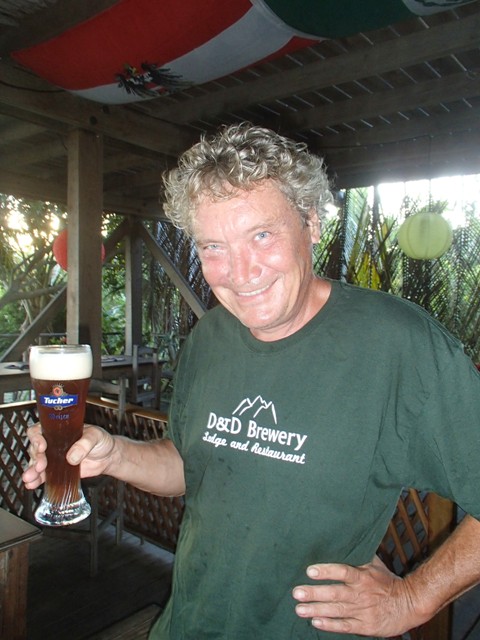 ….as did Sandra, who tucked in whilst Steve, Anton and Rita discussed the route we were going to take over the next three days. 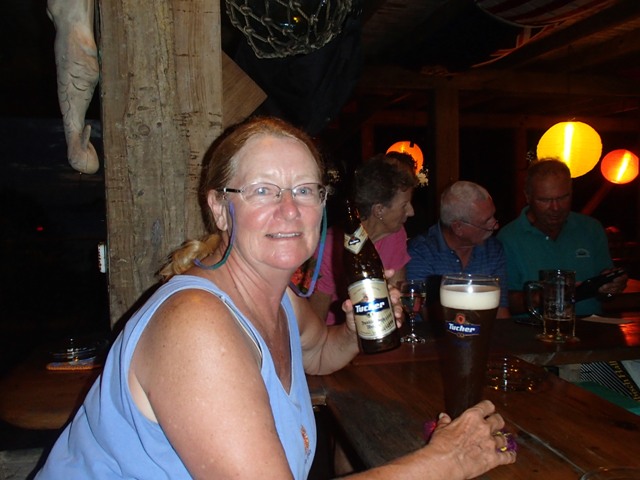 6.05am on Saturday 8th February saw us setting sail again. We saw a few squalls during the journey – but nothing to worry about. We had to motorsail for the first 24 hours – but after that it was excellent sailing…. 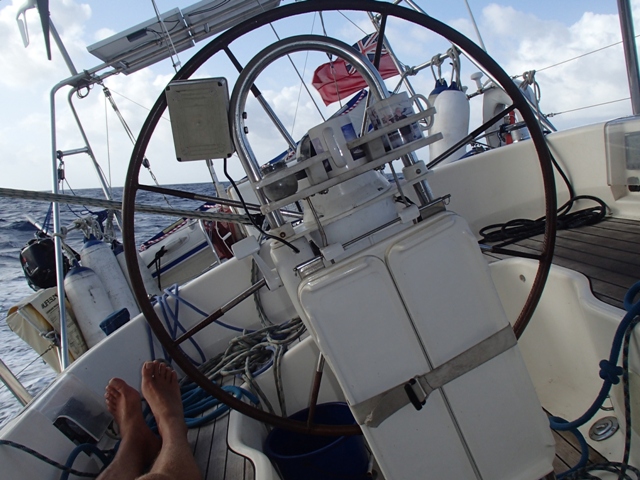 We had a couple of “interesting moments” – the first being when the alternator fell off [so much for Pedro the professional oil rig engineer!].  It was all because there was only one nut rather than a second locking nut and Mike managed to cobble a temporary fix which was a good job otherwise we would have had to turn back. The second “moment” was when the bilge pump stopped working. This was a fuse and was quickly diagnosed – and may not have been an issue at all had I not flooded the bilge when operating the water maker. NB Claire – take the stopper off the bottom end of the funnel before putting the pipe into it to fill the jerry can!

We managed the passage in just less than 60 hours – which meant we didn’t have to do a third night. We arrived just before dusk though there is a clear white lit seabuoy leading to a marked lit red and green channel – so we could have entered at night.

We anchored under Morgan’s Head just off Santa Catalina Island – a five minute dinghy ride to the main town dock, next to “Yonder” who arrived about 6 hours before us 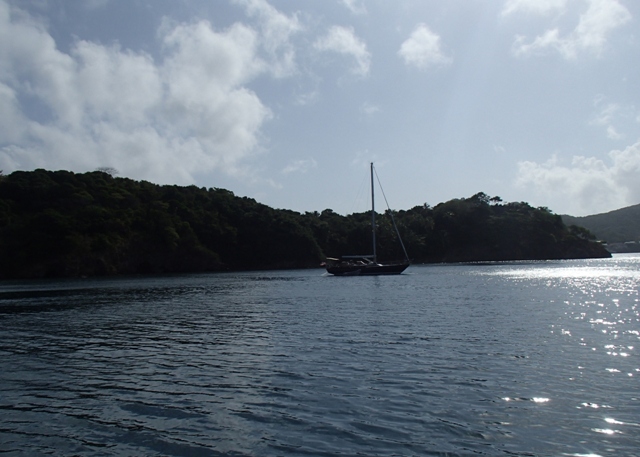 and we were followed about an hour later by “Albatross”.

So, here we are in Providencia , looking forward to sampling whatever delights it has to offer. But….wherever we are….

Permanent link to this article: https://www.sigasiga.co.uk/2014/02/23/roatan-to-providencia-via-guanaja/