It is quite possible that this blog post will have more photos than words. No doubt this will please some people [Hi Dave] but then again, when he considers the quality of the photos, perhaps not! Oh well, I do my best. 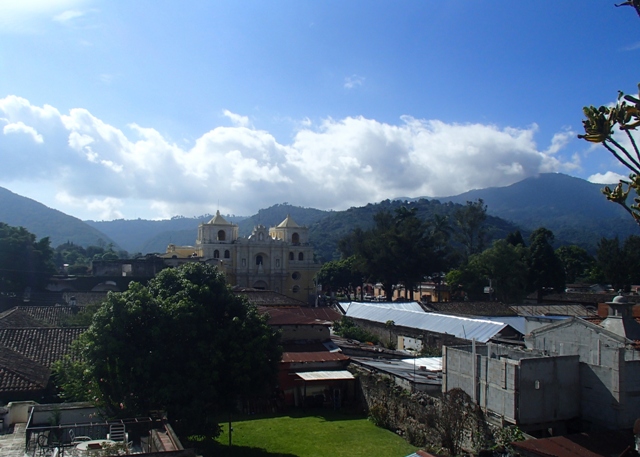 Now, the title of this entry might have made you think we have flown out of Guatemala and gone back to visit one of our earlier Eastern Caribbean island stops, but hopefully the photograph above will have made you think twice because this Antigua is the second largest city in Guatemala. It is a very beautiful, historic city which was once Guatemala’s capital – that is until several major earthquakes resulted in the government relocating to Guatemala City [which, as far as we could tell from passing through it on the bus is neither historic nor beautiful]. Earthquakes have damaged many of Antigua’s buildings… 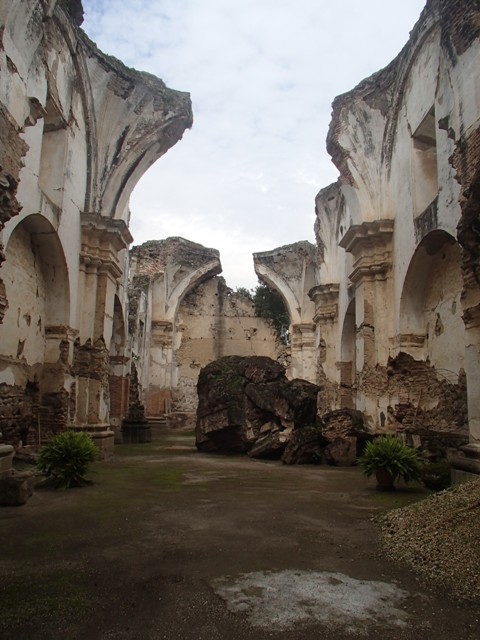 but some of the important ones, such as the “Cathedral de Santiago” were rebuilt time and time again…. 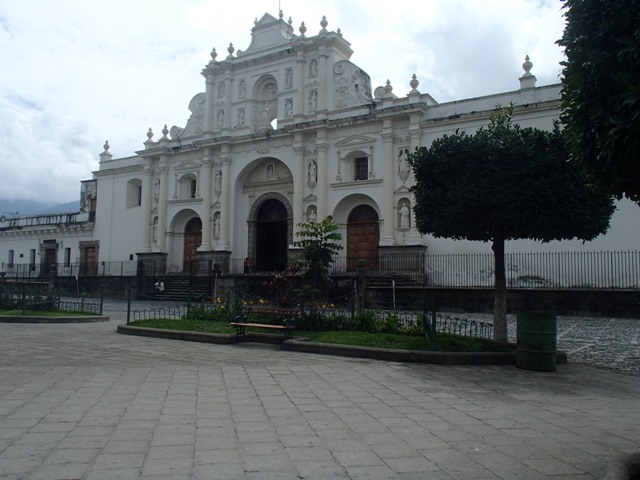 though they did lose some of  their lavish baroque style in the process. Fortunately “La Merced”, the city’s most striking colonial church was restored to its former glory…. 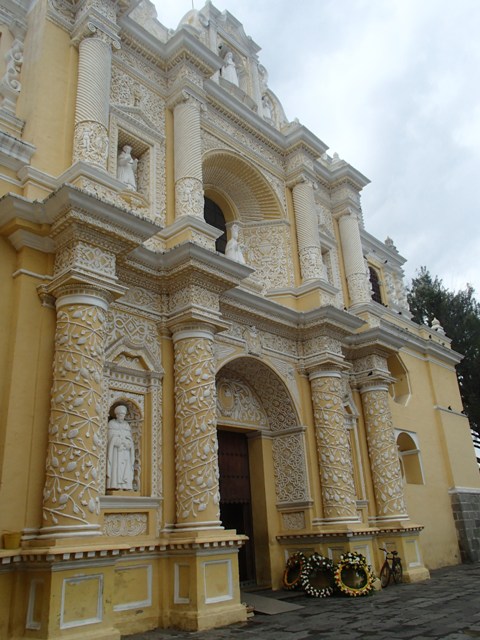 and is a major landmark by day and night. 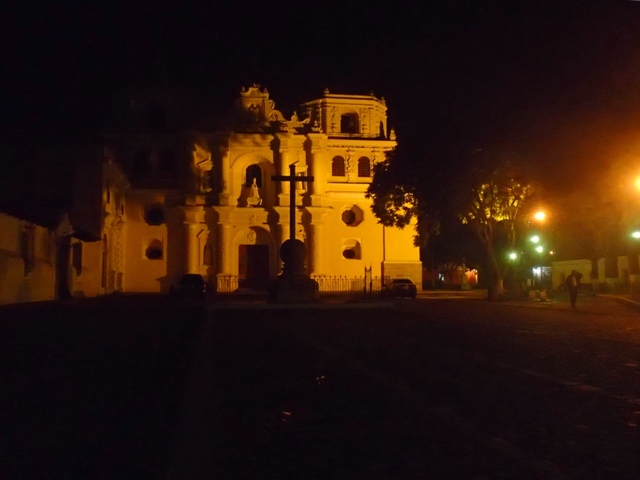 One of the things we noticed on the Cathedral doors was that the two knockers were well above head height. The explanation given for this was that most people arrived on horseback and didn’t want to have to dismount to knock. I am not sure how entry was gained if you weren’t on a horse but, fortunately, some other buildings catered for that…. 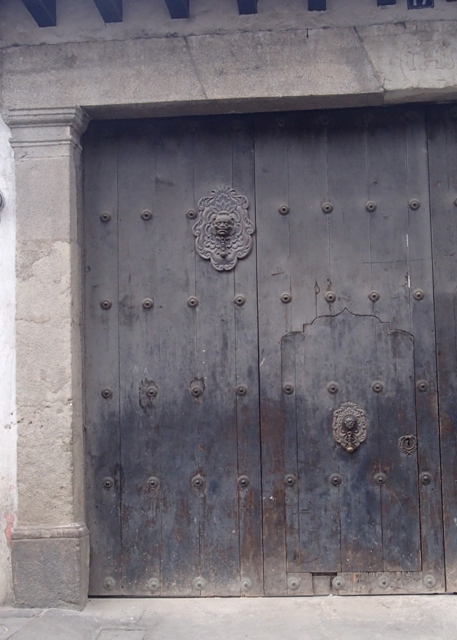 The city is located in the highlands of Guatemala at an elevation of 1500m [5,000ft] and lies in a kind of bowl between three volcanoes. 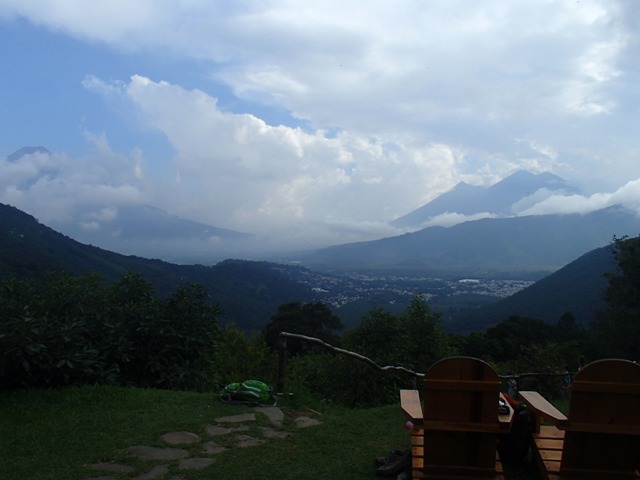 Volcán Agua is on the left of the photo, Fuego at the back right with twin peaked Acatenango overlooking it. Volcán Fuego [fire] is normally easily recognisable by its plume of smoke, except when the cloud base is too low! However, I did get another shot early the following morning from the roof terrace of our accommodation. 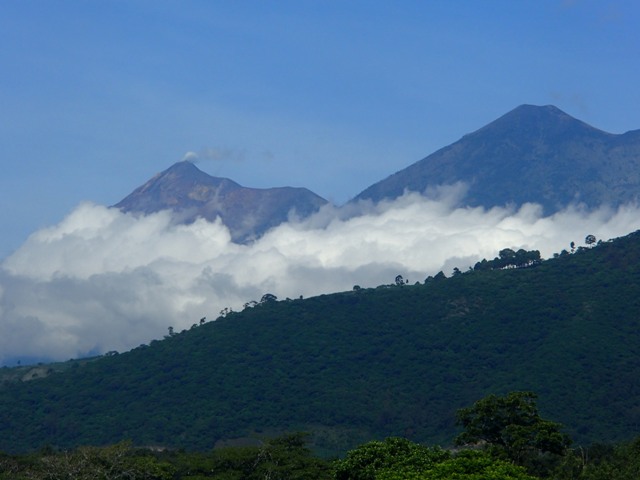 It is quite amazing to think of the city being at a higher altitude than anywhere in Britain [Ben Nevis 1,344m], though some seasoned traveller friends [like Big Steve, Mary and JT] will probably think that 1500m is nothing compared to what they have seen/been up.

Antigua’s cobbled streets are a riot of colour, particularly when the Artisan market traders set up their stalls 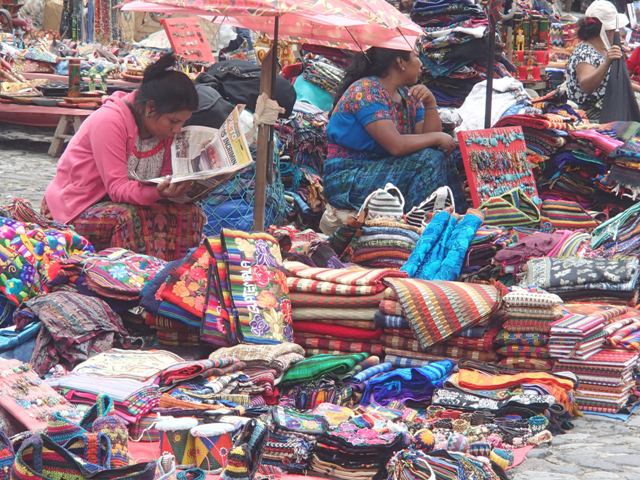 There is also a permanent indoor artisan market 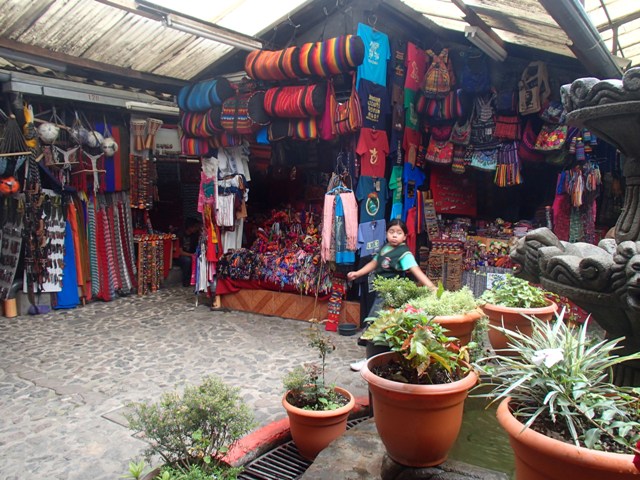 ….and next door is the bustling main “Mercado” [just like Bury market]. 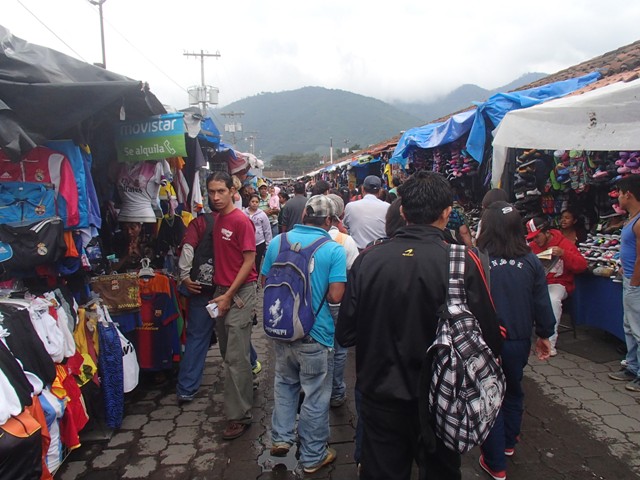 Of course, it is also possible to buy lovely fruit and vegetables from individual street vendors 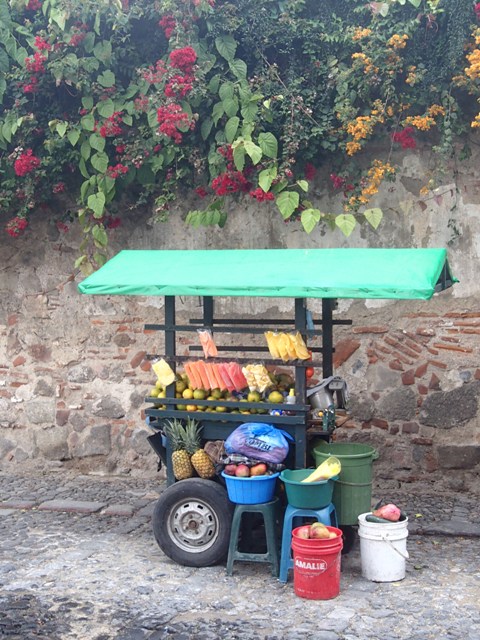 … and street food can be found on many a corner… 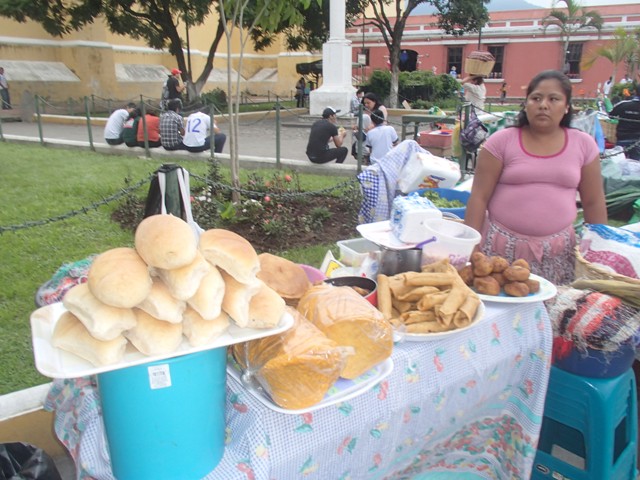 The “pasties” [just visible in the pink bowl] were excellent, which is more than I can say for the doughnut things [on the right side of the stall] which were kind of sloppy banana. Mike liked them….there is no accounting for taste!

One of the main streets which goes by the snappy name of 5a Avenida Norte is crossed by the “Arco de Santa Catalina”. Built in the 17th century, it originally connected the Santa Catalina convent to a school, allowing the cloistered nuns to pass from one building to the other without going out on the street. The clock was added in the 1830’s. 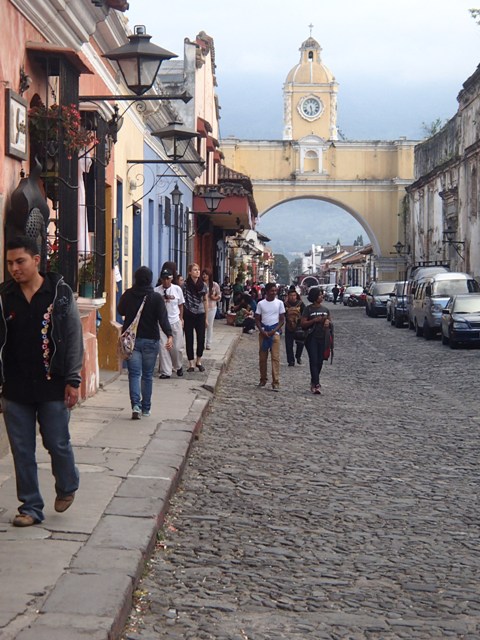 The street, like many others, leads to the Parque Central, 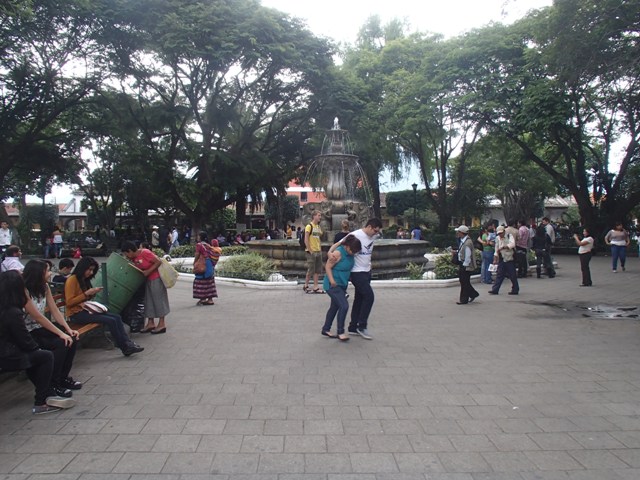 which is the gathering place for locals and visitors and which is surrounded by colonial buildings, their ground floors and courtyards now transformed into cafe’s.

As might be expected, Antigua has several museums. We visited the “Paseo de los Museos” [The Museum Promenade] which is a cultural route through what was the church and convent of Santo Domingo and the Santo Tomás de Aquino College. 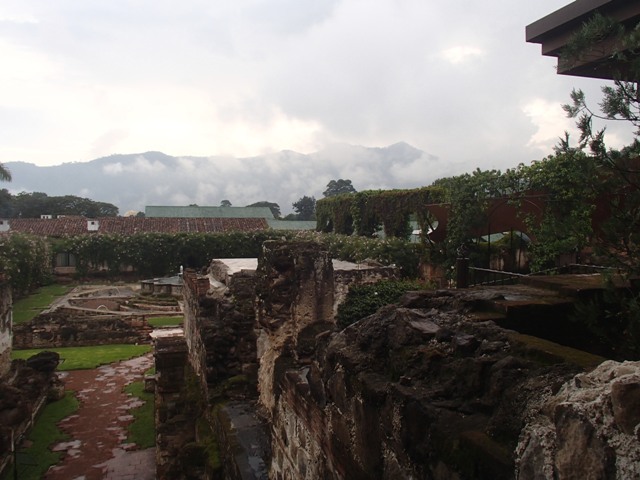 The route ends, or starts depending on how you approach it, at the Hotel Santo Domingo 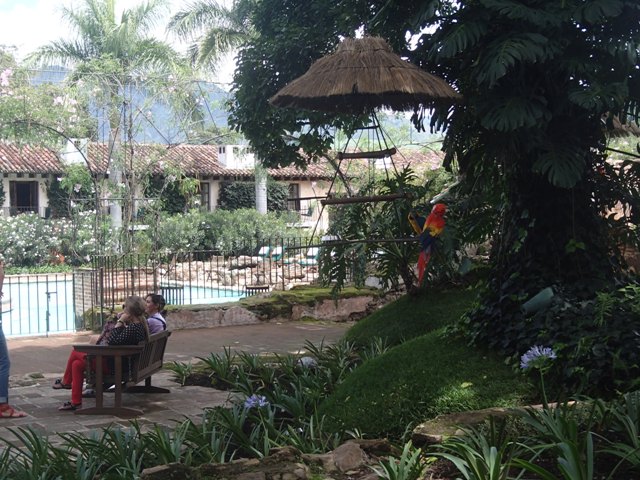 ….an annex of which, El Tenedor de Cerro, is a free bus ride away up in the hills overlooking the city. We spent a pleasant couple of hours there taking in the views…. 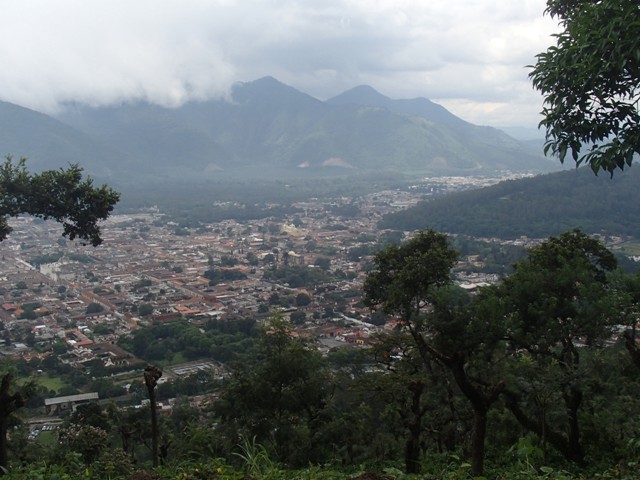 ….and looking at some wacky sculptures within the grounds. 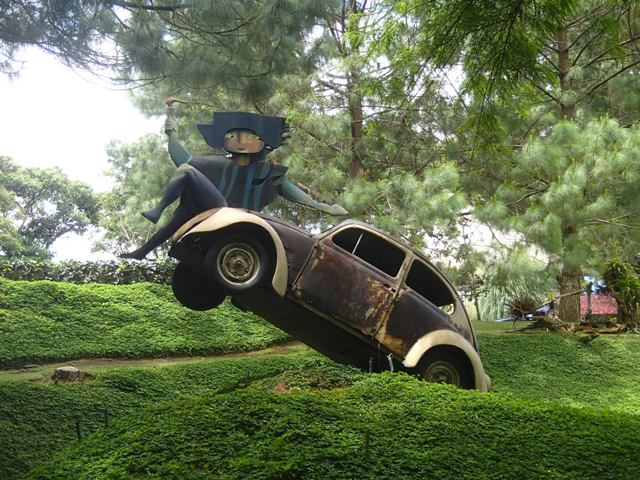 We also visited an Avocado farm, just outside the city, called the Earth Lodge. If you want to know more about it visit http://www.earthlodgeguatemala.com/index.html. It was an excellent place to spend Sunday lunch, quaffing a few beers [or delicious fruity rum punch in my case] admiring the views and eating some of the farm’s lovely Guacamole whilst being entertained by Alabama singer Eric Fry. 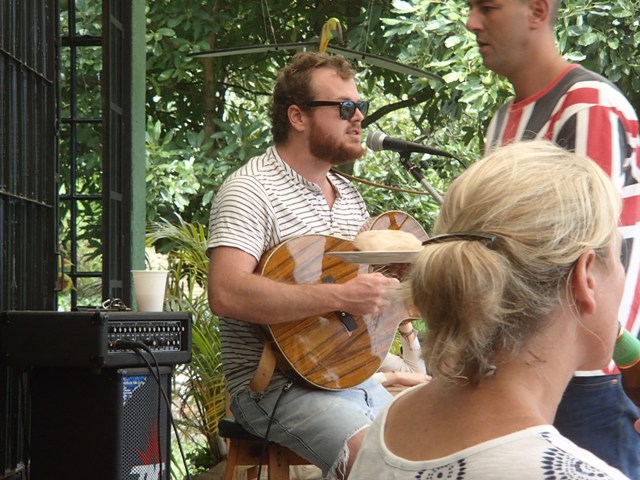 They have also produced a cookbook and one recipe rather took my eye. 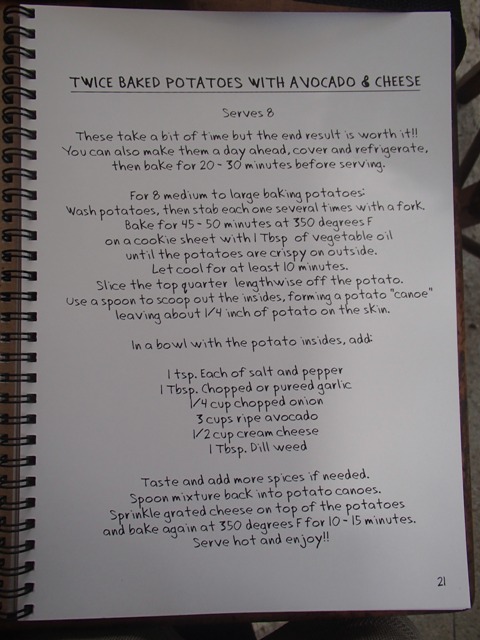 We have tried it out and it works on the BBQ as does a variation I invented with artichokes instead of avocado. So, anyone having a barbie in that lovely summer weather you seem to be having in the UK – give it a try. [If its now raining there I am sure the conventional oven is good too!].

Sunday’s are always good days to be out and about in towns and cities, watching the locals laze their days away… 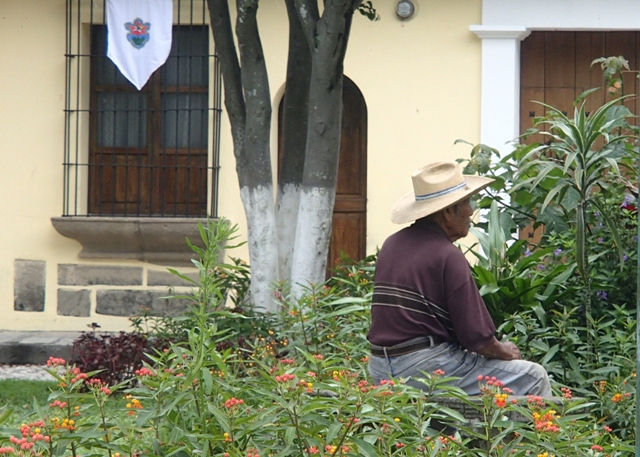 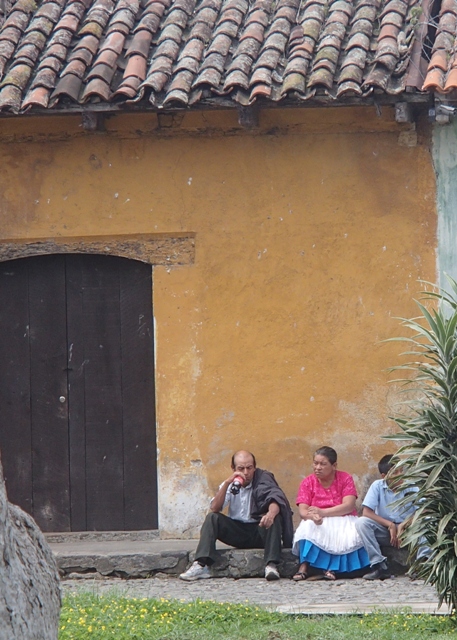 before or after going to church 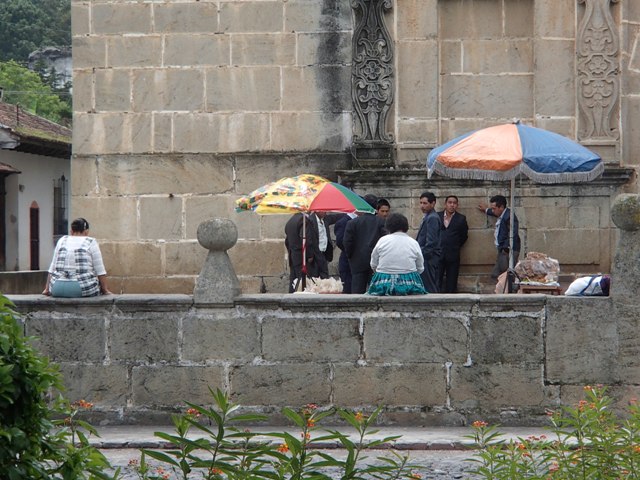 or to the food stalls just outside the” Inglesia de San Fransisco”. 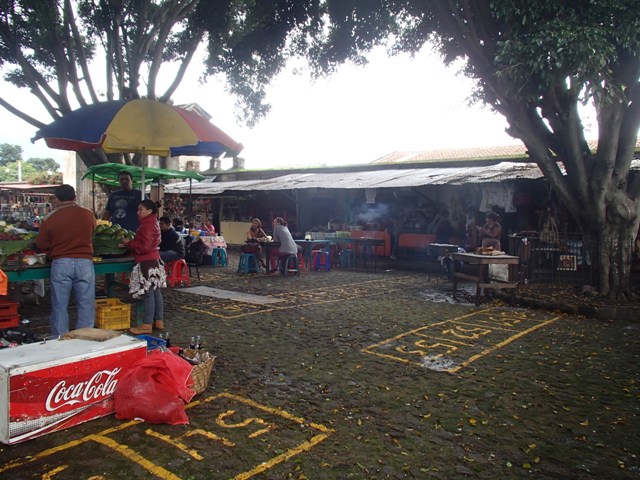 The church of Saint Francis dates from the mid C16, but little of the old buildings remain…. 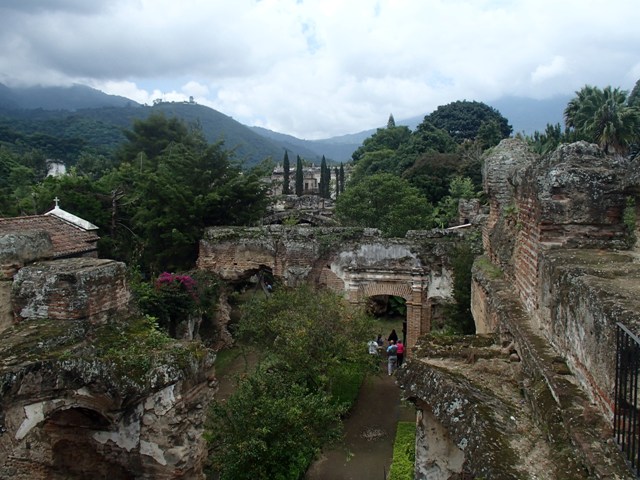 All that is left of the original church is the resting place of Hermano Pedro de San José Betancourt, a Franciscan monk who travelled to Guatemala from his home in Tenerife, founded a hospital, earned the gratitude of the poor, died in 1667 and was beatified in 2002. 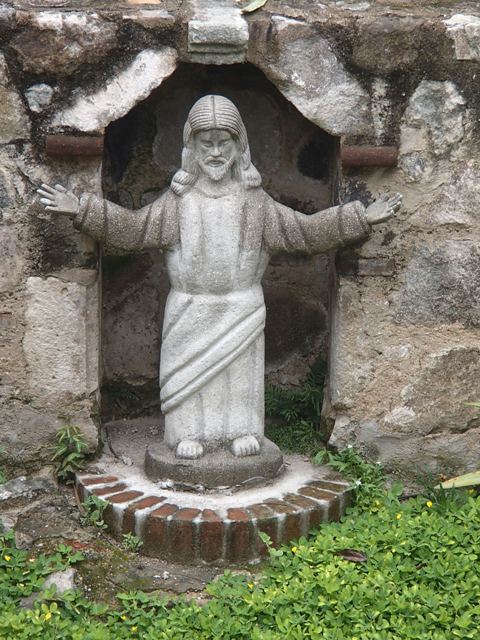 Perhaps one [or should I say several] of the better known sights in Antigua, indeed in all of Guatemala, are the local buses which are known as “chicken buses”. 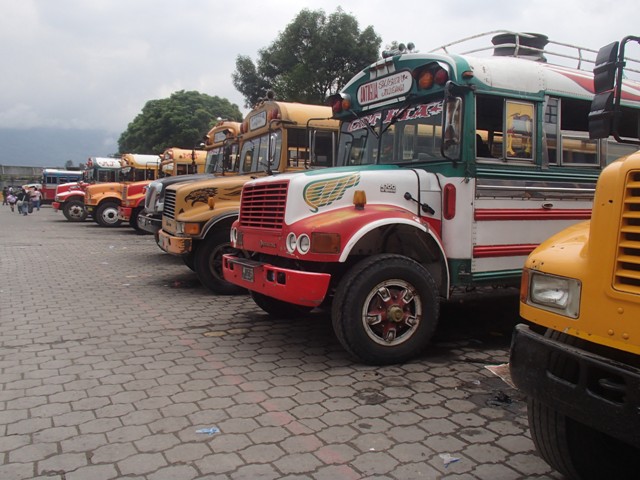 We have yet to try one of these as we didn’t fancy making the seven hour journey from Rio Dulce on one. We will leave that experience for a shorter trip – though our “Pullman” bus which was, most assuredly, more comfortable was in itself quite an experience due to the showing of three awful American films, dubbed into Spanish with Spanish subtitles as well??

And so, that concludes our few days in Antigua except that I must tell you about Mike’s favourite part of the whole trip when he went to take a photo of some ladies selling trinkets. As is polite [and in many places the only way to do it] he asked if he could take their picture. They agreed, subject to him buying a necklace. They agreed a price and then debated about which one I would like. Mike then had to come and get me from across the street, have me choose a necklace, and part with the grand sum of Q40 [£3.30].

I think you will agree that the photo was worth it…. the jury is still out on the necklace though I did wear it for the rest of that weekend. 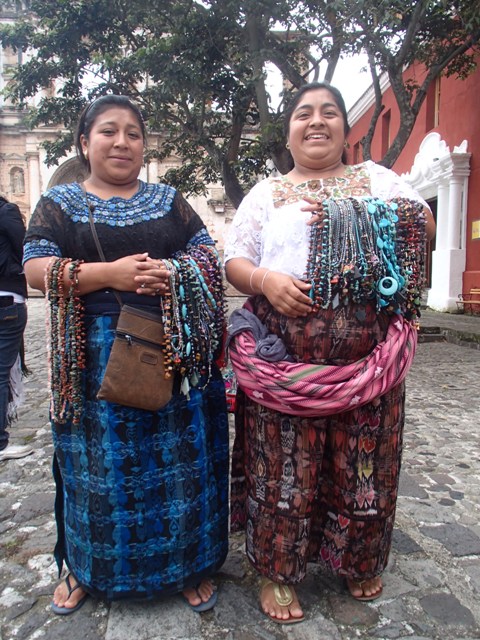