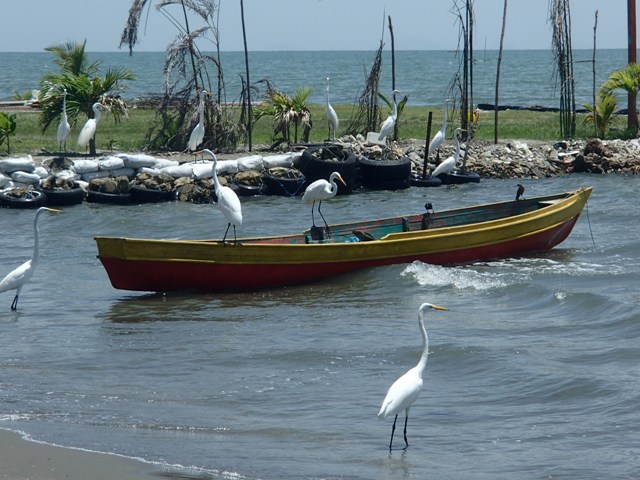 I know that at the end of my last blog entry I wrote that we were on our way to the Rio Dulce – this being our next stop after Belize. However, I can’t remember whether I told you that Rio Dulce [translated as the “Sweet River”] is in Guatemala and is where we are going to stay for this year’s hurricane season.

The entrance to the Rio is at Livingston which lies about half way down the small Bay of Honduras and, for many boats, access to the river has to be timed rather carefully because of the sand bar which has a controlling depth of five feet six inches across the river mouth at mean low water. With higher tides, up to an additional eighteen inches is available and as we were travelling with “Matador” and “Beatrice” [both boats having a deeper keel than ours] many a conversation took place about the best date and the best time for the crossing because if one window passes [which lasts for three to four days of tides] then it is usually about two weeks before the next opportunity comes around.

10th June was chosen both for the amount of tide and also the time of high tide because the crossing really needs to be done in daylight i.e. after 6am but also ideally before noon to allow time for clearance in to the country having arrived there. So, the 8.30am high tide on this day was ideal. Both Beatrice and Matador felt their keels slide along the muddy bottom in a couple of places but we all anchored safely and without mishap. 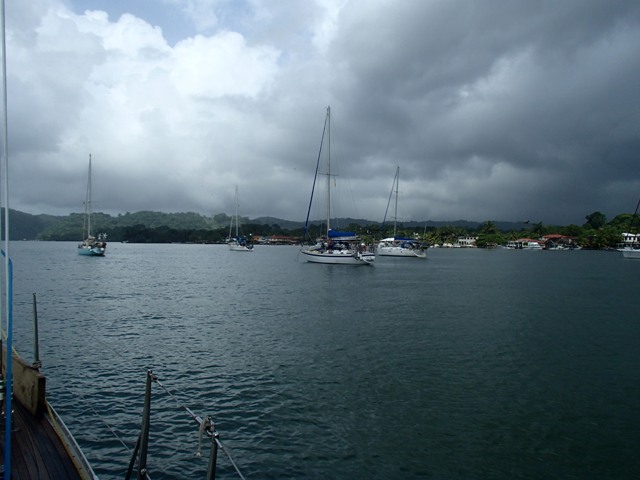 It was only about an hour after we had anchored that we looked around and saw another boat which hadn’t been quite so lucky and had obviously stuck. The locals are used to this happening and, for a modest US$50 fee, have developed a way of tilting the boat and guiding it across… 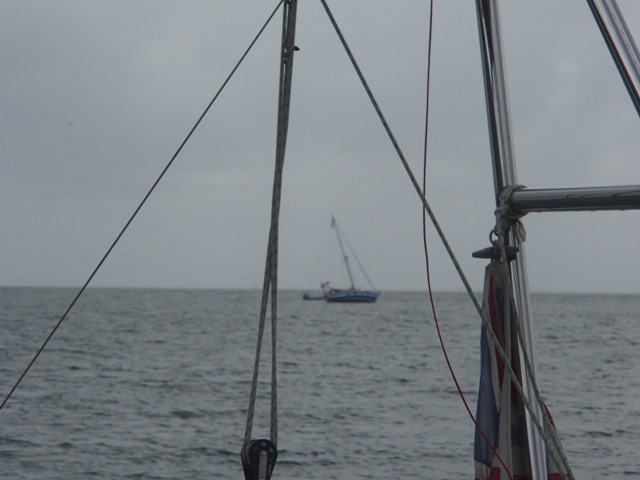 Well, we think its US$50. We know it is if you book it in advance, which some cruisers do, but if you are already “captive” then maybe the price goes up?

The German couple in the “tilted” boat above really didn’t have a good morning. After being released by their rescuers they motored round in front of us and started to drop their anchor but the windlass stuck. The poor harassed woman was trying desperately to free it manually and her husband failed to notice that by the time the anchor was actually dropping they had drifted rather close to us. However, because we weren’t staying long and they weren’t actually sitting on our bow we decided not to bother them further and ask them to move again.

But, at least they dropped their anchor…. something that the catamaran which followed them over the bar failed to do! Having finished watching the goings on on our port side, I faced the opposite way and noticed that the newly arrived Catana [loadsa money] was drifting sideways back towards the bar with no-one on deck but with the anchor still firmly attached to it. I tried to call it up on the radio but had to resort to the fog horn to attract their attention. Two guys popped out of the cabin to see what the fuss was about and walked to the front to check their chain….the look on their faces when they realised they had forgotten to drop the hook was really quite amusing.

Anyway we availed ourselves of Raul’s services – using an agent seemingly being the most efficient/effective way of entering Guatemala – and by 10.30am we were free to wander the streets of Livingston to stock up on provisions and to enjoy the local Garífuna speciality – “Tapado”. 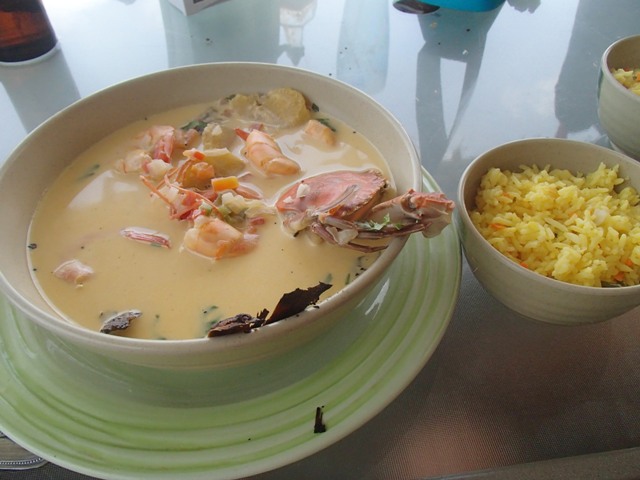 We had heard about this amazing seafood soup through Maggie who told us that Jenny [Dave and Mag’s daughter – for those of you who don’t know] had raved about it when she visited here a couple of years ago and we were really pleased we had followed her recommendation – though the Thai prawns which Stu and Steph had were equally delicious. 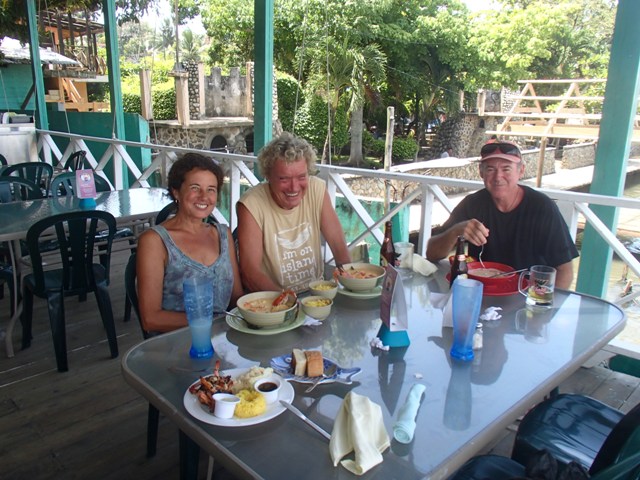 The Garífuna descended from Caribbean islanders and shipwrecked African slaves and the few thousand of them living in Guatemala are found mainly in and around Livingston. We chatted to one guy who told us that there were two sides to Livingston town – the Garífuna side and the Mayan side and it was fairly clear that he felt that the two cultures remained separate. Unfortunately, we weren’t particularly inspired by either side of the town – the most interesting sight during our wander around being the birds [in the photo at the top of this blog post].

The Rio Dulce, on the other hand, is very inspiring. 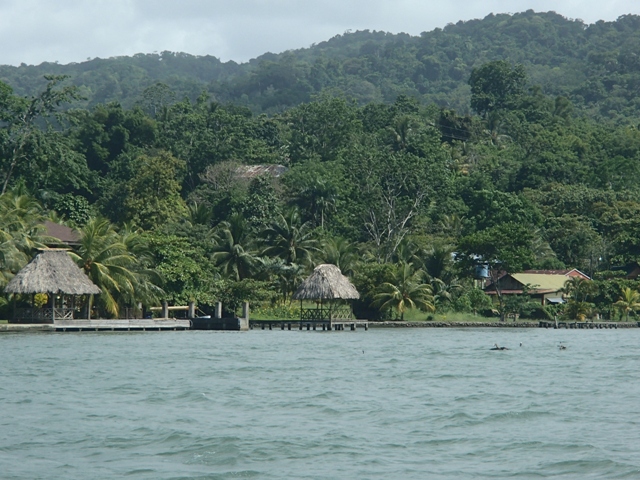 None of my photographs really capture the spectacular gorge with 300 ft towering cliffs which winds its way for 6 miles to El Gofete, the first lake on the river and our first port of call. All along the journey – which took us about 2 hours – we passed children paddling canoes back from school, fishermen throwing their nets whilst balancing in their canoes and “lanchas” which are a kind of local water taxi service and we listened to the abundant bird life high in the treetops. We hoped that some of the sounds we were hearing were the “howler monkeys” but we were later told that we will have to wait until we visit the mountain regions to find these and that the main sounds on the lower river, other than birds, are the thousands of frogs which set up a chorus at dusk every day.

Although we have booked a berth for the season near the town of Rio Dulce we decided to break the journey and spend some time anchored off the small village of Cayo Quemado at Burnt Key Marina. 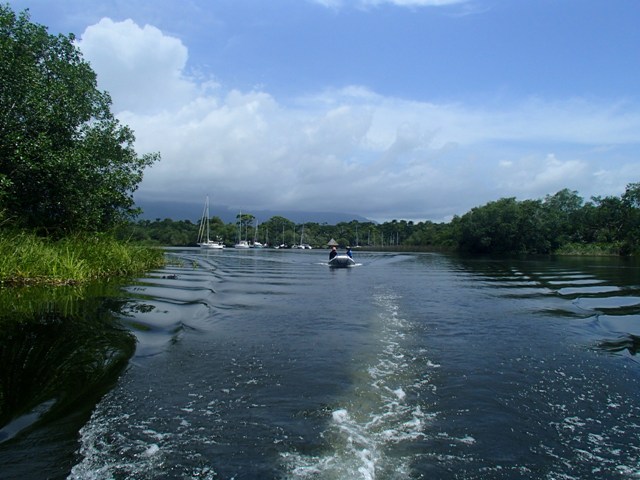 We opted not to take a marina berth here because we had plenty of water on board, the electricity supply is not compatible with our system and anchoring in the beautiful sheltered inner lagoon afforded us a little more breeze than being next to the shore. The owner, Mavis, and her staff were extremely welcoming and we spent some pleasant early evenings chewing the cud with various ex-pats from the US, Canada, Australia and NZ. The villagers are also extremely friendly and we bought fresh fruit from this travelling shop…. 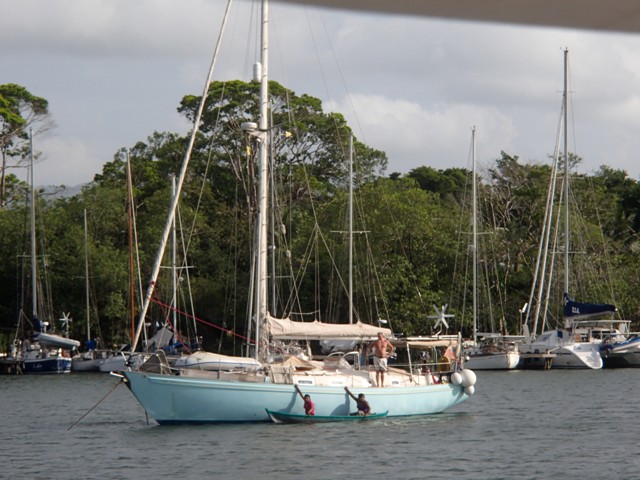 and also visited some of the riverside Tiendas [stores]…. 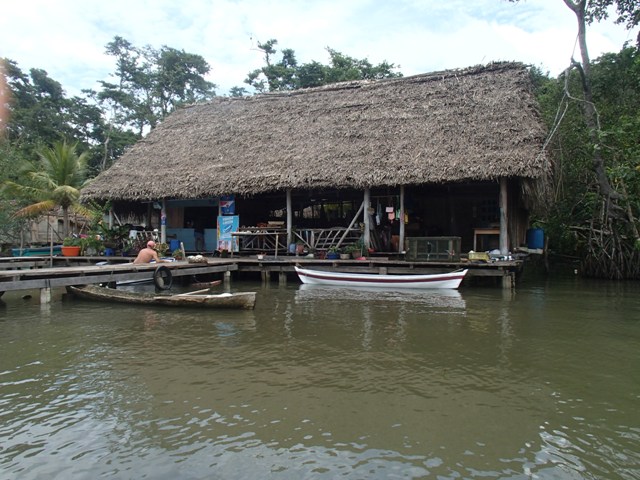 We stayed at Burnt Key for 10 days and took some lazy dinghy trips around the lagoon waterways…. 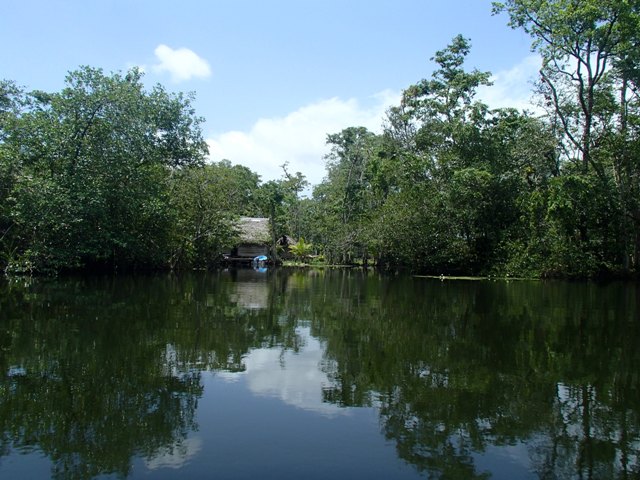 up the Rio Lampara….. 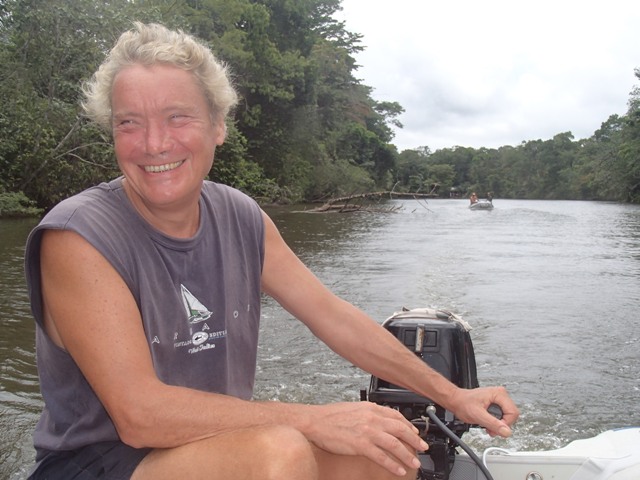 and visited the restaurant Aqua Caliente named for the hot springs which bubble up from underground making the edge of the river really hot. 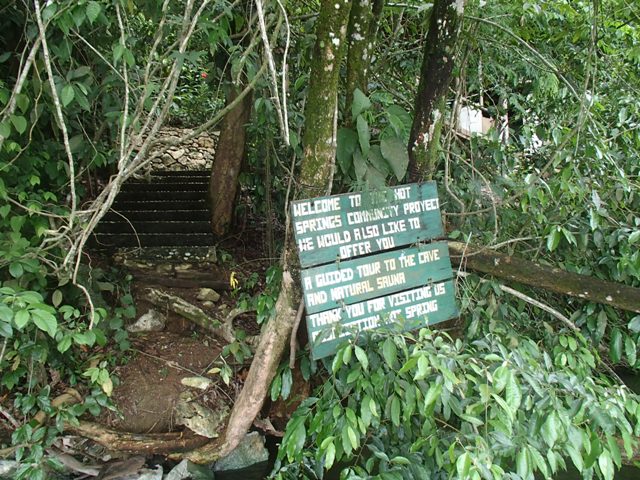 What the water temperature is like underground I dread to think – we didn’t actually go on the trip to the sauna, after all the weather here means that we are already living in one!

We have had some amazing storms on several evenings/nights with spectacular lightening displays and thunderclaps which shake the boat. When it rains, it certainly rains – which is what one would expect when living in a tropical rainforest 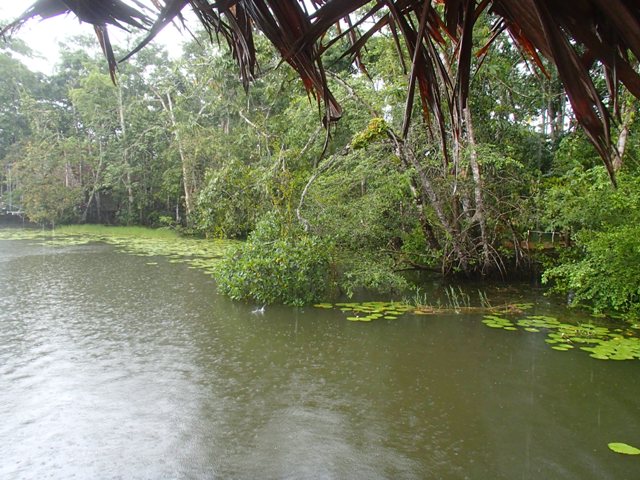 We were introduced to the local lady who runs the “laundrette” and the washing we took to her came back cleaner than we have had from any machine. 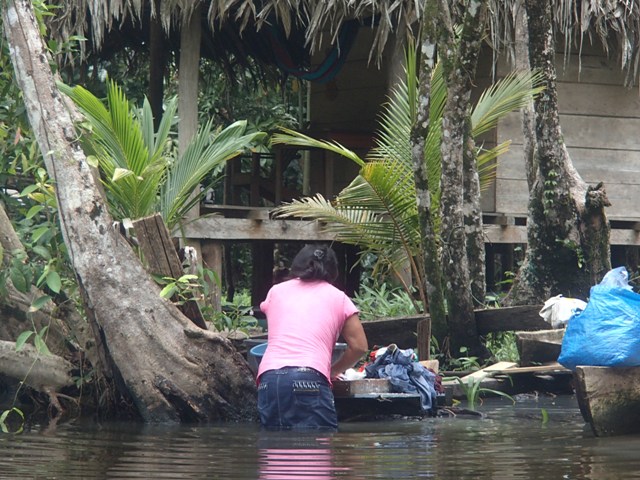 She even returned our laundry bag [a canvas hold all] in pristine condition and charged us just £6.50 [Q80] for two large loads washed, dried and folded. Yes, we have to get used to another currency – the Guatemalan Quetzal. It’s actually much easier to use than the US dollar because, as with European currency, the notes come in different sizes and colours which certainly helps after a night out with “Happy Hour” beer at 7Q [55p] or double Rum and Coke for 14Q [£1.10].

Speaking of beer – Mike has recently enjoyed a real pint. OK – it probably wasn’t quite” Landlord” standard but it is brewed by a guy from the East End of London [John] who, with his Dutch partner runs the Roundhouse backpackers hostel just down the river from Burnt Key. We had hoped to get a meal there as we had heard great things about the Sunday BBQ. Suppose it serves us right for going on a Thursday but there was no food available. Still we had some great conversation and a few laughs. 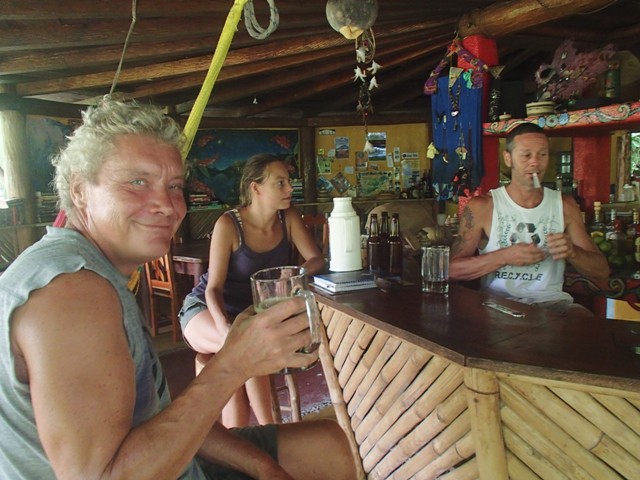 So, 21st June arrived and we were on the move again. We chose a very interesting day to leave – i.e. the wind was blowing down the lake straight onto Siga Siga’s nose [which it never does] and we had a rainstorm which lasted about half an hour rendering us practically blind which isn’t that good when you are somewhere you haven’t been before with no charts, lots of fisherman’s nets and large logs floating downstream. Fortunately the skies cleared and we completed our three hour run up to Rio Dulce without hitting anything.

There are about ten marinas at or near the town of Rio Dulce which also seems to be known, interchangeably, as Fronteras. The marina at Hacienda Tijax [which you can look at on their website] was recommended to us by Larry and Marlo [Beatrice] who stayed here last year. Its the first marina we have ever visited which offers a welcome drink, provides detailed written information about shopping, security, water treatment, etc, provides a free “lancha” to the town whenever we want it up to about 10pm at night and has created a cruisers lounge, with BBQ, for our use where we can drink our own booze and an excellent swimming pool to keep us cool. First impressions are certainly very favourable….. 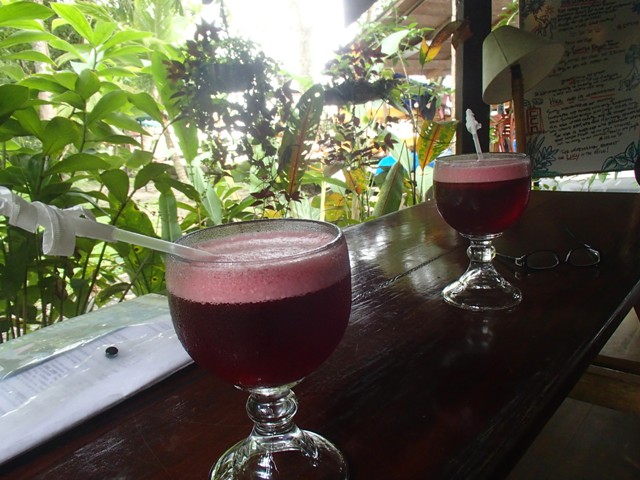 …..we have had a great start to our stay in the Rio [and if anyone wants to visit there are small cabins to rent if you don’t fancy life afloat!]

Permanent link to this article: https://www.sigasiga.co.uk/2013/07/09/welcome-to-the-beautiful-rio-dulce/