The Tropic of Cancer and other tales of passage

We departed San Sebastian on Tuesday 15th November in true Siga Siga fashion – i.e. there were “complications”. We had said “Cheerio” to Martaan and Marieanna earlier in the morning and at 1pm joked with the people on the Dutch boat berthed opposite us, who were leaving on the same day but at 4pm, that we would see them in Palmeira, Sal but that we expected they would overtake us. What we had forgotten was that the fuel berthed closed at 1pm, not to open again until 4pm, so their overtaking us was not exactly going to be a strenuous matter. What was worse, when the fuel berth did open it had no fuel – but the attendant forgot that little matter until he had given us about 30 litres of “dregs”. We then had the choice of waiting until “Mañana” – and you know what that means, or of emptying our two spare 20 and 25 litre jerry cans into the tank and then taking them, and one from the attendant, to the garage across the ferry car park. We opted for the latter and it was quite a sight to see Mike wheeling a barrow with three large, full cans on it down between the rows of cars and coaches waiting to board. Fortunately we didn’t actually need too much fuel and that one trip was sufficient. We were also excused payment of the fuel dregs which saved about  though the repercussions may yet bite?

But that was not all. On leaving our berth to motor for fuel we found that our bow thruster wasn’t working. We couldn’t understand why as it had been when we last berthed. So, whilst waiting for the fuel berth to open, Mike set too with the trusty tool kit and we think that the problem was caused by some kind of sea creature which leaves crusty worm trails. Our reason for surmising this is because the speed transducer was mucked up with them and took some unclogging and Mike thinks that the deposit was likely to have been sufficient to have caused the bow thrusters to stick and break the shear pin. Well, it was either that or perhaps a twig or something but generally the marina was very clean with no signs of debris so the worm thing is our best guess.

The third issue was that the wind speed/direction indicator appeared not to be working. However we decided that we were fine without this because, having checked the wiring in the control panel and below the mast we could only think that the problem had to lie at the top of the mast – the wires perhaps having been disturbed when Mike fitted the LED up there. It was not the right time to start climbing the mast. This did, in fact, turn out to be the right decision because at a later date [following arrival in Cape Verde] it started to work again. You know the old favourite about “turn the computer off and then on again!!!”

Anyway, after all that excitement we finally got underway just after 5pm.

The passage of 746 miles took us just over 140 hours [6 nights and days], 107 of those sailing with an overall average speed of 5.3 knots. There isn’t really much one can say about the journey – which is perhaps a good thing because, as you know, all the earlier entries about our journeys have been about one hitch or another and as you have read above, we had had quite enough of that before we even got out of the marina.

We had quite a slow start with the wind at best a Force 3 and often just Force 2. We should have probably turned on the engine during this period but, so early into the journey, there was a determination to sail – and to save fuel.  However, when we only covered 2 miles in a period of approx 45 minutes we decided enough was enough and we then motored through our second night. This had the added benefit of enabling us [mainly me] to sleep as the engine is far more soothing than the clanging of the boom and the cracking noise made by the sails when there is little wind.

8am the following morning and there was more wind, the engine went off and we spent the next three and a half days completely under sail. At first we had the asymmetric out [for about six hours], but after that it was all genoa. When the Trade Winds do what they are supposed to and push steadily from behind it really works well.

One of the things we did quite a lot of was reading. One of our books described a sea passage which the main character had made across the Tropic of Cancer. In that story there was a big thing made of this crossing – all about someone getting dressed up as Neptune and all the crew being dunked in sea water and then given half a pint of rum. We actually thought that it was the equator when this kind of ceremony took place but as the rest of the book seemed to be well researched who are we to say any different? So, though we didn’t go for the sea water dunking – and we didn’t actually go for the half pint of rum each either – we did have a small G&T – and, readers, just like our last long passage that was about the only alcohol intake [well for me it was – Mike did have a glass of wine with our main meals]. 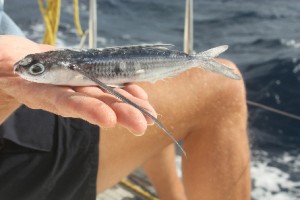 It would be great to be able to report about lots of dolphins or whales etc – but not a one. What we did have though, from about half way onwards, were shoals and shoals of flying fish. When I saw the first ones I thought they must be birds given the distance they travelled but, we have since read our “Fish of the Atlantic” wedding present  which tells us that “they skull violently with their tails, spread their pectoral fins” and that flight speeds of 35 mph and glide times of 13 seconds have been recorded. The book also tells of them flying through open portholes. Fortunately none actually came through any hatches but we did find one fish which had landed on deck sometime during the night. The only good thing about this is that it enabled me to take a photograph – catching one in flight would be practically impossible I think.

Talking of Portholes reminds me that on our last night we could practically see the knobs on the doors of a cruise ship which came rather too close for our liking. I was on watch and saw something which I knew was large when it appeared over the horizon to our stern as there was so much white light. I watched it for over an hour and initially thought that it was going to pass to port but, as it came closer I realised that I could see both red and green lights. Hmmm – not good I thought, particularly as there was no deviation and the red and green were getting nearer. I knew I shouldn’t change course because theoretically “he” should have had us on the radar and be making the move to pass us safely and my changing course could cause confusion. So, I am afraid I went and got Mike up. We tossed up between calling the ship on the VHF or shining the torch up the sail and decided that the latter was the fastest. Mike was ready with the VHF but, the torch trick worked, and the ship changed course. We were then treated to a flashing light from the side of his bridge. Whether this was a “Yes, we knew you were there” or a “Now we know you are there” or an “Oops Sorry” we have no idea but the fairy cake of a boat [so called because of all the lighting] was only about 100metres off our starboard quarter as it passed. We thought this was particularly stupid when there were hundreds of miles of ocean all around us with nothing else in it! 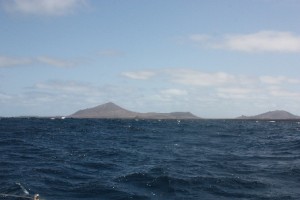 And so, “Land Ahoy” was announced at 8am on Monday 21st November and we anchored in Palmeira at 3.15pm [GMT]. It was actually 2.15 Cape Verde time but we started the passage in GMT and remained on that time in the log throughout. 2.15pm meant we were in good time to go ashore and complete all the entry paperwork – well in theory it did….. but there is another story – for next time….

Oh – and by the way, the Dutch boat was there – and had been for 24hours!! Never mind. We may live up to our Greek name but slow ‘n sure suits us fine.

Permanent link to this article: https://www.sigasiga.co.uk/2011/11/30/the-tropic-of-cancer-and-other-tales-of-passage/