Having said at the end of my last post that we were about to leave Fisterra we ended up staying another night because we had so much fun [I jest] with trying to access the internet that it was 7.30pm by the time we got back to the boat by which stage we decided to stay put! So, it was Friday 8th July when we moved – a very misty, rather “Lancashire” day with wind against us again so it was motor on for just over 3 hours until we reached our new destination of Muros – and what a place this is – fabulous.

But first, just to backtrack a little – I forgot in my last blog to report that when we berthed at Muxia it was me driving! Now, to most people reading this it is probably not a particularly significant piece of news but there may be some out there who are hopefully pleased that I have taken the plunge. Clearly, I have steered the boat before, and anchored etc – but never parked her on a pontoon. What’s more I was sufficiently good at it that Mike was able to step off onto the pontoon with ease. I have to confess it was a hammerhead and not a finger pontoon, and there wasn’t exactly a raging gale – but there was an angle to the approach and everyone has to start somewhere. For those who may be thinking about sailing the rias, Muxia marina is just a set of unused pontoons. Well, not exactly unused as a few locals have boats here, but not commercially used. Its such a shame because they are good berths and have electricity and water supplies set up but, having been built – with European money she notes cynically, they just aren’t used. There appear to be one or two of these dotted about – not just in Muxia. The seagulls clearly like them though as denoted by the residue and pong. 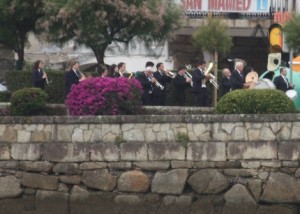 Anyway – back to Muros. Having anchored mid afternoon we were idling around sorting things out when I heard a brass band. We thought that they were practicing for something as we knew there was a festival 16/17 July. They wandered off and we thought that was that. However, at about 6.30pm, when Mike was doing early preparations for our meal, a maroon went off on the harbour. We thought it must be for the lifeboat and, even when followed by two more, we still thought nothing of it…. until smaller rockets went off and then more maroons and we realised it was the signal for something more, particularly as we could now hear a folk band playing in the town. 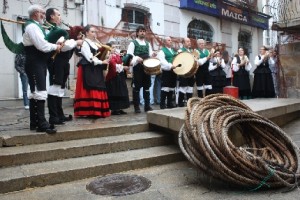 The something more turned out to be a kind of joint event. The Festival de Virgin de Carmen is, indeed, on 16 and 17 July but there is a “procession” held the week before. A procession is not the kind of parade we know – it actually means a “walkabout” of people. It seems like the whole town comes out and the women, and a few men, are dressed in a traditional costume – the children following suit in very cute fashion. 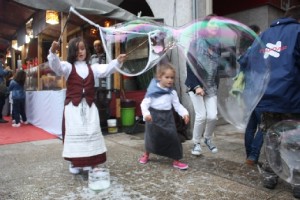 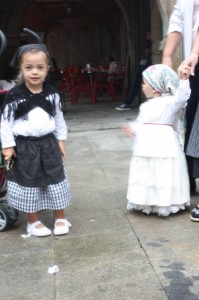 As well as that festival, on the weekend of the 8th, 9th and 10th July the town was also celebrating some kind of sea-faring event and the entire town was decked out with nets and small wooden boats and cut outs of octopus etc. It was therefore a double celebration and everyone was out to have a good time and so, we abandoned the pork and decided to join in…. and join in we certainly did until about 1am… drinking, eating, walking around and dancing.

On Saturday we saw what we think was some type of play about a marriage but the women were wearing black hats and there was a sea princess all in green???? We just made up stories to fit. We also managed a free sardine lunch. Having decided to go to the small fish market on the quay we asked for sardines. At first we seemed to be being told they didn’t have any but then we were given eight and told we didn’t have to pay – we think that what we were told in the first place was that they couldn’t sell them because they were too small. They seemed big enough to me and certainly as big as we get in Bury – so we weren’t complaining and they made for a great lunch with local bread, salad and wine.

Since last Saturday we have walked to Louro and the beaches we saw when motoring from Fisterra, been to Portosin and to Freixo and returned to Muros. The trip to Louro was undertaken on a lovely sunny day and when we saw the passage we had taken on Friday between the rocks we realised that there was more than enough room for about three cruise liners between the two sets of rocks and that the pilot had perhaps slightly exaggerated the need for extreme caution through the passage – though better safe than sorry.

Portosin has a good marina and we were also able to find fuel for the outboard and camping gaz – previous ports of call have not provided such amenities. However, the wi-fi wasn’t working – more Spanish internet fun. Other than that Portosin and Freixo, although the latter being a relatively secure anchorage, aren’t necessarily “must visit” places. 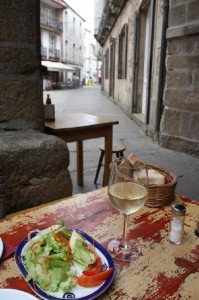 From Portosin we were able to take a bus ride to Noia which had a small but interesting old quarter and the biggest supermarket we have seen so far – about the size of a small Tesco!

So, having spent the week covering the grand total of 13.7 miles we are now back in Muros for the festival de Carmen and to meet up with Dave and Maggie.

Having arrived back early on Thursday, after re calibrating the autopilot in the calm waters en route, we decided to walk the opposite way out of Muros than our previous excursion- this time to Abelleira where we expected to find a beach bar to refresh us. Unfortunately, whilst we found a bar and several beaches they were not together and both were a bit further by road than we had anticipated. Still, it was a good nine or ten mile hike to add to the list and we did find a village full of the grain stores mentioned in an earlier entry. 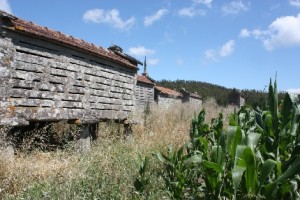 You will recall how I spoke of our disappearing oars. On our first stop in Muros we found a boat shop [rather than an Iron Mongers which every other town has had]. This shop had a sign saying Everything for the Boat [that being our rough translation of the sign in Spanish] and so we went inside. We were delighted that the guy in the shop had limited English but we were having trouble with “paddle” so Mike did a fantastic charade of “Michael row your boat ashore” and with that and a catalogue we managed to order two oars to be picked up on this, our return, visit. Not sure whether he decided we were complete idiots or just forgot – but the oars aren’t at the shop and neither is he. A very nice young woman who was there yesterday morning let us speak on the phone to the manager who said he would meet us later in the evening when the shop was again open after siesta time – but the shop was shut! So, the oar hunt continues….

So, last night [Friday] saw the opening night of the weekend festival with two bands which played from 10.00pm until 05.00am. We watched the stages being erected which is entertainment in itself. Two large articulated lorries turned into two stages with drop down lights, speakers, visual displays etc – all in about 4 hours. We didn’t actually go to watch the bands because there are two more tonight and three tomorrow and we are getting too old for 3 late nights in a row – so decided to give the pre-party party a miss. However, I did see and hear the bands still playing when I got up at 4.00am and looked to see what was happening and was then amazed when I took my first coffee outside at 9.00am to find the stages and articulated lorries gone. And yes, I had been back to bed between 4.00 and 9.00.

This post started with a Lancashire grey day and also ends with one. We have had great weather in between but clearly the Rias are living up to their reputation of one sea mist/foggy/grey day in every five or so. Actually, I think this one has followed Dave and Maggie from England – at least that’s what we will tell them when they arrive later.