Liverpool to Isles of Scilly

We did it! In the scheme of things to come it is a short journey but its our longest yet – and the Bay of Biscay does have a bit of a reputation.
But first a little bit about the Isles of Scilly. As others have reported it is rather like Cornwall but also rather like Brittany – which I suppose would be the case as Brittany is also like Cornwall! Beaches, old pubs, even pasties. There were lots of watersports taking place in the harbour – in particular something involving “gigs”. These look rather like a surf boat but narrower i.e. they are wooden, seat 8 [I think] rowers and a cox. The rowing action is quite unusual with one hand held over the oar and one under and a kind of sideways body action to the row. Apparently the gigs used to row out to meet ships as they came to harbour – they used to race each other there for the honour of getting their “pilot” aboard with the added bonus that he was the one that got paid – and the gig racing tradition has been carried on. Racing reputedly takes place on Wednesdays and Fridays and so, arriving on Monday and planning to stay until Wed morning meant we would miss it. However, we ended up staying Wednesday night as well – and sat on the back of the boat with a glass of rum and orange [yes orange – explanation below] waiting for it to happen – and waiting,…. and waiting. In the end we concluded that the reason it didn’t take place was the very reason we were still there on the Wednesday night i.e. wind and waves – though there were kite surfers out who were certainly taking full advantage of the elements and leaping out of the water in good style.
Provisioning was more or less completed on our main trip to Hugh Town on Tuesday. We needed Gaz [the appropriate vendor had shut by the time we finished internetting, printing documents and shopping] and also fancied a bit of fresh fish which, we had been told, was sold on the pier on Wednesdays. So, on Wednesday morning we made a rather wet trip across to the town to purchase aforesaid goods prior to leaving. Gaz was successful, fish not. Our friendly tourist information chap had omitted to say that whilst on the pier on Wednesday the fish lady did not arrive until three pm!
I have explained in an earlier posting that we have a habit of giving things names and our tender is called “The Pig”. Big Steve is responsible for the name because, living up to his title of “Big” he didn’t exactly get on well with a tender on a charter boat in Croatia some years ago and therefore christened it the Pig – a name which has stuck with all tenders since. Well the Pig certainly lived up to its name on the return journey – we were tossed about, water slapped all over the sides and getting off was a real joke as the Pig went up as the boat transom went down and vice versa, sloshing water everywhere and requiring us to time our move very carefully transitioning from one to the other. Even so, a change of clothes was required, but not until we had hauled it on deck, deflated it and lashed it down ready for the trip…. Which we then delayed making. You will probably have reasoned by now why we decided not to leave on Wednesday and it was certainly the right decision.
What it did mean was that our Tuesday evening “Sipsmith” Gin and “Fevertree” tonic [mmmm thanks Lesley] which we had planned as a very British evening tipple prior to leaving Britain wasn’t, after all, our last drink there. It was the rum and orange. Why? Well, when we left Rawtenstall we were hardly going to throw out bottles of alcohol so they all made their way to the boat meaning we have a cupboard of bottles all approx one third full which need drinking. The rum was at the top so of course that’s what we had to have and we tried it with Sprite which didn’t work so Mike made it with orange. Whether it was because it was the second one which made it taste good I’m not sure, but we celebrated our new found drink by having a third … and emptying the bottle in the process which was what we had set out to do – so all was well with the world.
As planned we were up and away at 5.30 the next morning to start our trip. The wind had dropped significantly, but not too much and we were able to hoist the sails as soon as we had negotiated the various buoys which steered us clear of the many dangers on the way out, including a cardinal with a bell in it. It would certainly be an eerie thing to pass in the fog – very ghost ship.
Our journey of 415 miles took 77hours and 15 minutes, over 62 of them done under sail which was pretty good we thought. It did mean that we had to put in a couple of tacks [the first one pointing us in the direction of Santander rather than A Coruna] but 15 hours later with a wind shift we were back on course, albeit very slowly at first.
On our first day out we saw a small whale. We weren’t sure at first whether it was a whale or a dolphin – but as it didn’t leap out of the sea at all and spouted water we concluded Whale. Our second day saw us spending most of it with some new found friends – absolutely fantastic 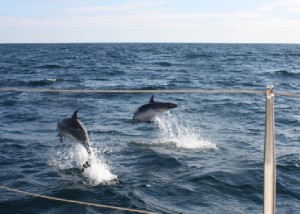 They played with us for hours and into the night when Mike had the pleasure of watching them glisten under the water with phosphorescence marking their path through the water. It was certainly worth getting up for when I took over.
For the journey we had decided to do two four hour shifts to get us through the night. Many people say two or three hours should be the pattern but having tried shorter shifts, it’s the shorter sleeping time that we have found debilitating. We therefore agreed on a 10pm – 2am and 2am – 6 am which seemed to work in the main. The worst one turned out to be the 10 until 2 shift because the early morning one, which we had expected to be the less pleasant, was actually fine with the dawn beginning to break from 3.30 and sun up an hour later. 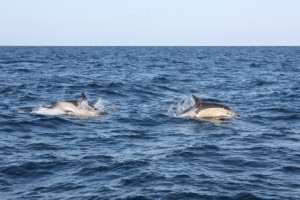 We were blessed with very clear, starry nights as well and also watched a planet [not sure which one] which rises shortly after the moon, make its trajectory across the night sky.
The wind, which had enabled us to make the second tack, and which was initially blowing seven knots, then five, then two-three [causing an engine on phase for three and a bit hours] started to pick up again mid way through day three. It continued picking up to the extent that we had to reef both genoa and main but the 20-23 knots of wind for nearly 12 hours sped us on our way… it was a rather uncomfortable way at times, making sleeping almost impossible [well for me, not Mike as he can sleep anywhere!]. The wind died again in the middle of night three and from 4.15 am we motored our way into A Coruna arriving at 11.45 am passing the Torre de Hercules as we entered.
I am sure that all passing mariners take this photograph – and probably make a better job of it but we had a slight mist making everything a bit hazy. The Torre de Hercules is the oldest working lighthouse in Europe, having been built originally by the Romans. Only the foundations of the original lighthouse actually remain – but even the newer structure is hundreds of years old – and pretty impressive. 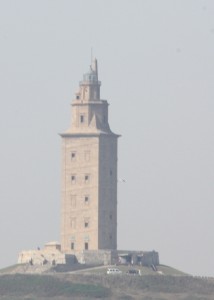 A Coruna was a welcome sight and has served us well. We are berthed with “the posh boats”. We have three 54 foot Amels alongside us [two of which are brand new and in transit]. We therefore look a bit like the poor relation – particularly when we decked the boat out with three loads of washing! A Coruna has an old town, “glass” houses [the fronts have glassed in terraces so that the original owners could watch over their business in the harbour] and four streets of Tapas bars. We only sampled three [bars that is… not whole streets] and enjoyed very much the seafood tapas on offer. 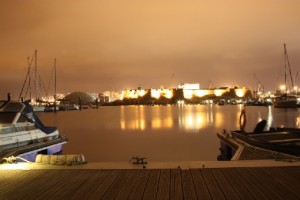 We are leaving today and are planning several nights at anchor off a variety of small villages, so we aren’t sure what internet connection there may be. So, its off to the fish market first and we will be in touch again as soon as we can